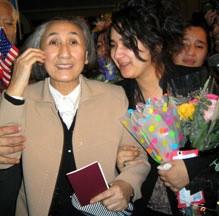 The Ten Conditions of Exile

The family of Uyghur rights advocate Rebiya Kadeer have struggled to come to terms with her utter commitment to the cause, writes Catherine Gough-Brady

It was the producers of The 10 Conditions of Love who suggested the star of their film, Uyghur rights advocate Rebiya Kadeer, should come to Australia for the Melbourne International Film Festival. They could not have anticipated the controversy and publicity this would create. The country is now abuzz with talk of the Uyghur people’s plight and what is happening in East Turkestan — and today there are reports that Chinese officials have attempted to stop Kadeer giving an address to the National Press Club.

Seven years ago in Beijing, the director of The 10 Conditions of Love, Jeff Daniels, struck up a conversation with a Uyghur student. As a result he went to East Turkestan to see for himself what was happening there. He saw the program of Han patriation in full swing: Uyghur slums were being demolished and new high-rise buildings erected for migrating Han Chinese.

At the time, Daniels was an inexperienced filmmaker, whose main work had been researching and assisting assistant-editors. He knew enough, however, to ask journalists in the region whether it was safe for him to film Uyghurs and talk to them about their political situation. He was told that if he did, not only would he be deported, but the person he talked to would be disappeared. So he filmed the landscape.

Once out of China, Daniels made contact with the exiled Uyghur Diaspora. When Rebiya Kadeer was released into conditional exile in the US, he realised he had finally found the central character for what would otherwise have been a “five minute current affairs news piece”. Daniels describes the heroine of this documentary as a “very strong woman who wants people to understand her point of view”. Since 11 September 2001 the Chinese Government has labelled Kadeer a Muslim terrorist.

The film reveals that Kadeer’s life has been full of adversity. She is outcast as a “capitalist” and separated from her children, but works her way out of poverty to become extraordinarily rich. She proposes to her life-partner by saying they should marry because it will be good for her, good for him, and good for the Uyghur people. He writes her a book of 106 poems as his “yes” and escapes to the US to avoid arrest. She is imprisoned, and, after six years of lobbying, released on “conditional” exile — the condition being that she remain silent on the Uyghur issue. She immediately breaks the condition, and now, as retribution, some of her children are in jail penning letters denouncing their mother as the mastermind of the recent riots in East Turkestan.

Yet despite Kadeer’s epic journey and commanding presence, the most compelling character in the documentary is in fact her eldest daughter. The daughter, who lives in the US, has to deal with the everyday practicalities of her mother’s grand vision. She volunteer project-manages her mother’s lobbying functions. She is angry with her mother, but also proud of her.

This personal conflict set within the bigger story of national conflict comes to a climax near the end of the film. There is an intimate scene between Kadeer, her daughter and the director. Kadeer is talking in Uyghur about the arrest of her children and her struggle for Uyghur rights. The daughter is in frame and you can see her reaction as her mother speaks, but there are no subtitles and so we don’t really know what Kadeer has just said.

Then the daughter translates. Her disagreement with her mother’s decision to place the needs of the Uyghur before the needs of their family is obvious, and yet she continues her accurate translations of her mother’s words. It is fascinating to watch, and illustrates the stark difference between the two women: Kadeer is an idealist; her daughter a humanist.

When the Chinese Government learnt of Kadeer’s impending visit to Australia, their consul called MIFF organisers to request the film be withdrawn. Festival director Richard Moore declined the request.

The decision to welcome Kadeer as a guest resulted in a number of films from China and associated territories being withdrawn from the festival programme. It is believed the filmmakers were pressured into this action. Also, the festival’s communication systems, phone, fax, email and website have been periodically blocked by overuse. Jeff Daniels’ Youtube channel has attracted comments that would make a Deadwood character blush.

However, the filmmakers have not been the target of cyber attacks, and producer John Moore says: “We have not received a single skerrick of bother from the Chinese, except a fairly civilised interaction with a Chinese agency journalist — who promptly seriously misquoted Jeff and later admitted it.”

Jeff Daniels thinks that the Chinese Government’s reaction to the film was aimed at the Chinese media, not at the Western media, and would have worked to consolidate existing prejudice against Kadeer in China.

As an ex-New Yorker who experienced the destruction of the Twin Towers, Daniels says he can understand the angry reaction of individual Chinese who have been told that Kadeer is a terrorist. He says:

“I was in New York during 9/11 and my emotions were running very raw at that time. I did not feel that our government would be responsible for this. It was someone else. And who was it? When Osama bin Laden came out … immediately we wanted to blame him, we could put a face to our anger. I even heard that Osama bin Laden may be in China, and I accepted that. China was saying there are a lot of angry Muslims living in their western province, [so I thought] ‘Yeah, Osama Bin Laden’s there’. I didn’t even care what the facts were, I was just looking to blame someone.

“So, I think that is what a lot of people in China are going through. There are thousands of people who are connected to the deaths that took place in Xinjiang, and they are going to look for someone to blame. If the Government says, ‘It is Rebiya Kadeer!’, then [for these people] it is Rebiya Kadeer.”

The 10 Conditions of Love is a film made by a director with a socially just outlook, not an artistic vision. The general reviews have been less than enthusiastic. This is partly because the film has attracted far more attention then a film of its calibre usually would. At times, the voiceover is underdeveloped and the cinematography can be awkward. Indeed, the reasons to traipse down to the cinema to see it are to explore an amazing story of adversity, find out more about the Uyghur, and to see what all the fuss is about — not to have your understanding of film language challenged. Once you have your expectations correctly set, then the film keeps you engaged from beginning to end.

John Moore says on the publicity and resulting distribution deals the film has generated, “We wouldn’t have had a sniff in normal circumstances. Sure, we were always going to generate good publicity, even without the 5 July incidents in Xinjiang and the Chinese response to MIFF, but it would not have led to this global media storm. We have a cinema release now in Melbourne, Adelaide and Perth and currently negotiating Sydney and possibly Canberra. Discussions are also underway internationally.”

For a documentary that both SBS and ABC turned down, that’s quite a coup.