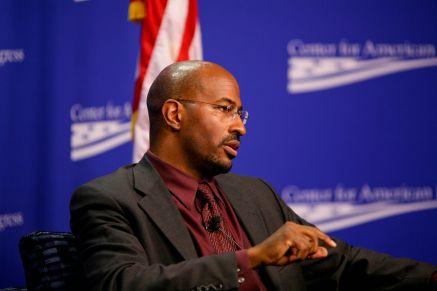 Oy, the long reach of 9/11 complicity… here we are, eight years later, and the man credited with colorizing the environmental movement with his Clean Energy Jobs Bill, that House Speaker Nancy Pelosi embraced, has resigned from the Obama Administration. Right wing neocons pushed for Van Jones’ dismissal citing his “coarse rhetoric” and thought crime. The thought crime is 9/11 Truth, and the vulgarity was calling Republicans “assholes.”

“White House officials offered tepid support Friday for Van Jones, the administration’s embattled energy efficiency guru, who has issued two public apologies this week, one for signing a petition that questioned whether Bush administration officials ‘may indeed have deliberately allowed 9/11 to happen, perhaps as a pretext for war.'”

“Earlier, Jones said he was ‘clearly inappropriate’ in using a crude term to describe Republicans in a speech he gave before joining the administration.

“The apologies did little to quell objections from Republicans, several of whom demanded Friday further action against Jones. Rep. [Right-wing neoconservative] Mike Pence (Ind.) called on the adviser to resign or be fired, saying in a statement, ‘His extremist views and coarse rhetoric have no place in this administration or the public debate.'”

“I am resigning my post at the Council on Environmental Quality, effective today,” Jones said in a statement dated Sept 5 released around midnight on Sept 6.

“Extreme rhetoric” Where have we heard that before? Oh, right… those who doubt the official 9/11 conspiracy theory and who note the obvious use of 9/11 by the previous administration to justify Middle East wars and numerous new “laws” that dismantle the U.S. Constitution. No, they couldn’t have used 9/11 as an opportunity to advance imperial aims! To steal Middle East oil? To spy on U.S. citizens? To turn this once free nation into Big Brother on electroids? (That’s electrons on steroids:)

But note that Van Jones only offered speculation: “may” and “perhaps” are words used when hypothesizing, not affirming something. For anyone to be fired for speculative rhetoric is to criminalize thought. We know the Rethugs are infamous for suppressing dissent, as the body of law enacted under Bush reveals.

And, as for coarse rhetoric, puh-leeze. Tell me, did Van Jones tell a U.S. Senator to ‘fuck himself?’ No, Vice President Dick Cheney did that. Here’s the “coarse” comment by Jones:

Okay, from my perspective, this is a pretty lame excuse for Democratic Party wimplicity. But note in this speech segment, he also admits that he, too, “can be an asshole.”

Sorry, the f-bomb is worse in anybody’s book.

Can the neocons cut a little slack in the common speech department? Or are the brownshirts still insisting they get to be treated differently than their comrades across the aisle? (Like, they write laws for us but don’t have to obey ones written for them, e.g. habeas corpus, no wars of aggression, humane treatment of prisoners, etc.) More importantly, perhaps, will the Democrats ever stand up to them?

What they really don’t like, it’s easy to speculate, is that Van Jones has a vision of using our transition away from oil-based energy to employ tens of thousands of unemployed blacks. You gotta love a guy who compares Bush’s quest for oil (damn the lives, damn the environment) to that of a crackhead licking the bowl:

Seriously, though, Van Jones is an icon, critiqued and applauded last January in a 6,ooo-word New Yorker piece by Elizabeth Kolbert. Greenbuild’s executive director, Gary Kaplan, thinks highly of him:

“Van is the Martin Luther King of the green-jobs movement. You need a leader who convinces people we’ve just got to do this, because there are always going to be a lot of obstacles.”

The Nathan Cummings Foundation thought highly of him, too. They gave him close to half a million dollars to incite green companies to relocate to Oakland, California. His efforts yielded no new jobs, however.

She noted other criticism, too: “Economists generally agree that the key to addressing climate change is to raise the cost of burning fossil fuels, either directly, through a carbon tax, or indirectly, through a cap-and-trade program…. But it’s not at all clear that the number of jobs created by, say, an expanding solar industry would be greater than the number lost through, say, a shrinking coal-mining industry. Nor is it clear that a green economy would be any better at providing work for the chronically unemployed than our present, ‘gray’ economy has been.”

Yes, we’re sure the professional class can devise a scheme that taxes poor and working people for corporate destruction of the environment, while remaining oblivious to our daily choices between food, gas and medicine. The “chronically unemployed” did not devise coal plants or oil wells; we inherited the system imposed on us. We don’t have the funds, nor the desire, to pay for systemic error we had no part in creating.

The Clean Energy Jobs Bill eventually was absorbed by the much larger Energy Independence and Security Act, which Bush signed into law in December 2007. Kolbert reported, “Obama has said that as President he wants to generate five million such jobs, and his stimulus package is expected to contain billions of dollars for this purpose.”

Can Van Jones’ vision be anything more than a green boondoggle? Maybe the better question is, can our transition to clean energy be any worse than staying with oil, gas and coal?

As to thought crime, have the oil barons taken out Jones for questioning the obvious, or because his green jobs for black folk plan might actually work?