HE’S COMING FOR OUR CHILDREN!!! 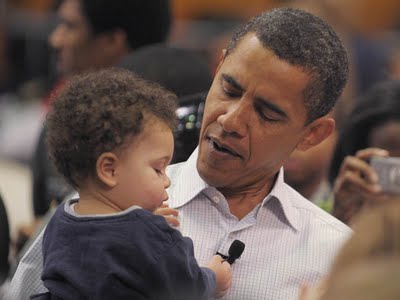 Last week when the White House announced that President Obama would be giving a little speech to the nation’s children, encouraging them to stay in school and study hard so they might go far in life, who in their right mind could have possibly predicted the shit storm of outrage that is now emanating from the extreme right? Actually, I did predict it – but I am of my right mind – honest, I am! It’s just that these knuckleheads are so damned predictable. The sun will rise. The moon will set. Republicans will behave like assholes. It is really as simple as that.

I did the research. At the very least, every president since Hoover at one time or another used the classroom as a political prop. In the past, there had only been a hint of disdain from certain political corners for such events. Of course in 2009 things are a little different. In case you haven’t noticed, Barack Obama is not Herbert Hoover.

It’s things like this that make my job such a joy. The mind-numbing stupidity of these people never ceases to amuse, believe me. When Ronald Reagan addressed America’s school children during his term and went as far as lecturing them on the importance of tax cuts, there was barely a whimper from the Left.Why the big fuss now? What the hell is the big deal? Let’s stop kidding ourselves. This is racism at its ugliest. Our darling children must be protected from the socialistic ideas of the Big, Bad Negro. Oh, brother!

Could the basis for their paranoia be that Obama really is the hard core lefty that people like Glenn Beck and Rush Limbaugh are portraying him to be? To quote Joan Rivers, “Can we talk?” Here’s the dirty little secret: He ain’t. He isn’t even close to being one. If he were, people who lean left-of-center (like yours truly does) wouldn’t be as disappointed in his performance thus far as we obviously are.

My only consolation in recent months has been the fact that the guy is not George W. Bush. As I said shortly after last year’s election, Bush was such a monumentally awful president, even Obama’s failures will look like brilliant statecraft by comparison. Although that has certainly turned out to be true, to be honest with you I was still expecting a bit more from this president. The good news is that at this writing we’re barely eight months into his presidency. We will see where we are a year or two from now. To write Obama off now, as more-than-a-few Progressives seem to be doing, would be a great mistake.

Here is yet another example (as if any more were really needed) of how the Republican party has moved so far to the fringe Right in the last thirty years, they are in serious danger of falling off the face of the earth. How anyone could possibly interpret the president’s remarks to read that he is trying to indoctrinate American children in “socialistic ideology” – when those remarks have not even been written yet – is beyond idiotic. We’re talkin’ full-blown lunacy here! It is also another clear example of the eye-popping stupidity of more than a few Americans.

Is Barack Obama such a clear and present danger to these nitwits that they would feel compelled to protect their children from him by keeping them home when he speaks? Are they that insecure? It would seem to me that we should have turned the corner with regard to our irrational racial fears decades ago. As with Bill Clinton, they are stopping at nothing in order to torpedo this president’s agenda. As I’ve stated on this site more than opnce the GOP’s only hope for political salvation is the complete and utter failure of the Obama administration and, thus, the American people. They want unemployment figures to go into the double digits. At this moment they are doing everything humanly possible to see to it that that happens.

What could the president possibly say in a ten minute chat that would conceivably send these kids head first into the abyss of Communist ideology? It staggers the imagination but let’s give it a try, shall we?

“Hello, comrades – uhh, I mean, boys and girls – I’m the president! You know, kids, in this grand and glorious land of ours, we have something called “religious freedom”. You know darned well what that means, don’cha? It means that you can worship God in anyway you choose without fear of persecution! Do you know what “persecution” means, kiddies? To be persecuted means to be picked on by mean people for no good reason. A very great man once said, ‘It does me no injury for my neighbor to say that there are twenty gods – or no God. It neither picks my pocket nor breaks my leg.’ Gee! He sure must have been a really smart man! I hope that each and very one of you children grow up to be just as smart – and maybe even smarter – than he was!”

DID YOU HERE THAT, MARTHA??? That black son-of-a-bitch is trying to wash the brains of our good American children! Did’ja hear him? He was quotin’ Karl Marx or Emma Goldman or Ed Asner or one of those evil-doin’, Commie Bastards!

Actually, it was Thomas Jefferson but who’s keeping score?

Yes, Virginia, there are some jackasses out there who believe that Obama is trying to convert their kids into a new generation of Pravda subscribers. My message to them? Just relax and take a nice, deep breath. As someone recently remarked, this in not a policy speech, it’s a pep talk. For all his minor flaws, this president really believes in education. His is the classic American success story in which the education he received plays a crucial role in the plot line. He wants to inspire the littlest of us to climb the highest mountains of achievement. What the hell is wrong with that? What’s the matter with you people?

You would think the way some of you have been acting that the president is some kind of pervert stalking the neighborhood school bus stop, ready to expose himself. He means your children no harm. He’s not trying to turn the little darlin’s into Socialists – or even Democrats for that matter. Hell, for all we know he might even inspire one of them to greatness! It’s a fairly safe bet that one day more than one of those kids will grow up to be the president of the United Sates of America! Let them be inspired.

In the spring of 1963, sixteen-ear-old Bill Clinton met John F. Kennedy in the Rose Garden of the White House. Did that now-historic meeting inspire Clinton? More than likely. One day in the late 1880s, James Roosevelt, a gentleman farmer from Dutchess County, New York, bought his five-year-old son, Franklin Delano, to the Executive Mansion (as the White House was then officially called) to meet President Grover Cleveland. Said the president to the boy:

“Little man, I’m going to make a strange wish for you. I wish that you never become president.”

Just like FDR to spite the old bastard. Maybe old Grover was onto something there. Franklin D. Roosevelt is remembered today in the same way that Cleveland is all-but-forgotten.

So just sit back and relax, folks. Barack Obama is only performing a routine presidential duty that has been performed by presidents for generations. There’s nothing to be afraid of. He’s not trying to turn your babies into mini Marxists. This isn’t the Trotsky For Toddlers program. The president of the United States merely wants to have a heart to heart talk with the children of America about the importance of a good education, that’s all. I promise you, we Progressives do not believe in evil, subliminal messages. Chill out!

One response to “HE’S COMING FOR OUR CHILDREN!!!”