The Van Jones Affair: An ‘Unfriendly Environment’ for Progressives at the White House 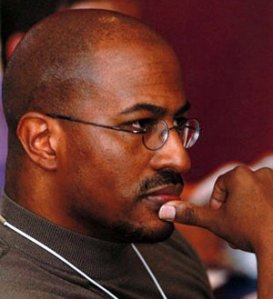 A shining progressive star of the Obama administration was unceremoniously dismissed to satisfy the McCarthyites of the GOP. But it must be noted that

Jones’ “talents are best put to use outside of this ‘progressive-unfriendly’ administration.”

If one assumes that color is no hindrance in the Obama White House, then the conclusion is obvious: Van Jones, co-founder of Oakland, California’s Ella Baker Center for Human Rights and the internet activist organization Color of Change, was ejected because of his progressive politics. There is more than a subtle difference between being hounded from office and being thrown to the dogs.

Glenn Beck’s and the GOP’s regurgitated McCarthyism – of which Obama, himself, is the main target – is as transparent as it is vicious. But remember that Sen. Joseph McCarthy, the 1950s Red-hunter, could not personally fire anyone outside his own staff. Neither could the many freelance witch-hunting vigilante outfits of the era. McCarthyism’s many thousands of victims were laid low by employers and college deans and such who acted on the diabolical politician’s charges. Glenn Beck didn’t fire Van Jones, Obama did.

Or, to be more technically correct, the president and Jones’ boss, Nancy Sutley, chair of the White House Council on Environmental Quality, accepted his resignation. Although often referred to as the White House “green-jobs czar,” Jones was officially a Special Advisor for Green Jobs, Enterprise and Innovation, one of nearly thirty special advisors in various disciplines scattered about the White House, most of whom are not required to be confirmed by Congress. Obama’s spin doctors encouraged the media to call these advisors “czars,” doubtless because some, like Jones, represented otherwise under-served political constituencies that the president wanted to feel empowered. Jones described himself as “the green jobs handyman,” and said “there’s no such thing as a green-jobs czar.”

As is clear in light of events, Jones’ version was much closer to the truth. The Obama administration, thoroughly corporate at its core, guided by the profoundly conservative philosophy that “a rising tide lifts all boats,” has invented new White House positions to give the impression of political diversity, jobs that were intended as a kind of window dressing. With great fanfare, for example, Obama announced creation of the White House Director of Urban Affairs – and then filled the post with former Bronx, New York, Borough President Adolfo Carrion, a political hack whose imagination has never ventured beyond the next campaign check from the real estate industry.

Jones is anything but a hack, nor would he consent to be mere widow dressing. In making his now-infamous “Republicans are assholes” remark, Jones declared that “some of us who are not Barack Hussein Obama are going to have to start getting a little bit uppity.” The uppity Jones got slapped down by his own president, who behaves as if progressives are his primary problem in forging a grand, “nonpartisan” consensus.

Progressives were made unwelcome at White House forums on health reform, lest they spoil Obama’s courtship of Republicans and the drug and insurance companies they serve. Now Jones has been unceremoniously discarded so that Obama might reconcile with modern-day McCarthyites. It is not unreasonable to describe Obama’s White House as an unfriendly environment for progressives, and getting worse.

Jones’ talents are best put to use outside of this “progressive-unfriendly” administration. It is a historically misleading cliché, most often bandied about by Black Republicans and other rascals, that one has to be on the “inside” to effect real change. What is most desperately needed are political instruments to exert pressure on this administration from the Left, especially Black-led instruments. Had such formations existed in sufficient strength, perhaps Jones would not have been so peremptorily dismissed. But then, lots of things might be different if the Black Left stopped behaving like Obama camp followers and groupies, immune to insult. It’s downright racially embarrassing, and earns us nothing but contempt.

BAR executive editor Glen Ford can be contacted at Glen.Ford@BlackAgendaReport.com.

Here are some more article annotations from this week’s BAR:

The President, Progressives and the Myth of the Robust Public Option

The good news is that progressives in Congress are insisting on a “robust public option” in any health care legislation that will drive down coverage prices and be available to anybody who wants it.  The bad news is that they knew insurance lobbyists and the president’s negotiators had crippled the public option months ago and remained silent until public dissatisfaction made them speak up.  Why didn’t they fight for their “robust public option” in May and June, when it might have actually been written into the bill?  And how can they portray the public option an appropriate negotiating fallback from single payer when they never fought very hard to put it on the table in the first place?

The only beneficiaries of President Obama’s educational policies “will be the testing and charter school corporations.” The president’s top executive for educational business affairs, Arne Duncan, is free to treat the nation’s schools as his “portfolio.” Unfortunately, “children performing below grade level, or in need of special education are not welcome in corporate education land.”
Read more

Eshu’s blues: The president holds forth on education

Barack Obama has as much right as his predecessors to dispense bromides to children. “But there is a profound falsehood being told when he claims the families of public school students, or teachers have done ‘everything we can’ to make sure that kids have what they need to succeed in school.”
Read more

If the Afghanistan-Pakistan war is a necessity, then it certainly must be escalated. President Obama’s framing of the conflict leaves no room for peace, yet purported peace activists refuse to confront him. Such a movement is not simply shallow: “it is a fraud.”

Doing Business in the USA: A Culture of Thievery

Cheating one’s employees is as American as apple pie, according to a new study. Two-thirds of low-wage workers are routinely robbed by their bosses, hard evidence of “a festering culture of business thievery at work – something deeply embedded in the way this society operates.”
Read more

On health care, Barack Obama “has become a heavy burden for even the Black Caucus to bear, as he searches constantly for allies on the Right.” As Obama threatens to jettison the issue of racial disparities from his “reform” proposals, Black lawmakers must reassess their loyalties.

“Your Name is Common”: Racial Profiling in the US

People from certain cultures or bearing certain names have no rights that public and private American institutions are bound to respect. “Their ‘foreign marks’ make them suspects” in a nation bent of discovering enemies and “others” unworthy of treatment as human beings.

Dr. Michael Hudson is a real economist, one of those who not only accurately predicted the current economic downturn well in advance, but explains its causes and consequences in plain understandable language.  According to Dr. Hudson, the federal government, mostly under Barack Obama, has given the financial sector $13 trillion, the most massive transfer of wealth to Wall Street in history.  The financial sector is poised, Dr. Hudson asserts, to bleed the US economy dry.

5 responses to “The Van Jones Affair: An ‘Unfriendly Environment’ for Progressives at the White House”