Opium, Rape and the American Way 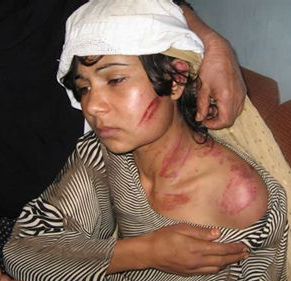 The warlords we champion in Afghanistan are as venal, as opposed to the rights of women and basic democratic freedoms, and as heavily involved in opium trafficking as the Taliban. The moral lines we draw between us and our adversaries are fictional. The uplifting narratives used to justify the war in Afghanistan are pathetic attempts to redeem acts of senseless brutality.

War cannot be waged to instill any virtue, including democracy or the liberation of women. War always empowers those who have a penchant for violence and access to weapons. War turns the moral order upside down and abolishes all discussions of human rights. War banishes the just and the decent to the margins of society. And the weapons of war do not separate the innocent and the damned. An aerial drone is our version of an improvised explosive device. An iron fragmentation bomb is our answer to a suicide bomb. A burst from a belt-fed machine gun causes the same terror and bloodshed among civilians no matter who pulls the trigger.

“We need to tear the mask off of the fundamentalist warlords who after the tragedy of 9/11 replaced the Taliban,” Malalai Joya, who was expelled from the Afghan parliament two years ago for denouncing government corruption and the Western occupation, told me during her visit to New York last week. “They used the mask of democracy to take power. They continue this deception. These warlords are mentally the same as the Taliban. The only change is physical. These warlords during the civil war in Afghanistan from 1992 to 1996 killed 65,000 innocent people. They have committed human rights violations, like the Taliban, against women and many others.”

“In eight years less than 2,000 Talib have been killed and more than 8,000 innocent civilians has been killed,” she went on. “We believe that this is not war on terror. This is war on innocent civilians. Look at the massacres carried out by NATO forces in Afghanistan. Look what they did in May in the Farah province, where more than 150 civilians were killed, most of them women and children. They used white phosphorus and cluster bombs. There were 200 civilians on 9th of September killed in the Kunduz province, again most of them women and children. You can see the Web site of professor Marc Herold, this democratic man, to know better the war crimes in Afghanistan imposed on our people. The United States and NATO eight years ago occupied my country under the banner of woman’s rights and democracy. But they have only pushed us from the frying pan into the fire. They put into power men who are photocopies of the Taliban.”

Afghanistan’s boom in the trade in opium, used to produce heroin, over the past eight years of occupation has funneled hundreds of millions of dollars to the Taliban, al-Qaida, local warlords, criminal gangs, kidnappers, private armies, drug traffickers and many of the senior figures in the government of Hamid Karzai. The New York Times reported that the brother of President Karzai, Ahmed Wali Karzai, has been collecting money from the CIA although he is a major player in the illegal opium business. Afghanistan produces 92 percent of the world’s opium in a trade that is worth some $65 billion, the United Nations estimates. This opium feeds some 15 million addicts worldwide and kills around 100,000 people annually. These fatalities should be added to the rolls of war dead.

Antonio Maria Costa, executive director of the United Nations Office on Drugs and Crime (UNODC), said that the drug trade has permitted the Taliban to thrive and expand despite the presence of 100,000 NATO troops.

“The Taliban’s direct involvement in the opium trade allows them to fund a war machine that is becoming technologically more complex and increasingly widespread,” said Costa.

The UNODC estimates the Taliban earned $90 million to $160 million a year from taxing the production and smuggling of opium and heroin between 2005 and 2009, as much as double the amount it earned annually while it was in power nearly a decade ago. And Costa described the Afghan-Pakistani border as “the world’s largest free trade zone in anything and everything that is illicit,” an area blighted by drugs, weapons and illegal immigration. The “perfect storm of drugs and terrorism” may be on the move along drug trafficking routes through Central Asia, he warned. Profits made from opium are being pumped into militant groups in Central Asia and “a big part of the region could be engulfed in large-scale terrorism, endangering its massive energy resources,” Costa said.

“Afghanistan, after eight years of occupation, has become a world center for drugs,” Joya told me. “The drug lords are the only ones with power. How can you expect these people to stop the planting of opium and halt the drug trade? How is it that the Taliban when they were in power destroyed the opium production and a superpower not only cannot destroy the opium production but allows it to increase?

“And while all this goes on, those who support the war talk to you about women’s rights. We do not have human rights now in most provinces. It is as easy to kill a woman in my country as it is to kill a bird. In some big cities like Kabul, some women have access to jobs and education, but in most of the country the situation for women is hell. Rape, kidnapping and domestic violence are increasing. These fundamentalists during the so-called free elections made a misogynist law against Shia women in Afghanistan. This law has even been signed by Hamid Karzai. All these crimes are happening under the name of democracy.”

Thousands of Afghan civilians have died from insurgent and foreign military violence. And American and NATO forces are responsible for almost half the civilian deaths in Afghanistan. Tens of thousands of Afghan civilians have also died from displacement, starvation, disease, exposure, lack of medical treatment, crime and lawlessness resulting from the war.

Joya argues that Karzai and his rival Abdullah Abdullah, who has withdrawn from the Nov. 7 runoff election, will do nothing to halt the transformation of Afghanistan into a narco-state. She said that NATO, by choosing sides in a battle between two corrupt and brutal opponents, has lost all its legitimacy in the country.

The recent resignation of a high-level U.S. diplomat in Afghanistan, Matthew Hoh, was in part tied to the drug problem. Hoh wrote in his resignation letter that Karzi’s government is filled with “glaring corruption and unabashed graft.” Karzi, he wrote, is a president “whose confidants and chief advisers comprise drug lords and war crimes villains who mock our own rule of law and counter-narcotics effort.”

Joya said, “Where do you think the $36 billion of money poured into country by the international community have gone? This money went into the pockets of the drug lords and the warlords. There are 18 million people in Afghanistan who live on less than $2 a day while these warlords get rich. The Taliban and warlords together contribute to this fascism while the occupation forces are bombing and killing innocent civilians. When we do not have security how can we even talk about human rights or women’s rights?”

This election under the shade of Afghan war-lordism, drug-lordism, corruption and occupation forces has no legitimacy at all,” she said. “The result will be like the same donkey but with new saddles. It is not important who is voting. It is important who is counting. And this is our problem. Many of those who go with the Taliban do not support the Taliban, but they are fed up with these warlords and this injustice and they go with the Taliban to take revenge. I do not agree with them, but I understand them. Most of my people are against the Taliban and the warlords, which is why millions did not take part in this tragic drama of an election.”

“The U.S. wastes taxpayers’ money and the blood of their soldiers by supporting such a mafia corrupt system of Hamid Karzai,” said Joya, who changes houses in Kabul frequently because of the numerous death threats made against her. “Eight years is long enough to learn about Karzai and Abdullah. They chained my country to the center of drugs. If Obama was really honest he would support the democratic-minded people of my country. We have a lot [of those people]. But he does not support the democratic-minded people of my country. He is going to start war in Pakistan by attacking in the border area of Pakistan. More civilians have been killed in the Obama period than even during the criminal Bush.”

“My people are sandwiched between two powerful enemies,” she lamented. “The occupation forces from the sky bomb and kill innocent civilians. On the ground, Taliban and these warlords deliver fascism. As NATO kills more civilians the resistance to the foreign troops increases. If the U.S. government and NATO do not leave voluntarily my people will give to them the same lesson they gave to Russia and to the English who three times tried to occupy Afghanistan. It is easier for us to fight against one enemy rather than two.”

Chris Hedges, whose column is published on Truthdig every Monday, spent two decades as a foreign reporter covering wars in Latin America, Africa, Europe and the Middle East. He has written nine books, including “Empire of Illusion: The End of Literacy and the Triumph of Spectacle” (2009) and “War Is a Force That Gives Us Meaning” (2003).