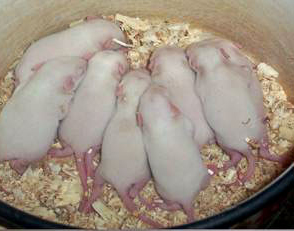 In what is being described as the first ever and most comprehensive study of the effects of genetically modified foods on mammalian health, researchers have linked organ damage with consumption of Monsanto’s GM maize.

Three varieties of Monsanto’s GM corn – Mon 863, insecticide-producing Mon 810, and Roundup® herbicide-absorbing NK 603 – were approved for consumption by US, European and several other national food safety authorities.  The data used for this approval, ironically, is the same data that independent researchers studied to make the organ damage link.

The Committee of Independent Research and Information on Genetic Engineering (CRIIGEN) and Universities of Caen and Rouen obtained Monsanto’s confidential raw data of its 2002 feeding trials on rats after a European court made it public in 2005.

The data “clearly underlines adverse impacts on kidneys and liver, the dietary detoxifying organs, as well as different levels of damages to heart, adrenal glands, spleen and haematopoietic system,” reported Gilles-Eric Séralini, a molecular biologist at the University of Caen.

Although different levels of adverse impact on vital organs were noticed between the three GMOs, the 2009 research shows specific effects associated with consumption of each, differentiated by sex and dose.

Their December 2009 study appears in the International Journal of Biological Sciences (IJBS). This latest study conforms with a 2007 analysis by CRIIGEN on Mon 863, published in Environmental Contamination and Toxicology, using the same data.

“The analyses conducted by these authors are not consistent with what has been traditionally accepted for use by regulatory toxicologists for analysis of rat toxicology data.”

Séralini explained that their study goes beyond Monsanto’s analysis by exploring the sex-differentiated health effects on mammals, which Doull, et al. ignored:

“Our study contradicts Monsanto conclusions because Monsanto systematically neglects significant health effects in mammals that are different in males and females eating GMOs, or not proportional to the dose. This is a very serious mistake, dramatic for public health. This is the major conclusion revealed by our work, the only careful reanalysis of Monsanto crude statistical data.” [Communication to author]

Other problems with Monsanto’s conclusions

When testing for drug or pesticide safety, the standard protocol uses three mammalian species. The subject studies only used rats, yet won GMO approval in more than a dozen nations.

Chronic problems are rarely discovered in 90 days; most often such tests run for up to two years. Tests “lasting longer than three months give more chances to reveal metabolic, nervous, immune, hormonal or cancer diseases,” wrote Seralini, et al. in their Doull rebuttal. [See “How Subchronic and Chronic Health Effects can be Neglected for GMOs, Pesticides or Chemicals.” IJBS; 2009; 5(5):438-443.]

Further, Monsanto’s analysis compared unrelated feeding groups, muddying the results. The June 2009 rebuttal explains, “In order to isolate the effect of the GM transformation process from other variables, it is only valid to compare the GMO … with its isogenic non-GM equivalent.”

The researchers conclude that the raw data from all three GMO studies reveal novel pesticide residues will be present in food and feed and may pose grave health risks to those consuming them.

They have called for “an immediate ban on the import and cultivation of these GMOs and strongly recommend additional long-term (up to two years) and multi-generational animal feeding studies on at least three species to provide true scientifically valid data on the acute and chronic toxic effects of GM crops, feed and foods.”

Human health, of course, is of primary import to us, but ecological effects are also in play. Ninety-nine percent of GMO crops either tolerate or produce insecticide. This may be the reason we see bee colony collapse disorder and massive butterfly deaths. If GMOs are wiping out Earth’s pollinators, they are far more disastrous than the threat they pose to humans and other mammals.

Impacts of Genetically Engineered Crops on Pesticide Use: The First Thirteen Years, The Organic Center

Jan. 2 Update: The words “either tolerate or” were added to the last paragraph. I regret any confusion the error may have caused.

Special thanks goes to our very own Oz, who gave me the lead.

Published in the March issue of Z Magazine.