Notes from Mutant Message from Forever 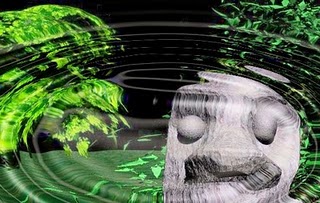 Last week I picked up a book that I’d read awhile ago, Mutant Message from Forever, published in 1998 and it opened to page 248. It’s about the Australian aboriginal people, written by Marlo Morgan and dedicated to Burnum Burnum, Elder of Wurundjeri Tribe.

I’m still grappling with this wisdom; see what you think:

“Earlier someone mentioned that our people could become undetectable. Mutants coming to save, civilize and rescue us from ourselves could not see us. Years ago I was told that in former times our race could perform illusion and disappear. ..

“It isn’t a trick. It is a basic way of life that developed into disappearing because of the consciousness of warriors and aggressors. If someone came to harm you, someone with a gun, and you were one of the Real People, what could you do? You had no weapon. You wouldn’t use it if you did. You were in control of your energy distribution and knew you could not die. You were Forever. So you did not even entertain the emotion of fear. You did not judge this person pointing a gun at you as being wrong. You realized that he was expressing himself at the highest level he would allow himself to be. For him, it was perfect. He was not making a mistake. For him, that was his rightful place at that time.

“You did observe what was taking place but refused to feed what smelled and tasted unpleasant to you. So you selectively channeled your energy and felt what you believed was right for all of life everywhere. Whenever possible, the best posture is standing, your feet slightly apart, your hands at your side, palms open, facing the challenger. Then you envisioned sparkling light, the spirit energy coming from the earth up through your feet and legs, filling your whole body. Every cell was full of this perfection. You sent this beauty out, beamed it out to the gun bearer. You did not move a muscle yet you hugged and surrounded this person intent on taking your life. You sent him total acceptance, respect, understanding, and love. You talked to the person silently, in head-to-head, heart-to-heart talk.

“It was important that you explained in this silence, to this man, that he was not making a mistake. That he had never made a mistake. No one can make a mistake. We are traveling from the same source back to the same Source and all are given the same gift. In every circle there is always one last portion of the line to be completed and so it is with us. He, too, was a part of the perfection and it was okay for him to choose this action. That does not mean you agree, or condone it, but you do not judge him. You love the person, not his action.

“When you can accept unconditionally and love this person regardless of the circumstances, his deepest level of awareness is awakened. There is a conflict between his spirit consciousness that knows the truth of who he is, and the limited earthly brain consciousness that believes he is capable of murder. The situation is resolved by the use of the animal emotion taken on by people. His reaction to absolutely unconditional love is ‘phear’, which is different from the temporary survival emotion taken from the four-legged animals. Humans have added tremendous complications and made fear into this new phenomenon phear. They are afraid of imagined situations, anticipated future events, reoccurrences, anything unexplained,, and are terrified by the purity of true unconditional acceptance. Whatever is pheared the most, manifests, such as a deadly snake. If he has no self-worth and feels he is no one, that his existence doesn’t matter to anyone, he won’t see anything. Some hunters see snakes or wild boars, and still many have reported that we simply vanished.

“Illusion is in the eye of the beholder. Protection comes from never choosing to believe you need any.”

Near the end of the book, there is a list of ‘thou shalt’ laws ‘”which have been around even longer than the ‘thou shalt not’ laws. If the thou shalt laws had been followed, there would not have been any reason for the second set.”

Read the rest of the post at Casa Zaza.

5 responses to “Notes from Mutant Message from Forever”