The Progress of Man 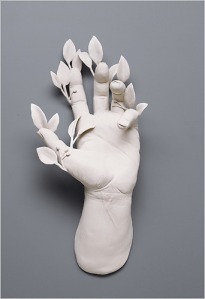 Art by Kate MacDowell; photo by Dan Kvitka for NYTimes

How much longer can we tolerate soulless progress?

“Then the coal company came, with the world’s largest shovel/And they tortured the timber and stripped all the land/Well they dug for their coal till the land was forsaken/Then they wrote it all down as the progress of man.”

John Prine was writing about his parents’ home in western Kentucky, not Niyamgiri Mountain in eastern India, but I couldn’t help but hear the echo of these four-decade-old lyrics as I thought about the struggle of the Dongria Kondh, around whom a global protest movement has grown to stop the digging of an open-pit bauxite mine in the middle of their land.

Maybe it seems odd to link Appalachia and tribal India, but I do so intentionally because it’s the same planet, the same phenomenon of progress, the same devastation of traditional life tied to place.  Prine’s song about Muhlenberg County and “Mr. Peabody’s coal train” is called “Paradise,” which is kind of like a cry that these hills are sacred, or once were. Loving a piece of Planet Earth, feeling loved by it in return: This is not sentimental or “primitive” but a deeply human way of being in the world that resonates at some level with every last one of us.

It’s time, I think, to resacralize progress. One way to start is to recognize the rights of native peoples around the world not to be displaced, to see in their determination to remain in reverent connection to a piece of the earth not something quaint and primitive and of value to them alone, but the heart and center of humanity’s struggle with itself.

“Our long-term goal is to change the place of tribal people in the public consciousness, so eventually it would become unacceptable to go into tribal regions and displace them,” Tess Thackara of Survival International USA told me. These are very intelligent societies. They should be part of our future.”

Let me repeat those last words: They should be part of our future — not as displaced persons, rootless, broken and “modernized,” but fully as themselves. Many Westerners, from astrophysicists to prosecuting attorneys, are beginning to grasp how much they have to learn from aboriginal cultures, whose connection with Planet Earth and the great rhythms of life — whose understanding of the healing process — has never been broken. They should be our teachers.

It is in this context that I look at the plight of the Dongria Kondh, who face displacement by a British company called Vedanta Resources, which wants to tear open their sacred mountain, located in the Indian state of Orissa, to extract bauxite ore for the aluminum refinery the company has already built at the foot of the mountain.

“The mine will destroy the forests on which the tribal Dongria Kondh people depend and wreck the lives of thousands of other Kondh tribal people living in the area,” Survival International, one of the organizations calling global attention to what is happening, says on its web site. While a portion of the profits generated by the mine would be used, as required by Indian law, to finance the tribe’s displacement, this cynical arrangement, often honored as sparingly as possible, hardly begins to compensate for “the destruction of a unique environment and culture.”

The momentum of industrialization is often indistinguishable from the momentum of war. Companies like Vedanta are used to getting their way, and getting away with whatever they can. Like the armies of Rome, they will, without compunction, make a wasteland and call it progress.

How much longer can we tolerate soulless progress? This is progress that is cold and profit-driven, that views the planet not as a living entity — our nurturer and, indeed, part of us — but rather as some great prize awarded to the most powerful, to be consumed, used up, abandoned.

The paradox, of course, is how well this has worked, at least for those on the winning side. By declaring ourselves independent of life itself, and therefore its master, we’ve built great throwaway civilizations beholden to their own perpetuation. But the resources of this planet are not inexhaustible. What we, the global community, need right now is not more bauxite but more connectedness.

“Is There an Ecological Unconscious?” So a long piece on “ecopsychology” by Daniel B. Smith in New York Times Magazine last month is titled. The article stakes a mainstream claim in the extraordinary possibility of a living, breathing, sentient Planet Earth, from which we, in fact, are not separate, physically, mentally or spiritually. If we sever our relationship to it, we cease being human.

Smith quotes environmentalist Gregory Bateson, writing about pollution in 1972 with sensitivity to the planet as living and aware, and intertwined with human consciousness: “. . . if Lake Erie is driven insane, its insanity is incorporated in the larger system of (our) thought and experience.”

How long can we continue to drive our planet insane with progress?