We owe the residents of the tiny island paradise called Vieques full compensation for the illnesses they are suffering courtesy of the U.S. Navy — and we owe them so much more than that.

We owe them a full accounting of what was done to their Manhattan-sized island, about 10 miles off the coast of Puerto Rico (the island is part of Puerto Rico and hence part of the United States) between 1941 and 2003, when it served as the Navy’s premiere weapons testing site. Bombs were dropped and guns were tested on the eastern portion of the island at least 200 days out of the year for 62 years; an estimated 80 million tons of ordnance pummeled the island’s fragile, tropical ecosystem over that time, contaminating soil, water and air, and bequeathing an array of serious health problems — cancer, birth defects, cirrhosis of the liver and much more — to the island’s 10,000 residents.

We owe them — how can I put this? — a commitment to sanity in the realm of national defense.  What kind of defense involves the commission of war crimes against our own citizens? We owe them a national conversation about who we are and what we’ve allowed to happen in the name of national security and global dominance.

Vieques, one of the most beautiful spots I’ve ever visited — its stunning features include what may be the world’s largest bioluminescent bay (microorganisms in the water glow when disturbed, as by swimmers) — was commandeered by the U.S. military as a throwaway site for weapons testing. The Navy occupied three-quarters of the island until 2003; it finally left following four years of protests, which were ignited when an errant bomb killed a civilian security guard in 1999.

The Navy left but, of course, it didn’t really leave. It left behind heavy metal contaminants (arsenic, lead, mercury, cadmium, aluminum); unexploded ordnance (18,700 live shells or bombs that the Navy itself has identified); barrels of unknown, likely toxic substances dumped into the ocean or stored on ships that were deliberately sunk; depleted uranium; Agent Orange; napalm; secrets, lies and a legacy of irresponsibility almost beyond comprehension.

But it’s irresponsibility in the name of national security. This implicates all of us. The story of Vieques demonstrates that there’s nothing peaceful about preparing for war.

This small, fragile island — sometimes called Isla Nena (Puerto Rico’s “little sister”) — along with its impoverished residents, were, like the Downwinders of Utah, Nevada and Idaho, whose health was compromised by nuclear testing, collateral damage of the Cold War and all the pretexts for perpetual war readiness that have succeeded it. Vieques is proof of the flawed vision of militarism, which uses up the world.

The Navy is in the process of cleaning up its mess, but this too is controversial and problematic. It has detonated about a third of the unexploded ordnance it has identified, thus continuing not only the nerve-wracking explosions but the spread of contaminants, a problem exacerbated by the island’s east-to-west prevailing winds, which carry the smoke to the populated portion of the island. In addition, the Navy has proposed to burn hundreds of acres of contaminated vegetation on its former bombing range in order to facilitate the detonation process. This proposal is vehemently opposed by the islanders, who fear the wholesale spread of pollutants in the process. 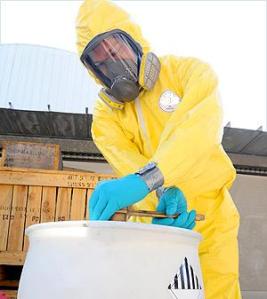 Meanwhile, the Navy continues to deny that the pollution left over from six decades of weapons testing, including secret experimentation with biological and chemical weapons, is a health hazard to the residents of Vieques. Ignoring inconvenient science is, of course, standard procedure for the military.

Nevertheless, “The pervasiveness of the contamination and the poverty of most of the population leaves Viequenses with no way to escape the poisonous substances,” according to AmericanValuesNetwork.org. “The toxins are all around them in the air they breathe, the water they drink, the soil where they grow crops, and the food they eat. . . . Children on Vieques are 25 percent more likely to die in infancy than those on the main island of Puerto Rico.” There are, the site explains, far higher rates of cancer and other illnesses among the residents, and the island lacks even a clinic, forcing residents to travel for hours by ferry (with unreliable service) and bus to get treatment.

The damage done to this beautiful island can never be fully undone, but perhaps a better future — for all of us — can blossom here. This is the vision of John Eaves, a lawyer whose firm represents, and has filed suits in U.S. District Court on behalf of, 8,500 residents. Though he titled a legal update he recently gave about the island “Paradise Lost,” he told me: “We see (the suits) as an opportunity for a global solution to Vieques.”

The redress the law suits are seeking, he said, include a hospital on the island, better transportation, windmills for economic development and a research center devoted to the study of environmental cleanup — indeed, to the development of a new science of environmental reclamation.

Military-industrial contamination is, of course, a worldwide problem: the nightmare legacy of modern war. How fitting if Vieques should become home to its solution.