It is worth revisiting Mr. al-Rabiah’s case as America debates whether lawyers who did pro-bono work for Gitmo detainees deserve praise or scorn. Liz Cheney, William Kristol, Marc Thiessen, and Andrew McCarthy are among the folks who argue the latter — all either helped air or defended a television advertisement calling the subset of these lawyers who now work in the Obama Justice Department “the al Qaeda seven.” In the New York Times, Mr. McCarthy wrote, “Only criminal defendants are entitled to counsel, and those who represent them do indeed perform a constitutionally valuable function. It has never been the law, however, that war prisoners are entitled to counsel to challenge their detention as enemy combatants.” He goes on to assert that “the lawyers chose to offer themselves, gratis, to our enemies for litigation the Constitution does not require. They did so knowing that this litigation would be harmful to the war effort.”

Orin Kerr, a law professor who blogs at The Volokh Conspiracy, has published a devastating take-down of Mr. McCarthy’s argument. It is worth reading in full. I’ll excerpt just one sentence: “McCarthy strangely overlooks the basic fact that much of the litigation for the Guantanamo detainees concerns whether they are in fact the enemy.” Even as an abstract argument, Professor Kerr’s point is persuasive, as are all parts of his rebuttal. But the wrongheadedness of the Cheney/Kristol/Thiessen/McCarthy view can be fully appreciated only by looking at how it played out in a particular case.

Thus Mr. al-Rabiah. It isn’t just that he was an innocent man thrown into Gitmo, or that he was held even after a CIA analyst concluded that he was innocent, or that National Security Council Staffers were aware of his innocence and actively trying to bring about a review of his detention — Mr. al-Rabiah’s case is apt because after the CIA’s 2002 determination of his innocence, he spent another seven years wrongly imprisoned, regaining his freedom and seeing his children only after retaining the help of American attorneys.

It is because of people like Ms. Cheney, Mr. Kristol, Mr. Thiessen and Mr. McCarthy — and very particularly because of David Addington and Dick Cheney — that innocent Mr. al-Rabiah lost eight years of freedom when he should have been released much sooner. It would be one thing if these folks were regretful about the imprisonment of innocents, apologetically explaining them away as an inevitable consequence of the fog of war. But they never express regret, even about particular past cases that we’re better able to judge now that the fog has cleared. Nor is the absence of regret a sign that they are ambivalent about releasing wrongly imprisoned innocents. In maligning Gitmo lawyers, they actively attack all the attorneys who successfully proved that detainees were wrongly held!

You’d think that Ms. Cheney, Mr. Kristol, Mr. Thiessen and Mr. McCarthy would advocate for improved detainee review policies to ensure that the mistakes of the past aren’t repeated — after all, they know innocent folks were held in Gitmo for years on end. Given the benefit of hindsight, however, they’d repeat the Bush Administration’s policies on enemy combatants. In other words, if we rewound to September 12, 2001, they’d knowingly favor an approach that would get Mr. al-Rabiah and others like him wrongly detained all over again, and if they’d change anything at all, it’d be taking away their access to lawyers. 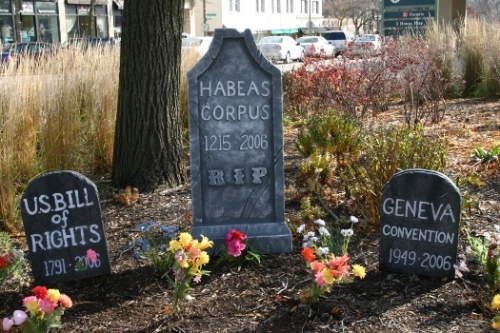 Imagine traveling abroad to do aid work of the kind often done by church groups. Say you are in Haiti, or Chile, or Ghana, or even Mexico. A terrorist attack occurs in the country you are visiting. In the chaos that follows, you are arrested, and your hosts inform you that you’ll be held without charges until officials can determine whether or not you’re a terrorist.  You’re utterly unfamiliar with the legal system of Haiti, Chile, Ghana and Mexico — it only seems fair that as you try to prove your innocence, you’re afforded access to someone who understands the system that will grant or deny your freedom.

But Ms. Cheney, Mr. Kristol, Mr. Thiessen and Mr. McCarthy take a different view. Their position is that lawyers shouldn’t be provided to someone in that situation — in fact, they don’t believe that there should be any due process at all. If the President says someone is a terrorist, he is a terrorist. Any attorney who tries to prove otherwise is aiding and abetting the enemy. It’s a system that any dictator would approve as adequate to his needs, and that every democracy in the world rejects.

Mr. al-Rabiah was thought to be innocent after a year. He sat in a cage in Cuba for eight years. Did giving him a lawyer hurt the War on Terror? Did his release make Americans less safe. It is absurd to say so. Ms. Cheney, Mr. Kristol, Mr. Thiessen and Mr. McCarthy have no answer to someone like Mr. al-Rabiah, and so they pretend that people like him do not exist.