The Feedback Loop No One Thought of: The Katla Volcano 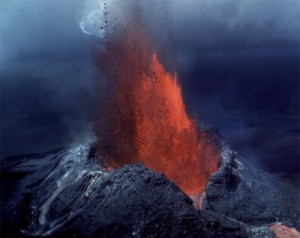 It's Not Nice To Fool Mother Nature

For the past several weeks, I have wondered about the impact on the tectonic plates of the melted glacier water rushing from the poles towards the equator.  I looked at the relative depth of the water versus the depth of the lithosphere and concluded that we really had nothing significant to worry about regarding plate tectonics and global warming.

Not quite.  As usual, I spoke too soon.

The isostatic rebound caused when a huge chunk of ice is removed from its usual location to a location distributed across the entire surface of an ocean portends a seismically active world, according to Dr. Patrick Wu at the University of Calgary.  A cubic meter of ice weighs right around 2,000 pounds; multiply that weight by several hundred to a thousand meters and, voilà, one has a highly effective damper on the movement of the tectonic plates near the Earth’s polar regions.  Or any region where a glacier is present.

But as the centralized weight of glaciers gets redistributed, the tectonic plates in the polar regions will begin to slip and move, triggering all manner of seismic activity.  In the case of erupting volcanoes, those melted glaciers caused by global warming will trigger a negative feedback loop, countering global warming with some global cooling.    Volcanic ash thrown high into the stratosphere will block the Sun’s warmth from ever reaching the Earth’s surface, sending global temperatures plummeting.

All of this information has hit the US State Department with the force of a revelation.  The recent eruption of Iceland’s Eyjafjallajokull  volcano, while picturesque and interesting, is actually quite ominous.  And that is because an Eyjafjallajokull eruption can trigger an eruption of its far more ominous neighbor, Katla.  The last time Katla erupted, it followed an eruption of the Eyjafjallajokull volcano causing a mini “ice age” to descend on the Earth’s surface, circa 1780 or so.  When I suggest a dramatic temperature drop, I am suggesting that the Mississippi River could freeze just north of New Orleans.  If you thought this last Winter was cold, you have no idea what our Mother has in store for us and our carbon spewing lifestyles.

The mechanism behind Katla’s last eruption appears to be related to glacial melting as well.  When Eyjafjallajokull erupted in the mid 1780’s, it melted the glacier covering Katla’s volcanic crater.  With the weight of the glacier lifted, Katla erupted spewing poison gas all over Scotland and Ireland, killing hundreds (today, it could be thousands), and triggering the global cooling just mentioned.

Obviously we may be in store for even more dramatic and unexpected effects caused by our offensive lifestyles.  An argument could even be made that our holocaust in the US of some twenty million native Americans, along with the rejection of their culture, has resulted in the environmental collapse we are only now becoming aware of.  While I am certain Dennis Banks or Leonard Peltier would not be surprised by these thoughts, many Americans would be.

It is an education that needs to take place.

12 responses to “The Feedback Loop No One Thought of: The Katla Volcano”