‘Dehumanization, part of US training’ 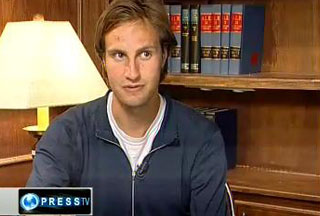 A former US Army specialist, who was part of the same unit that killed Iraqi civilians from a helicopter in 2007, says dehumanization is part of basic US army training.

In an interview with Press TV, Josh Steiber explained the three years he spent in the US Army before he asked to be released as a conscientious objector.

Steiber said “the dehumanizing of people from other countries” was the main reason that he quit the Army.

“As far back as basic training, we were singing songs as we were marching around, joking about killing women and children,” he told the Press TV correspondent in Washington.

The whistle-blower website, WikiLeaks, released a shocking video earlier this month showing US soldiers in an Apache helicopter killing dozens of Iraqi civilians, including two Reuters employees, in cold blood.

Steiber noted that he sang the following song together with other members of his unit:

Steiber pointed out that he did not personally know the pilot in the video because they were attached to his unit only on that one fateful day.

However, the former US Army specialist was not surprised by what was on the tape.

“You’re focused on the physical aspect, but all along there is a psychological aspect.”

“I think it would be wrong to put all [the blame] on the individual soldier. I think it’s very telling that the secretary of defense, [Robert Gates], came out over the weekend and said there is no wrongdoing in the video.”

“And so if you’re only adjusting a few soldiers when the secretary of defense is putting his stamp of approval on this, then the system is not gonna change.”

Steiber concluded that there are other soldiers and veterans who are as disillusioned and war-weary as he is.

2 responses to “‘Dehumanization, part of US training’”