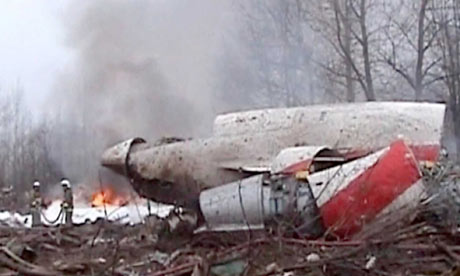 By Brandon Dean
War on You

Rumors fly as video shows apparent plane crash survivors–including one who appears to get shot–directly after what sound exactly like gunshots.

I can’t speak for anyone but myself, but when a single plane crashes, killing the entire top echelon of any government, I hear air raid sirens going off in my head.  When the wiped out government happens to represent a nation about to take on the biggest business deal in its history–and the now-dead president was going to axe that deal–I do not have to be told things are not as they appear to be, at least if you watch the zionist U.S. media.

In case you’ve lost your remote control or your internet connection in the last couple weeks, and just now got back online, a 96-member delegation of the Polish government was wiped out in what the Russians are telling us is an “accident.”

Some of the members of the Polish government and military who died in a plane crash outside of Smolensk, Russia, on April 10th, 2010:

A video was taken by a Smolensk, Russia, local named Andrij Mendierej, in which gun shots can be heard, after what appear to be cries for mercy. Here is an edited version of Mendierej’s video, in which the apparent survivors are pointed out.  Also pointed out are three figures walking towards the crash site moments before the gun shots.  Toward the end of the clip, the dark shape of a man jumps from the wreckage of the plane and runs, only to stumble directly after the gunshots:

Internet blogs and forums all over the world have been reporting that Mendierej was murdered on April 15th.  A user comment on a Polish news site is the source of what may or may not be a rumor.  At this point, whether Mendierej’s murder is a rumor or not is up in the air.  His original video is no longer on Youtube.com, where it first appeared.  The above video was re-uploaded to Youtube by another user.

Here is a stabilized version of Mendierej’s video:

Money tends to drive politics.  Polish President Lech Kaczinski’s government was not playing ball with the European Union.  Poland has been procrastinating (as far as the EU is concerned, anyway) with its transfer from its national zloty currency to the euro.

Closer to the target–as far as money is concerned: President Lech Kaczinski was staunchly anti-Russian politically, and was going to deny Russia what would have been (and now is going to be thanks to the Prime Minister Donald Tusk) the biggest business deal in Polish history: a $100 billion dollar gas deal with Russia’s nationalized company Gazprom (source).  This deal is now about to go down in spite of Kaczynski. The following is a paragraph from the above source:

“The contract to buy gas from Gazprom until 2037 will make Poland 100% dependent on Russian gas for the next 28 years in spite of the announcement of the discovery of huge gas reserves in Poland in April just before the memorial service in Katyn, Smolensk.”

As luck would have it, a few internet searches can sometimes turn up interesting things.  One of the things that jumped out to me personally was a timesonline.co.uk article from April 5th (five days before the crash), which claims that the gas reserves under Poland would have made her “self-sufficient for the foreseeable future.”  Kaczynski was for exploiting these reserves, and axing the deal with Gazprom and the Russians. From the Times Online article:

“American technology to produce shale gas is unleashing a scramble for drilling rights in Poland, where experts believe vast reserves of unconventional gas exist that could help to weaken Russia’s grip on Europe’s energy supplies.”

So, to recap: five days before the entire top echelon of Poland’s government dies in a suspicious plane crash, the world finds out that Poland has vast deposits of previously unreachable gas shale, which would have made importing 70 percent of its gas from Russia obsolete and Poland itself economically self-sustaining.  Then we find out that Kaczynski was about to deny the biggest business deal in Polish history to the national gas company of Russia.  Are we starting to see a motive here?

I believe Kaczynski saw not only Poland’s independence from the European Union (and the euro itself)–and not only freedom from dependence on Russian gas–in these reserves of natural gas, but personal fortune and power.  Upstart nations who wish for financial independence and their leaders have always been targets of the international zionist/Jewish banksters, as Germany discovered in 1933.

To make matters worse for Russia, a Polish MP has claimed that the Russian government orchestrated the plane crash.  Not only that, but Polish Catholic Bishop Mieczyslaw Cieslar was killed in what is being called a car accident on his way home from Kaczynski’s funeral.  Did he miss the flight to Katyn or something?

People all over the world are suspicious of the crash, and of the gunshots at the crash site recorded by Mendierej.  Not to mention the apparent shooting of one of the passengers, or the fact that there does not appear to be any bodies  of victims (besides the two apparently live victims, one of whom being the one who appears to get shot) in Mendierej’s video footage from moments after the crash..

There is something extremely rotten in Smolensk, Russia.  As news unfolds, I will update this site accordingly.  I am particularly interested in knowing if the story of Andrij Mendierej’s murder is just a rumor, or actually happened.  The motive for killing him is there: if he witnessed or recorded people being shot (as it certainly appears he did), those shooters may just fear him testifying against them-in court or in the press.  If it is just a rumor, I’m interested in the source of the rumor: was it just a sick joke by a spiteful person, or was the information covered up?  Or was a rumor spread to make the investigation into the “accident” look silly?  That would make sense if it is a rumor, given that everyone it seems in the alternative press (including me) jumped on it right away.  I saw the source was a Polish website, but did not realize it was a comment by a user, as opposed to a story by the main site, and i believe many others made the same assumption originally.  More has been unfolding every day, so we’ll just have to wait this one out a little.

The fact that there are no mainstream news sources on this story may tell others it is just a rumor, but I feel the need to point out that there is no mainstream coverage of Mendierej’s video at all.  It very well may be a rumor, but I’ll reserve judgment until all the cards are in.  I’d personally like to see another video from him.  That should satisfy everyone on whether he’s still alive or not.

I personally couldn’t be more suspicious of the official story of this supposed accident.  I also wish to point out that we still most likely do not know all there is to be known about this.  The truth has a tendency of outing itself however, sometimes with the help of a few good bloggers.

Brandon Dean is a contributor to War On You. He can be reached through his website http://www.WizardofOswald.com copyright Brandon Dean, 2009