The Cover-up: BP’s Crude Politics and the Looming Environmental Mega-Disaster

“Submersibles that are  monitoring the escaping oil from the Gulf seabed are viewing television pictures of what is a ‘volcanic-like’ eruption of oil…. If the ocean oil geyser is not stopped within 90 days, there will be irreversible damage to the marine eco-systems of the Gulf of Mexico, north Atlantic Ocean, and beyond.”

WMR has been informed by sources in the US Army Corps of Engineers, Federal Emergency Management Agency (FEMA), and Florida Department of Environmental Protection that the Obama White House and British Petroleum (BP), which pumped $71,000 into Barack Obama’s 2008 presidential campaign — more than John McCain or Hillary Clinton, are covering up the magnitude of the volcanic-level oil disaster in the Gulf of Mexico and working together to limit BP’s liability for damage caused by what can be called a “mega-disaster.”

Obama and his senior White House staff, as well as Interior Secretary Ken Salazar, are working with BP’s chief executive officer Tony Hayward on legislation that would raise the cap on liability for damage claims from those affected by the oil disaster from $75 million to $10 billion. However, WMR’s federal and Gulf state sources are reporting the disaster has the real potential cost of at least $1 trillion. Critics of the deal being worked out between Obama and Hayward point out that $10 billion is a mere drop in the bucket for a trillion dollar disaster but also note that BP, if its assets were nationalized, could fetch almost a trillion dollars for compensation purposes. There is talk in some government circles, including FEMA, of the need to nationalize BP in order to compensate those who will ultimately be affected by the worst oil disaster in the history of the world.

Plans by BP to sink a 4-story containment dome over the oil gushing from a gaping chasm one kilometer below the surface of the Gulf, where the oil rig Deepwater Horizon exploded and killed 11 workers on April 20, and reports that one of the leaks has been contained is pure public relations disinformation designed to avoid panic and demands for greater action by the Obama administration, according to FEMA and Corps of Engineers sources. Sources within these agencies say the White House has been resisting releasing any “damaging information” about the oil disaster. They add that if the ocean oil geyser is not stopped within 90 days, there will be irreversible damage to the marine eco-systems of the Gulf of Mexico, north Atlantic Ocean, and beyond. At best, some Corps of Engineers experts say it could take two years to cement the chasm on the floor of the Gulf.

Only after the magnitude of the disaster became evident did Obama order Homeland Security Secretary Janet Napolitano to declare the oil disaster a “national security issue.” Although the Coast Guard and FEMA are part of her department, Napolitano’s actual reasoning for invoking national security was to block media coverage of the immensity of the disaster that is unfolding for the Gulf of Mexico and Atlantic Ocean and their coastlines.

From the Corps of Engineers, FEMA, the Environmental Protection Agency, Coast Guard, and Gulf state environmental protection agencies, the message is the same: “we’ve never dealt with anything like this before.”

The Obama administration also conspired with BP to fudge the extent of the oil leak, according to our federal and state sources. After the oil rig exploded and sank, the government stated that 42,000 gallons per day was gushing from the seabed chasm.  Five days later, the federal government upped the leakage to 210,000 gallons a day.

However, WMR has been informed that submersibles that are  monitoring the escaping oil from the Gulf seabed are viewing television pictures of what is a “volcanic-like” eruption of oil. Moreover, when the Army Corps of Engineers first attempted to obtain NASA imagery of the Gulf oil slick — which is larger than that being reported by the media — it was turned down. However, National Geographic managed to obtain the satellite imagery shots of the extent of the disaster and posted them on their web site. 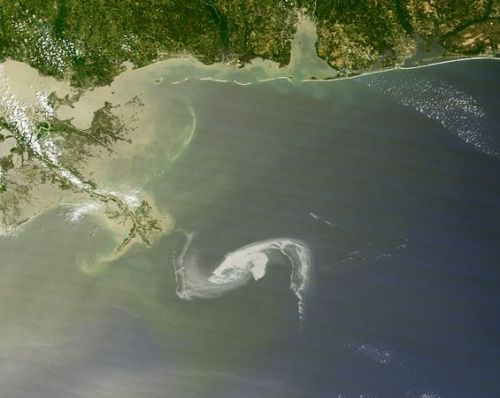 Gulf oil spill satellite picture by NASA April 29, at NatGeo. At 216,000 gallons a day, over 4.5 million gallons have polluted the Gulf since April 20th.

There is other satellite imagery being withheld by the Obama administration that shows what lies under the gaping chasm spewing oil at an ever-alarming rate is a cavern estimated to be around the size of Mount Everest. This information has been given an almost national security-level classification to keep it from the public, according to our sources.

The Corps and Engineers and FEMA are quietly critical of the lack of support for quick action after the oil disaster by the Obama White House and the US Coast Guard. Only recently, has the Coast Guard understood the magnitude of the disaster, dispatching nearly 70 vessels to the affected area. WMR has also learned that inspections of off-shore rigs’ shut-off valves by the Minerals Management Service during the Bush administration were merely rubber-stamp operations, resulting from criminal collusion between Halliburton and the Interior Department’s service, and that the potential for similar disasters exists with the other 30,000 off-shore rigs that use the same shut-off valves.

The impact of the disaster became known to the Corps of Engineers and FEMA even before the White House began to take the magnitude of the impending catastrophe seriously. The first casualty of the disaster is the seafood industy, with not just fishermen, oystermen, crabbers, and shrimpers losing their jobs, but all those involved in the restaurant industry, from truckers to waitresses, facing lay-offs.

The invasion of crude oil into estuaries like the oyster-rich Apalachicola Bay in Florida spell disaster for the seafood industry. However, the biggest threat is to Florida’s Everglades, which federal and state experts fear will be turned into a “dead zone” if the oil continues to gush forth from the Gulf chasm. There are also expectations that the oil slick will be caught up in the Gulf stream off the eastern seaboard of the United States, fouling beaches and estuaries like the Chesapeake Bay, and ultimately target the rich fishing grounds of the Grand Banks off Newfoundland. 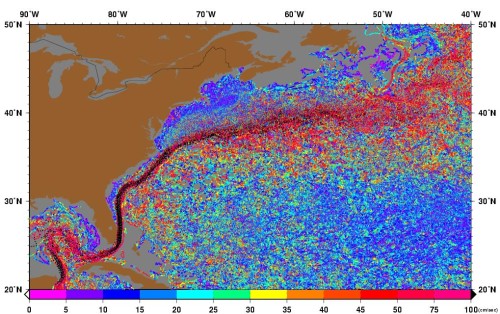 WMR has also learned that 36 urban areas on the Gulf of Mexico are expecting to be confronted with a major disaster from the oil volcano in the next few days. Although protective water surface boons are being laid to protect such sensitive areas as Alabama’s Dauphin Island, the mouth of the Mississippi River, and Florida’s Apalachicola Bay, Florida, there is only 16 miles of boons available for the protection of 2,276 miles of tidal shoreline in the state of Florida.

Emergency preparations in dealing with the expanding oil menace are now being made for cities and towns from Corpus Christi, Texas, to Houston, New Orleans, Gulfport, Mobile, Pensacola, Tampa-St.Petersburg-Clearwater, Sarasota-Bradenton, Naples, and Key West. Some 36 FEMA-funded contracts between cities, towns, and counties and emergency workers are due to be invoked within days, if not hours, according to WMR’s FEMA sources.

There are plans to evacuate people with respiratory problems, especially those among the retired senior population along the west coast of Florida, before officials begin burning surface oil as it begins to near the coastline.

There is another major threat looming for inland towns and cities. With hurricane season in effect, there is a potential for ocean oil to be picked up by hurricane-driven rains and dropped into fresh water lakes and rivers, far from the ocean, thus adding to the pollution of water supplies and eco-systems.

Over 3,800 oil platforms in the Gulf of Mexico

18 responses to “‘Volcanic-like’ eruption of oil in Gulf: Wayne Madsen Cover Up report”