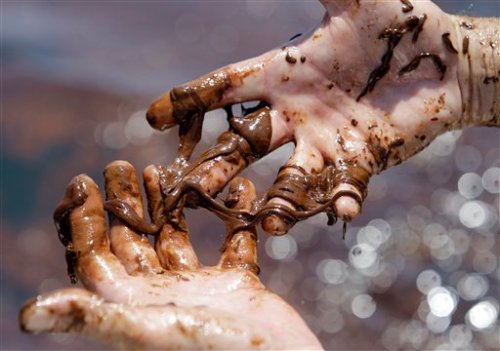 The latest chapter in the media’s ongoing struggle to cover the Gulf Oil Spill comes courtesy of PBS Newshour’s Bridget Desimone, who has been working with her colleague, Betty Ann Bowser, in “reporting the health impact of the oil spill in Plaquemines Parish.” Desimone reports that on the ground, officials are generally doing a better job answering inquiries and granting access to the clean-up efforts.But Desimone and Bowser have encountered one “roadblock” that they’ve struggled to overcome: access to a “federal mobile medical unit” in Venice, Louisiana: “The glorified double-wide trailer sits on a spit of newly graveled land known to some as the “BP compound.” Ringed with barbed wire-topped chain link fencing, it’s tightly restricted by police and private security guards.”

Ever hear of an American medical treatment facility masquerading as Stalag 17 before (I mean other than the one in the movie “Shutter Island“)? Of course, in Shutter Island the facility was an asylum for the criminally insane. I don’t think that’s the excuse the Feds and BP can use for the Venice, La. facility unless the toxic chemicals to which the workers have been exposed have turned them into raving zombies or serial killers. So, what gives? Bridgett and Betty would like to know why they can;t get a look see inside this medical facility staffed bv “a medical team from the HHS National Disaster Medical System — a doctor, two nurses, two emergency medical technician paramedics (EMT-P) and a pharmacist.” But someone in our government doesn’t want them poking around asking all those standard journalmalistic questions that journalists ask when the mood strikes them (i.e., when they aren’t covering important politicians to whom they want to preserve their access):

For over two weeks, my NewsHour colleagues and I reached out to media contacts at HHS, the U.S. Coast Guard and everyone listed as a possible media contact for BP, in an attempt to visit the unit and get a general sense of how many people were being treated there , who they were and what illnesses they had. We got nowhere. It was either “access denied,” or no response at all. It was something that none of us had ever encountered while covering a disaster. We’re usually at some point provided access to the health services being offered by the federal government.

You know, this is the kind of thing, not that I’m suggesting this is true, but …this is the kind of thing that makes people wonder if BP or the government have something to hide. Something they don’t want the people they are employing to work on these clean-up efforts or anyone else to know. Like the fact that maybe the oil spill and the chemicals used in cleaning it up just might have deleterious effects on human health for people, workers or not, in the region, and that a number of medical experts have been calling for public health monitoring of the health risks to which these people are being exposed on a daily basis:

Charged with advising decision-makers and the general public on health issues related to the spill, the Institute of Medicine corralled public officials, medical experts and academic researchers from the Gulf Coast region and across the country this week to discuss what is known about the potential health impacts of the spill and what information is needed to improve treatment and public education.Their observations during two days of meetings seemed to converge on two key conclusions: Data gathered from previous oil spills is grossly inadequate in depth and chronological scope; and a massive, multilateral effort will be required to effectively treat, research and monitor affected populations along the Gulf Coast this time around.

“The science definitely needs to get better at getting the answers,” said Louisiana state health officer Jimmy Guidry. “People don’t want to be seen as guinea pigs,” he warned.

Let me fix that last bolded quote. It should have read “People don’t want to be guinea pigs ever” for the toxic effects of human caused ecological disasters. Of course, BP has a vested interest in no one studying the health risks that resulted from its gross negligence and reckless indifference for the safety of its workers and the people of the Gulf Coast. I can understand that. BP may be a person with constitutionally protected rights, but it sure isn’t an individual human being capable of feeling empathy, shame or guilt. For them the health concern of Gulf area residents citizens is merely a potential liability on their balance sheet, one they’d just as soon ignore and avoid if at all possible.

One of the first things BP did after oil started gushing into the Gulf was to spray more than 1.1 million gallons of a dispersant with the optimistic name “Corexit” onto the oil. Then BP hired Louisiana fishermen and others to help with cleanup and containment operations. About two weeks later, over seventy workers fell sick, complaining of irritated throats, coughing, shortness of breath and nausea. Seven workers were hospitalized on May 26. Workers were engaged in a variety of different tasks in different places when they got sick: breaking up oil sheen, doing offshore work, burning oil and deploying boom. BP officials speculated that their illnesses were due to food poisoning or other, unrelated reasons, but others pointed out how unlikely these other causes were, since the sick workers were assigned to different locations. […]The illnesses they have experienced have led workers to ask for better equipment to use for cleanup, including respirators, but BP says air quality monitoring doesn’t show a need for breathing equipment, according to OSHA standards. Congressman Jerry Nadler (D-New York) says BP is refusing to acknowledge any liability for health problems, and that the only thing chemical dispersants have accomplished is to make some of the oil less visible on the ocean’s surface by driving it into underwater plumes, which BP denies exist. He likened the spraying of Corexit on the ocean to the U.S.’s spraying of Agent Orange in Vietnam, a defoliant that by some accounts resulted in as many as 400,000 deaths and disabilities, and 500,000 children born with birth defects. Nadler expressed concern that the situation with BP and Corexit reminds him of the World Trade Center where the government said the air was safe for workers and told them there was no need for concern and no need for respirators, and thousands fell ill with chronic health problems.

BP is a soulless, heartless corporate person whose sole objective is making money, i.e., profits. So their attitude toward the people their activities are making sick is, if not morally or legally acceptable, at least understandable. What I can’t understand, however, is why these PBS reporters are being given the runaround by the Government, which is managed by the individual human beings we duly elected to protect and serve the general welfare of “We, the people.”

When Desimone finally got to speak with Ron Burger, the “Medical Unit Operations Chief for HHS’s National Disaster Medical System,” she was told that the facility had been treating responders and could not or would not confirm or deny that any area residents had been treated there or turned away. […]Burger also told Desimone that the facility was being run under the auspices of the “national contingency plan.” I’ll remind you for the eleventy billionth time that National Incident Commander Thad Allen specifically directed officials on the ground to grant access to the media, in what appears to be the most widely unheard or ignored set of orders in the world.

Dear Mr. President, since your employees can’t seem to get the message that transparency is the order of the day, maybe you should take a direct hand in seeing that journalists and reporters are given the access to these clean-up sites, including the medical facility in Venice, La., that for some reason they keep being told is off limits to their eyes and ears and cameras.

And the sooner the better.

One response to “Is BP Hiding Seriously Ill Clean-Up Workers?”