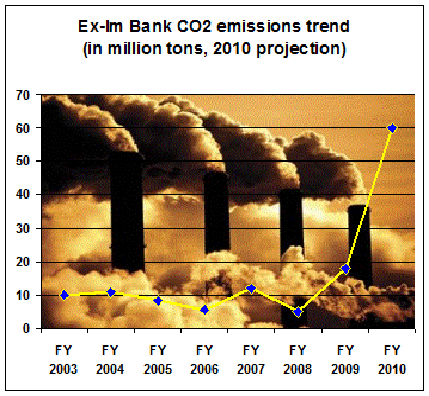 FOR IMMEDIATE RELEASE
By Pacific Environment, Friends of the Earth, Oil Change International and Groundwork

On July 15, the U.S. Export-Import Bank (Ex-Im Bank) board is scheduled to reconsider an application to provide hundreds of millions of dollars in financing to India’s Reliance Power Ltd. for the 4,000 megawatt coal power and mine project. Three weeks ago, the board appropriately rejected financing for Sasan based on its massive carbon dioxide emissions. The project would generate some 26 million annual tons of CO2, more than the bank’s annual emissions for all fossil fuel projects approved by Ex-Im Bank in 2009.[1]

“Clean energy provides more jobs and does more to advance American competitiveness and security than fossil fuels,” said Friends of the Earth President Erich Pica, noting a recent study showing that investing in clean tech exports generates twice as many jobs as a comparable investment in the oil, gas or coal sectors.[2] “Scarce public resources should ensure that the U.S. leads the world in transitioning to a new clean economy, not prop up dirty and dangerous fossil fuels.”

Ex-Im’s new carbon policy allows the Ex-Im Bank board to decline a transaction due to its detrimental effects. But after intense lobbying from Bucyrus, a Wisconsin-based coal mining equipment company, Ex-Im Bank backtracked on the Sasan decision by allowing Reliance Power to submit a new application, which reportedly will include an additional solar energy component but will not lower the pollution of the coal plant.

“It appears as though Ex-Im Bank went to the Enron school of energy accounting,” said Doug Norlen, Policy Director of Pacific Environment. “Adding a solar energy project does nothing to reduce greenhouse gas emissions from Sasan. This is just business as usual, which is to support dirty energy projects at the expense of green jobs. Ex-Im Bank should reject the Sasan project and instead use its money to support America’s clean energy jobs to support renewable energy exports around the world.”

“The White House’s swing state politics forced the Ex-Im Bank to botch the agency’s first major test of its new carbon policy,” said Steve Kretzmann, Executive Director of Oil Change International. “It also puts the agency at odds with the Administration’s other climate efforts, including a G20 commitment to phase out fossil fuel subsidies and a recent decision to not support the massive Medupi coal project in South Africa with World Bank funding.”

Environmentalists also worry that the reversal of the Sasan decision would set a dangerous precedent for other coal projects in the Ex-Im Bank pipeline, including the 4,800 megawatt Kusile coal power project in South Africa, which would emit 30.5 million tons of carbon dioxide annually. Over 95% of Ex-Im’s energy portfolio is already based on fossil fuels,[3] and a series of politically-motivated decisions to fund high-carbon projects would put Ex-Im even further out of step with the Administration’s pledges to promote clean energy jobs and tackle climate change.

“Ex-Im Bank’s consideration of the provision of U.S. taxpayers financing for further fossil fuel projects in South Africa, while the World Bank Inspection Panel is considering a formal investigation into the $3.75 billion loan for the Medupi project, shows how unwilling the Obama administration is towards committing to real change,” said Sunita Dubey of Groundwork, a climate justice network based in South Africa.

If approved, the two projects combined would total 56.5 millions annual tones of greenhouse gas emissions more than tripling the volume of emissions supported by Ex-Im Bank in 2009, which was a record year in it self for emissions.

[1] In 2009, the direct carbon dioxide emissions associated with Ex-Im Bank projects amounted to 17.9 million tons, which itself represented a record year of emissions.

[2] For every million dollars invested, 13.5 jobs are created in the clean tech export sector, versus just 3.7 jobs or 4.9 jobs in the oil and gas and the coal industry, respectively. See: Getting Back in the Game: U.S. Job Growth Potential From Expanding Clean Technology Markets in Developing Countries, WWF, 2010, available at http://www.worldwildlife.org/climate/Publications/WWFBinaryitem16090.pdf