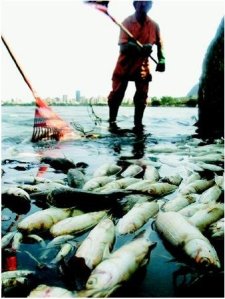 “The National Oceanic and Atmospheric Administration says a test for dispersants is in the works. Until then, officials are going by the ‘current science’ that dispersants have low potential for harm,” reports ProPublica.

Orwellian Newspeak aside, Corexit is four times more toxic than oil. On May 3rd, the environmental group, Protect the Oceans, reported that “oil is toxic at 11 ppm (parts per million), Corexit 9500 at only 2.61 ppm.” Bear in mind that both are going into the Gulf, and into the food chain.

The EPA designated one of the dispersants, Corexit 9527, a “chronic and acute health hazard” reports the New York Times. Mike Adams of Natural News had this to say:

“On the toxicity question, you could hardly find a more dangerous combination of poisons to dump into the Gulf of Mexico than what has been revealed in Corexit. The Corexit 9527 product … is made with 2-butoxyethanol, a highly toxic chemical that has long been linked to the health problems of cleanup crews who worked on the Exxon Valdez spill.

“A newer Corexit recipe dubbed the ‘9500 formula’ contains dioctyl sodium sulfosuccinate, a detergent chemical that’s also found in laxatives. What do you suppose happens to the marine ecosystem when fish and sea turtles ingest this chemical through their gills and skin? And just as importantly, what do you think happens to the human beings who are working around this chemical, breathing in its fumes and touching it with their skin?”

But the FDA denies the scientific notion of “biomagnification” — the tendency of certain chemicals to become concentrated as they move into and up the food chain, like from plankton to shrimp to human. Instead, the FDA asserts “there’s a difference between what [the dispersant] does to a living fish and any harm that it might have for a human consuming a fish that was in or near water with dispersant in it.”

When we learn that:

* BP had a prior explosion in February at this site;

* BP ignored the EPA stop-use order of these toxic dispersants;

* BP refused to provide respirators and threatened to fire workers who used their own respirators on the job;

* BP and the US government shut down the media, arresting journalists for photographing the evidence and denying flights over the area; and that

* British Petroleum is using a product in the Gulf of Mexico that has been banned in Britain for over ten years,

Then, it becomes more plausible that something else is going on. Are they trying to kill the ocean?  Us?  The following video presents these questions, pointing the finger at the private, foreign, international monetary/banking cartel. [Note that this video was uploaded on May 29, so some of the figures given are much less than today’s known figures (e.g. from half a million gallons to 1.8 million gallons of dispersant).]

Whatever the motivations behind the actions and inactions of responsible parties, whatever their plan or endgame, we are best served by choosing food that is known to be safe.

9 responses to “Gulf Seafood Not Tested for Toxic Dispersants”