Implications of a Pointless War 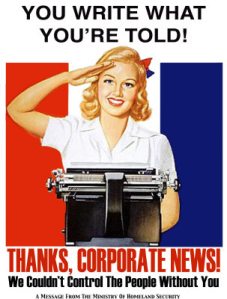 What does it mean that the New York Times, upon the occasion of President Obama’s announced drawdown of forces in Iraq last week, called our seven and a half years of invasion and occupation of the country “a pointless war”?

The editorial proceeded to do what Obama himself seemed to be under enormous political pressure to avoid: It skewered his predecessor, mildly perhaps, but repeatedly throughout the 645-word editorial: “the war made America less safe,” “it is important not to forget how much damage Mr. Bush caused by misleading Americans,” etc. The editorial even acknowledged an Iraqi death toll: “at least 100,000.”

Why am I underwhelmed — disturbed, even — by this evidence of mainstream disavowal of the disastrous war that had such overwhelming support at its bloody, shock-and-awe onset?

While Obama said it was time to “turn the page” on Iraq, the Times and the constituency it represents apparently feel compelled to wad it up as well and toss it into the dustbin of history. And thus, even though 50,000 U.S. troops, a.k.a., “advisers,” remain in the shattered country and our commitment there, let alone our responsibility, is far from over, the Iraq war has officially become a consensus mistake, right alongside Vietnam.

Considering that I agree with the editorial, I marvel at how agitated it makes me. Maybe what troubles me is the unappreciated enormity of the phrase “pointless war” and the easy, consequence-free blame for it assigned to George Bush and his inner circle. Between the lines, I feel the rush to move on, to learn nothing, to throw berms around the insidious spread of responsibility (my God, what if it reaches us?). Better to cut our losses than to cut the Defense budget.

But this was $3 trillion worth of pointless war, which left in its wake a wrecked and polluted country with millions of displaced people, soaring cancer and birth defect rates, “at least” 100,000 dead Iraqis and by some measures more than a million. If we’re actually at the point of acknowledging that the war was a “mistake,” that all this carnage, all this wasted blood and treasure, were “pointless,” isn’t an accounting of some sort required — a pause in governmental operations, a national soul-searching, an inquiry? How in God’s name does the largest military machine in human history get mobilized into a pointless war?

And beyond that, where does our atonement lie? If we have just waged a war of pointless aggression and in the process killed between 100,000 and a million people, who are we? Are we capable of doing it again? Somehow, laying the whole blame on one lying president, who managed to deceive an entire industry of investigative journalists and an innocent, trusting public, doesn’t wash.

Indeed, if that’s the explanation, I would call it criminal naïveté on the part of every facet of American society, beginning with the media, that let itself be suckered into supporting, and continuing to support, a pointless war. And I don’t see anything much changing, despite our dishonorable drawdown in Iraq. We still have implicit faith in the military as the protectors of our safety and look toward the next war being shopped around and focus-grouped with a helpless credulity that would give P.T. Barnum pause.

Tom Engelhardt, writing the other day at TomDispatch.com about “the nonstop growth of the Pentagon and its influence,” notes the irony of the fact that “even as the U.S. military has failed repeatedly to win wars, its budgets have grown ever more gargantuan, its sway in Washington ever greater, and its power at home ever more obvious.”

He adds: “In Iraq, Afghanistan, and elsewhere, you can see that Pentagon version of an American foreign policy straining to be born. In the end, of course, it could be stillborn, but it could also become an all-enveloping system offering Americans a strange, skewed vision of a world constantly at war and of the importance of planning for more of the same.”

Military-industrial capitalism, with its arrogant disregard for the human and environmental consequences of its activities, can have only a limited run on Planet Earth, but it doesn’t know this and has no inner, self-restraining mechanism. If we wait for its natural collapse, we’ll all go down with it. I would call this security code red, ladies and gentlemen.

But perhaps a door is opening. I repeat the question I asked at the beginning of this column. What does it mean that the New York Times is calling the Iraq disaster a pointless war? I know what it should mean: that such an awareness triggers an outbreak of responsible journalism throughout the corporate media, beginning with a curbing of military and disgraced neocon influence over what is proclaimed news.

Even this is too much to expect, of course, but we must demand it anyway, as we limp toward the ninth anniversary of 9/11, amid the screaming forces of fear and hate that would militarize this day of reverence and turn it into a grand occasion to make more enemies and celebrate our ignorance and isolation.

Robert Koehler is an award-winning, Chicago-based journalist, contributor to One World, Many Peaces and nationally syndicated writer.  His new book, Courage Grows Strong at the Wound (Xenos Press) is now available for pre-orders. Contact him at koehlercw@gmail.com or visit his website at commonwonders.com.

One response to “Implications of a Pointless War”