The Party of Organized Money

REMINDER (for those of you in the Chicago area), my book-launch celebration party will take place at 8 p.m. Saturday, Nov. 6, at the ledgendary Heartland Cafe, 7000 N. Glenwood Avenue, Chicago.  My new book, Courage Grows Strong at the Wound, is now on sale. Please see info following this week’s column. 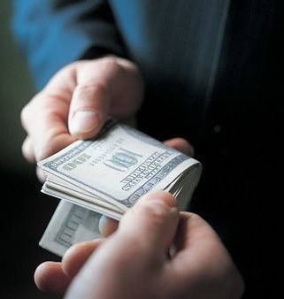 Thud goes hope. Whatever the causes of “voter dissatisfaction” and voter despair that gave the party of destruction so much power back, I sit in dread the next morning not so much of the results as of the phenomenon of openly purchased elections.

“The midterms have shattered spending records for a nonpresidential contest, providing a likely blueprint for the frenzy to come when the White House is up for grabs in two years.”

So the Washington Post informed us on Tuesday. The exaggerated influence of corporate money in politics and government has always been a problem, but last January the Supreme Court threw open the floodgates, overturning all restrictions on corporate spending to influence election results. Its 5-4 ruling in the closely watched Citizens United vs. Federal Election Commission case advanced the spooky cause of “corporate personhood,” giving Wall Street and the military-industrial complex the same free-speech rights as actual people, which means moneyed interests have a new way to game the system.

What we’re witnessing in the United States, as democracy becomes an ever hollower shell, is the entrenchment of corporatocracy, which right now wraps itself in a Tea Party cloak, creating the illusion that it stands for something other than its own interests — and that voters are making some kind of reasoned statement to power, that the American little guy is speaking in a collective voice rather than being manipulated by outside forces via the enormous power of television advertising. 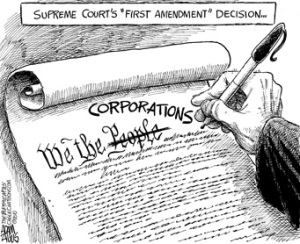 “The 5-4 decision in Citizens United vs. the Federal Election Commission handed Republican strategists something they long sought, the ability to raise unlimited money from corporations,” writes Dan Morain in The Sacramento Bee. Mostly this money, often from unknown sources operating in coy independence from the candidate that represents their interests, goes into negative advertising, whipping up the climate of fear and animosity that, far more than actual issues, characterizes American elections.

“These outside groups are basically the nameless, faceless assassins who come in at night to take out the opponents,” the Washington Post article goes on to say, quoting political scientist Lawrence R. Jacobs. “The candidate and party money will no longer have to do the heavy lifting on the negative ads. It’s being outsourced to these shadowy groups.”

Nearly $300 million was spent by these outside groups in the 2010 election, according to the Center for Responsible Politics. And the biggest spenders were Republican/Tea Party-friendly entities such as the U.S. Chamber of Commerce and American Crossroads and Crossroads GPS, behind which lurks none other than Karl Rove, the nation’s master election manipulator.

“Overall, for every $1 a liberal group has spent on (election advertising), a conservative group has spent $2, the Center’s research shows,” Megan R. Wilson writes at OpenSecrets.org.

In my naïveté, I keep believing in a textbook democracy of informed voters making serious decisions that reflect a reverence for the electoral process. To be enfranchised means to have a voice in our collective future. I still believe we have such a voice, but it is increasingly ill-served by the system that purports to protect it. Electronic voting has given us unverifiable election results and the Supreme Court has given organized money the right to dominate the political agenda like never before.

And corporate domination of what we talk about and what we don’t talk about — e.g., the wars in Afghanistan and Iraq and their effect on our bleeding economy — is far too compliantly accommodated by the mainstream media, which serves up an issue-lite, post-modern democracy to the American public pumped up with fake, “Monday Night Football” excitement.

As I noted at the time of the Supreme Court’s Citizens United decision in January: “The tendency of money and power is to concentrate. The big trick, from a human perspective, is to make sure our core values remain pre-eminent, that they are served by the ways in which we concentrate power. Democracy is the great mechanism for doing so, the hope of the world, or so we are told, but the wakeup message in this nakedly cynical ruling by the Roberts Court, with its slim (but sufficient) right-wing majority, is that the concept of democracy is mortally wounded.”

This mortal wound is manifested not only in who wins and who loses, though this is part of it, but in the choices we see available to us as we cast our votes. The mediocre turnout that characterizes American elections reflects the fact that most people of voting age — even most registered voters — don’t believe these choices matter much in their lives.

I believe this is because the party that never gets voted out of power is the party of organized money.

Robert Koehler is an award-winning, Chicago-based journalist, contributor to One World, Many Peaces and nationally syndicated writer.  His new book, Courage Grows Strong at the Wound (Xenos Press) is now available for pre-orders. Contact him at koehlercw@gmail.com or visit his website at commonwonders.com.

Courage Grows Strong at the Wound (Xenos Press) is now out.

The book is a collection of my essays fused into several narratives. They run the gamut from the highly personal (dealing with grief, the death of my wife, single parenting) to the acutely political. The book is about the quest for both inner and outer peace, the urgency of both, and the fragile future we are giving birth to.

The discounted price, which includes shipping and handling, is $25.
If you would like to place your order, please specify how many books and make out check for the appropriate amount to Robert Koehler. Please include your mailing address!

One response to “The Party of Organized Money”