Globalists Can Win Cyber War, But Not Information War 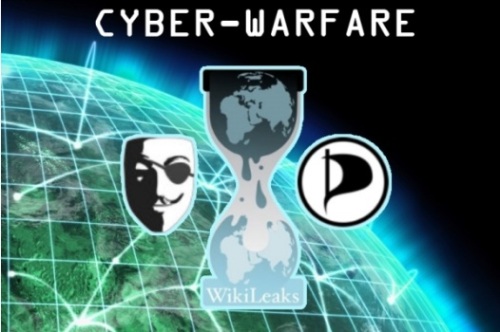 The establishment has been desperately trying to implement legal control over the Internet. They’re attacking freedom of speech and the open Internet from all angles; through government tools, corporate methods, and even the courts. All three of these methods are converging in the WikiLeaks case, but that’s not the only battle being waged in the so-called “all-out cyber war.” [Image]

The government, through the DHS, has already shut down over 80 websites for copyright infringement without due process, in addition to floating the idea to tax information websites. Corporations like Google, Verizon, and others are making deals to tip the Internet in favor of major players.  Finally, in the courts, ambulance-chasing copyright infringement lawyers are bullying blogs to pay settlements despite Fair Use rights — while their ultimate goal is to set a golden precedent with which to attack all news aggregating websites.

Don’t you see what’s happening here as the media continues to hype this cyber war?  Because of the fierce resistance to all proposed changes to the Internet, they need an Internet “Pearl Harbor” to usher in these draconian laws. As the hacktivist army of WikiLeaks defenders are now reportedly turning their focus on UK government websites, we can expect that after the first major Web interruption, governments will convene urgent meetings to demand better enforcement and more control over the Internet.

Therefore this cyber war would seem to be playing right into their hands — as already, mainstream polling on the sheeple ranch called the United States shows that 70% believe Julian Assange and WikiLeaks is doing harm and should be prosecuted.  It won’t be difficult to convince the masses to shut down dissent if essential infrastructure is “attacked” in this all-out war.  Especially if that infrastructure is the Web itself.

Indeed, even the aware among us would suffer greatly if the Internet was down for multiple days.  It is our heroin, our entertainment, our news, our communication medium,  our livelihood . . . in essence, our freedom.  I think most of us would beg for at least limited access after less than a week of being blacked out.  We’d be on our hands and knees saying, “We don’t need all of it; just give us enough access to get our fix.  Please, I’ll even register for an Internet tracking ID number.”

Incidentally, it would seem the elite know the power they have over this technical opiate of the masses simply by shutting it down when the offensive anarchy gets too chaotic.  They will simply switch the Fortune 1000 over to Internet 2 and let us vermin swim in the virus-ridden battle-torn Internet 1.  Don’t worry, though, they’ll let us buy controlled access to their network where they will openly track, trace, and database our every keystroke and mouse click.

However, this war is not about technology, it is about the freedom of information and ability to view it in privacy.  Anyone who is fundamentally against WikiLeaks is the enemy of free speech, because WikiLeaks has become the poster child for the people’s right to information.  The stronger a critic expresses their disdain for WikiLeaks, the more tyrannical we can expect the response to be.  In other words, the more dangerous they can make WikiLeaks out to be, calling them “high-tech terrorist” and the like, the further the compromise bar is pushed in the establishment’s direction.

Because the establishment is already in control of the technical gears of the Internet, they can and will win a technical cyber war — even if they have to go nuclear and pull the plug to do it.  The hacktivists fighting for Internet free speech have truth and principle on their side, yet they may be falling into the King’s trap quite effectively.  Just as the establishment needs violent street protests to justify their armored police state, they also need offensive protests by these hacktivists to justify policing the Internet.

Victor Hugo famously said, “All the forces in the world are not so powerful as an idea whose time has come.”  The ideas of liberty, justice, peace, and the right to open-source knowledge has come of age; it is clear that the globalist machine is opposed to these ideals — thus they’re losing the information war.  Therefore, they must attack the battlefield of the infowar under the pretext of protecting cyberspace from those pesky freedom-of-speech bandits.

This so-called cyber war will likely fester into a Pearl Harbor-type event.  When it occurs, the mainstream media will incite fear in one hand and sell the solution out of the other.  We must be aware of their tactics and keep fighting for Internet freedom with heavy doses of the truth.