Sinister secrets in the sky and Morgellons disease 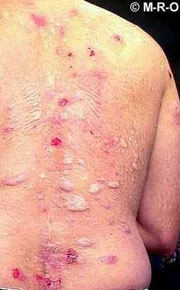 EVERY few months the Green Party makes a bit of a fuss about chemtrails – those white lines you see in the sky that look like they came from an aircraft. They did, but that’s only where the arguing begins. As conspiracies go, chemtrails are right up there with crop circles and cattle mutilations. There is no question that they exist because we can see them. The question is how did they get there, who are the culprits and why are they doing it?

Trying to find answers? Good luck with that.

The reasons given as to why chemtrails exist, are as many and varied as the who and the how. A quick Google search gets you 1.5 million hits in total. Chemtrails plus weather gets 370,000, chemtrails plus mind control 352,000 and chemtrails plus depopulation 149,000. The most reported chemical that is being rained down on us via chemtrails is barium and possibly aluminum, according to the view from the grassy knoll.

Governments and scientists say there is no such thing as a chemtrail. They would of course, and that’s what makes for a good conspiracy.

The simple explanation from the official side is that the trails are only condensation left by ordinary commercial aircraft. These are called contrails.

‘Chemtrailers’ insist that the dubious sky tracks criss-cross, whereas contrails form in a straight line and disappear much more quickly from view.

Last Sunday an event was held in Paphos to highlight the issue. Not only is the Green Party on board with the issue, and calling for an investigation, but there is also a special committee against chemtrails in Cyprus.

Spokesman Petros Theodosiou said: “We have noticed planes leaving chemtrails above Cyprus for some time now and the problem is getting worse. It would be naive to believe that the Cyprus government is not involved in some way.”

Theodosiou said someone in the government must know what was going on – especially in Paphos where it seemed to be heavier. People should stand up and demand to be informed. He said he believed the chemtrails had something to do with the food chain and suggested many people were suffering increasingly from illnesses such as Alzheimer’s, and many respiratory diseases in Cyprus.

“Certain authorities at the top level must know what’s going on. This goes beyond governments; we are convinced that if we all get up and say no then we can stop this,” Theodosiou said.

“We challenge the authorities to prove us wrong. The president of the chemists in Greece recently suggested to the Cyprus parliament that the easiest and most effective way to test for chemtrails would be to send a plane up in the skies above Cyprus, with air filters, which could collect samples of air. These could then be analysed.” He said it would only cost around ten thousand euros. “This would solve the mystery,” he added.

Commissioner for the Environment, Charalambous Theopemptou was mostly on the fence on this one but is interested in the topic. He said that images recorded on personal telephones by airline pilots during flight, and available to watch online, seemed to show planes spraying “something”.

“There are two or three theories going around as to the purpose of this spraying, I believe it may be to increase the range of spy equipment. Whatever is being sprayed is creating a reflective block so that lost electromagnetic signals may be bounced back to earth at a far cheaper cost than using satellites,” Theopemptou said.

“It might be happening. It could be possible but to determine facts we should test and study,” said Makris. “But who would actually carry out the study and supply the funding, I don’t know.”

Makris pointed out that there are legally approved operations in many countries to control pests and birds, where spraying occurs. “For example in Greece, the public have asked on occasion for spraying to take place to control mosquitoes,” he said. “If society here is looking for answers, then testing should be done. We have to put this into perspective, there are other health risks which face the population every day, which are apparent in water, air and food.”

Since 2007, Professor Manfred Lange has been the founding director of energy, environment and water research centre of the Cyprus Institute.

He said he was not a great fan of the notion of chemtrails. “I’m not disregarding it but it’s questionable. Generally I am skeptical,” he said.

Lange said that he found it quite unlikely that it would be going on in Cyprus but if it was proved that it was, he would be “angered and shocked”, especially if it was threatening the public health.

Lange admitted he had heard of spraying in connection with weather manipulation, such as cloud seeding, which does use chemicals to try and make it rain. “I think this is very costly though, and our knowledge of the side effects is very limited,” he said.

“Of course I have heard people talk and discuss the matter of chemtrails and spraying, and I understand the public’s concern. But let’s try to distinguish alarmism from the facts, and not panic,” he added.

Theopemptou said most chemtrails were reported over the Paphos region and between Paphos and Limassol. “If you consider where the bases and listening posts are in Cyprus, this is suspicious. I have talked to meteorologists who have said that any material falling to the ground from planes spraying anything over Cyprus would be in miniscule amounts. The wind would take it over the sea of towards Lebanon,” he said.

The Comissioner said that he was not saying for certain that chemical spraying was taking place in the skies over Cyprus, but added that based on the hundreds of complaints he had received about it, it did warrant further study and investigation to draw “irrefutable conclusions on the matter, one way or the other”.

A BRITISH biologist who lives in Paphos has been studying chemtrails for years and has even taken samples and given them to the Agriculture Ministry. A more pressing worry however for Caroline Carter are her recurring bouts with Morgellons disease, which she, and thousands like her, believe is linked to chemtrails.

Carter, who now practises alternative therapies, moved to Paphos from the UK in 2008 to escape what she believed to be harmful chemtrails over Surrey.

The biologist says that chemtrails were not really apparent when she moved to the island three years ago but that occurrences had greatly increased by 2010. “I’m a scientist and I like to work on what I know. I have samples, so know chemtrails are happening. As to the reasons why, I don’t know.”

Carter believes she contracted Morgellons in the UK after one morning finding her garden and surrounding area “covered in a very strange web-like substance”. She said it was thicker than an insect web, fluorescent, and resembled chicken wire, and the green foliage on which the material had settled quickly died. While collecting the web she felt a bite or a sting on her left upper arm, which continued to itch for months. She also breathed in fibres from the substance.

“I got in touch with researchers in the States who had been investigating chemtrails for quite a long time. I received info and air samples, which had been collected after heavy chemtrailing.  They seemed to be highly pathogenic and contained all sorts of strange things,” said Carter.

Carter sent samples of the fibres that came out of her skin to other biologists but no one could identify them.

“The fibres are alive; yet you can’t dissect them and they are unbreakable. They are inorganic but they are alive,” said Carter. She has also tried burning them but they did not carbonise. However if fibres are protruding through a patient’s skin they pull back at a lit match, Carter said.

In the most recent outbreak in November 2010, Carter says the fibres, some of which appeared to have insect-type legs came out of her face and neck.

“We need geneticists to look at this. As a biologist, I know what things should look like, and I and other biologists have never seen anything like this before. My face was horrific and very painful.”

Carter says after she handed over a file on chemtrails to the authorities, she subsequently received a visit from a man who said he was from the Cyprus government “and they know about it and wanted it kept quiet,” she said.

Morgellons is a controversial condition referred to by the American Centers for Disease Control as unexplained dermopathy. Most sufferers – in the US there are around 60,000 – believe their condition is caused by chemtrails. They complain of sensations of itching, stinging or biting, finding blue, red, black and clear fibres on or under the skin; and persistent skin lesions with black specks falling off their bodies.

Reports have been made of different bugs and worms coming out of the body through the lesions. Most doctors, including dermatologists and psychiatrists, regard Morgellons as a manifestation of known medical conditions, including delusional parasitosis, where patients hold an imaginary belief that they are infested with parasites. However this does not explain the actually existence of the fibres, for which there is substantial evidence.

A researcher at the Oklahoma State University Hospital found that dermatologists who either didn’t look at all, or didn’t use a dermatoscope, might not see the fibres under the skin.

“I have this weird, incurable disease that seems like it’s from outer space. Fibres in a variety of colours protrude out of my skin like mushrooms after a rainstorm: they cannot be forensically identified as animal, vegetable or mineral. Morgellons is a slow, unpredictable killer – a terrorist disease,” she said.

“In America, Morgellons is always diagnosed as ‘delusion of parasites’, and they send you to a psychiatrist. I’m actually trying to get out of the music business to battle for Morgellons sufferers to receive the credibility that’s owed to them.”

Also see: Morgellons Victims Across the US and Europe (Part 1) at Voltaire.net. (related: Morgellons and the CIA’s MK/NAOMI Project, Part 2)

Musical Artist Joni Mitchell being treated for Morgellons Syndrome – Does Joaquin Phoenix have it? (Above Top Secret, Feb 21, 2009)

CBS News (run by the CIA) has decided to tackle the subject of chemtrails. CBS Atlanta wants folks to send them their chemtrail pics (with descriptive info) to pics@cbsatlanta.com. They interviewed Michael Murphy about his film, What in the World Are They Spraying?

10 responses to “Sinister secrets in the sky and Morgellons disease”