What Bertrand Russell May Have Missed 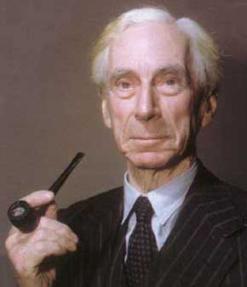 A thought occurred to me yesterday just as Father Richard Rohr was reformulating truth in terms of Hellenistic (Greek) Thought versus the kind of thoughts that Jesus of Nazareth was allegedly spinning out of whole cloth with regards to the “holy trinity.”

Here are the three principles of Greek Thought that underpin all of western “civilization”:

Russell goes on to suggest that, “nothing can both be and not be,” and “everything must either be or not be.”

Interesting choice of words, “everything,” and “nothing.”

What if “nothing” has some existence, however temporary?  What if “nothing” can both be and not be?   That is, after all, what Russell said, did he not?  And what happens to the unfortunate soul who confuses “nothing” with “everything?”

Welcome to humanity.  In this mindscape, we both confuse everything with nothing and then go on to build gigantic infrastructures designed to sustain our commitment to nothing as being everything anyone could possibly find valuable.  The Greeks might, “want no freaks,” but even their superior cultural will was incapable of sustaining a bivalent, binary, black or white universe of which humans could be a part.  It seems the very act of excluding the possibility of tripartite reality made the Greeks into the freaks they wished to have removed from relevant consideration.

As modern phenomenologists like Edmund Husserl might assert, observation is composed of the observer, the observed and the process of observation.  Or, if one prefers, the Father, the Son and the Holy Ghost.  All three can be considered inexhaustibly separate, and yet it is only when our understanding of each has been brought together that any human person begins to make meaning out of their human experience.

More plainly, those who would choose to focus on only the godhead, or only on the Creation or only the processes relating godhead to Creation can only manifest their own apriori “arrangement” of tripartite reality.   So if we believe the godhead, Father or the Observer is what manifests reality, we see a reality where a First Cause by some process manifested a universe.  Completely irrelevant to these folks, then, is the possibility that there is no First Cause, there has only been an eternal process grinding out causes and effects.  Even more unlikely, the godists could spare no time for the serious consideration of a universe that has been forever and eternally engaged only in observing itself with no particular guidance or rules of process to obey or hold in abeyance.  And yet, when we say that nothing can both be and not be, the possibilities for arranging a tripartite ontology number at least eight.  And this is because, as human beings, our lack of an eternal pedigree, or stake in the same, renders us homeless and truly free to decide how we might wish to construct our reality for ourselves.

Left unsocialized or divided against one another, these eight possibilities all form closed systems of sanity that could well exclude the remaining seven possibilities from ever being seriously considered for any merits they might offer our buggered little minds.  Our Greek-infiltrated cerebellums might see choice six of eight as the only possible rational arrangement of tripartite reality, which polarizes the other seven worldviews as decidedly, “insane.”

I mention all of this confusing ontological and epistemological chatter because it forms the basis from which human thought arose in response to a decidedly confusing, decidedly chaotic lived experience, many eons ago.  People killed one another with little provocation save the need to preserve a certain amount of foodstuff for personal survival.  People murdered their fellows because they wanted their mates or any of their other resources.

Into this bubbling cauldron of anxious uncertainty came the precepts of religion and the beginnings of a universal moral code of human behavior.  The hope in this case would be that human beings would no longer have to walk about with one eye over their shoulder peeled on their neighbor’s curiosity or envy.  We would all come to value peace and harmony as principles for good orderly living.

As always happens when geography and human limitations manifest themselves, those who huddled together to form klans or villages became isolated from the rest of their fellows.  And so the defense we erected against our own avaricious natures manifested itself in the distrust and disdain we held for those outside of our klan or our village.  It simply did not matter if we all subscribed to the same texts of moral behavior; the proof could only be found in the putting of observable behavior.

Once the desire to impose volition upon communal hope manifested itself in the form of large concentrations of churchly wealth, institutions of moral authority began serving only themselves and not the greater good of human beings.  Tortured logic and the logic of torture began to remanifest itself in human beings representing institutions whose initial purpose was nothing akin to contemporary behavior.  When nothing can be confused with everything, imaginary crimes can be punished by death and threat of death, all with impunity.

Out of the bubbling cacophony of churches and nonsensical assertions of power and control came the voices for reason, voices who held the contradiction between goal and present behavior up for all to see, offered up a third way to manifest both morality and civilized progress: the scientific method.  Science could somehow superimpose itself atop all of the noise and chaos of civilizations learning to become more civil and humans learning to become more humane.

But old institutions do not die until long after they are buried, and old ways of thinking outlive even the institutions responsible for bringing them to the fore.  So science became as perverse and dogmatic as those religions it claimed to be defending humanity against.   Absent has been the ability of human beings to regard religion and science as tools for social progress; instead, each must be held to the heart of conviction as one holds both sword and shield in an imaginary battle of all or nothing.  Except human beings have long since forgotten their confusion of everything with nothing, nor do they recall their realization that nothing is the ONLY thing that can both be and not be at the same moment of eternity.

You, me and the motility provided by our physical bodies – these things come and go, rise and fall, come to be and just as quickly pass away because no thing cannot last for anything like an eternity.  That which is perfect outlasts all things and there is no thing in this universe of ours that has ever been known to have always been and observed to always be true.

The hope lies with our thoughts on all of these matters both now and into the future.  Our thoughts and ideals transcend the bounds of time and space, defy the laws of conservation of energy, and grow more and more abundant as they are shared one to another over time.  It is in our thoughts that our imaginations are fired and our relevant truths highlighted so as to ensure our future survival.  We may pass away as a species, but the ideas we share with whatever Life turns out to be should preserve what we have learned about what it means to pass this way, to feel as we feel and to do as we must do.

No thing can both be and not be, but nothing can do both.   Even Bertrand Russell said so, without actually realizing it.

2 responses to “What Bertrand Russell May Have Missed”