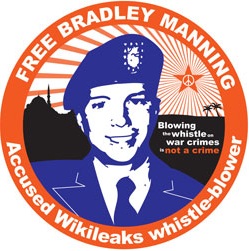 The online payment provider PayPal has frozen the account of Courage to Resist, which in collaboration with the Bradley Manning Support Network is currently raising funds in support of U.S. Army Pfc. Bradley Manning. PayPal was one way people–especially international residents–were able to contribute to the grassroots effort supporting the accused WikiLeaks whistle-blower.

“We’ve been in discussions with PayPal for weeks, and by their own admission there’s no legal obligation for them to close down our account,” noted Loraine Reitman of the Bradley Manning Support Network (Support Network). “This was an internal policy decision by PayPal.”

“We exchanged numerous emails and phone calls with the legal department and the office of executive escalations of PayPal,” explained Jeff Paterson. “They said they would not unrestrict our account unless we authorized PayPal to withdraw funds from our organization’s checking account by default. Our accounting does not allow for this type of direct access by a third party, nor do I trust PayPal as a business entity with this responsibility given their punitive actions against WikiLeaks-an entity not charged with any crime by any government on Earth.”

The Support Network repeatedly requested and was refused formal documentation from PayPal describing their policies in this matter.

PayPal is a private company and thus under no legal obligation to provide Courage to Resist, the Bradley Manning Support Network, or anyone else with services. This was something made very clear to the Support Network by PayPal representatives.

“They opted to apply an exceptional hurdle for us to clear in order to continue as a customer, whereas we have clearly provided the legally required information and verification. I think our dealings with PayPal should be a cautionary tale for any possibly controversial not-for-profit entity with a PayPal account,” Paterson said, “While there may be no legal obligation to provide services, there is an ethical obligation. By shutting out legitimate nonprofit activity, PayPal shows itself to be morally bankrupt.”

Courage to Resist registered the PayPal account in 2006. There were no issues with this account until supporters were encouraged to donate via PayPal to help fund the “Stand with Bradley Manning” public statement and petition effort (www.standwithbrad.org).

In late 2010, PayPal, MasterCard and Visa closed down payment services to WikiLeaks, severely restricting that organization’s ability to accept online donations.  Within days, Courage to Resist project director and Support Network steering committee member Jeff Paterson fielded lengthy calls from executives at PayPal regarding website content, the intended use of the funds being solicited in support of Bradley Manning, and accountings of the recent purchases (primarily envelopes, paper, and postage stamps) made with PayPal funds.

The PayPal account was briefly restricted at that time pending organizational “verification.” To meet PayPal’s standard verification requirements, the Support Network opted to open a line of credit with PayPal and provided Social Security numbers and other financial details in doing so.  Approximately a month later on January 29, 2011, PayPal decided that these standard protocols did not apply to Bradley Manning related efforts.

Donations made via Visa, MasterCard, and Discover–along with checks and money orders–remain unaffected. Funds donated to Bradley Manning’s defense fund are used for legal defense expenses, public awareness efforts, and minimal administrative costs. Information regarding donations, including a fiscal accounting of funds, is publicly available on the Internet at www.couragetoresist.org/bradley

Manning is an American soldier who has been held in solitary confinement since June 2010.  He is currently being held in pre-trial confinement at the Marine brig in Quantico, Virginia, and is not expected to face court martial until at least October 2011. Manning has been convicted of no crime and has a Constitutional right to a fair trial. The Support Network is dedicated to ending Manning’s extreme and illegal pre-trial punishment, ensuring he receives civilian legal representation of his choosing, and thwarting efforts by the U.S. government to hold a secret trial, out of sight of media and supporters. The Support Network has no organizational ties to WikiLeaks.