Today on Progressive News Radio at 12 noon Eastern, Alison Rose Levy will interview Mary Holland, one of the editors of Vaccine Epidemic: How Corporate Greed, Biased Science, and Coercive Government Threaten Our Human Rights, Our Health, and Our Children.  Then, at 3:00 pm Eastern, Robert F. Kennedy, Jr. will interview both editors, Holland and Louise Habakus on Ring of Fire Radio.

It may as well be a cry to God for delivering their fate to corporate greed in complicity with their own government. Not surprisingly, the cry is not without proof. For instance, the most compelling argument against the uselessness of measles vaccine is made from a notoriously high death rate of this disease at nearly four percent in 1900 to virtually zero by 1948, fifteen years before measles vaccine was introduced in 1963. A similar observation applied to the not so deadly infectious diseases including scarlet fever, typhoid, whooping cough and diphtheria. The death rate due to Rubella, Mumps and Chicken Pox was so minute that it did not even make to the epidemiological list.

Why then, is the ongoing push for more and more vaccines and boosters especially since their application is increasingly being associated with a concomitant increase in childhood illnesses, including autism, diabetes and various other autoimmune conditions? It is a legitimate question. It is one that should be answered by politicians of all stripes, the medical profession and the justice system to serve the public interest.

A must read book. 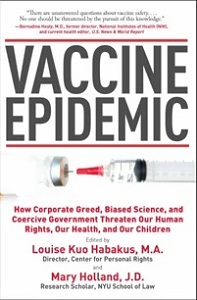 Louise Kuo Habakus, M.A. is the director and cofounder of the Center for Personal Rights, a nonpartisan, nonprofit organization dedicated to preserving and defending the human right to vaccination choice. She was a managing director for Putnam Investments, a corporate vice president for Prudential Financial, and a consultant with Bain & Company. She graduated Phi Beta Kappa from Stanford University, where she also received a graduate degree in international policy studies. She has appeared in numerous media outlets, including ABC World News Tonight, Fox & Friends, and The New York Times.

Mary Holland, J.D. is a research scholar at NYU School of Law. She has clerked for a federal judge and worked at the Lawyers Committee for Human Rights and at prominent U.S. law firms. She has testified before Congress, filed amicus briefs, and appeared on Court TV, Fox, CBS, and NBC. She graduated from Harvard College and holds graduate degrees from Columbia University. She is a cofounder and board member of the Center for Personal Rights, a nonpartisan, nonprofit organization dedicated to preserving and defending the human right to vaccination choice.

One response to “Vaccine Epidemic, the Book”