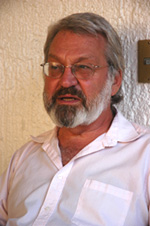 After a vibrant life, Joe Bageant died on March 27 following a four-month struggle with cancer. He was 64. Joe is survived by his wife, Barbara, his three children, Timothy, Patrick and Elizabeth, and thousands of friends and admirers. He is also survived by his work and ideas. According to Joe’s wishes, he will be cremated. His family will hold a private memorial service. 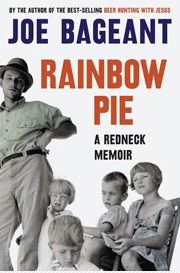 A Review of Joe Bageant’s Rainbow Pie: A Redneck Memoir

This book is all about the post WWII shift from Maw and Pap’s agrarian democracy to the urban-dominated/techno/bureaucratic/ military/security/consumer Empire of today, showing how that shift and the resulting class stratification has led us to the brink of economic and ecological collapse, writes Donnelly.

Q: How do you know if you are rich, middle class or poor in America?

You always hear about natural-born musicians, artists, teachers, nurses, even businessmen. But what happened to the natural-born farmer and extended farm family when the rural-to-urban migration saw us go from 92% of Americans making their living (and dying) on the land in 1900 to around 2% today? What happened to the natural sense of community that engendered — that “we’re all in it together,” culture we now long for? And, what about America’s supposedly classless society? How’s that working out for ya?

Here’s a new book that answers these questions and more.

Nobody writes about class in America and about America’s unacknowledged class war like Joe Bageant. Dubbed the “Sartre of Appalachia” by CounterPunch co-editor Jeffrey St. Clair, Joe writes about America’s largest, yet invisible to most, class — 60 million poor, undereducated white laborers. These are the folks who as Joe notes are on the other side of “the shower line” — those who pull off their sweaty work clothes and take their showers after their back-breaking day’s physical labor as opposed to those who shower and dress far more finely before heading off to work.

Bageant delves into the origins — his own and that of the 60 million others existing on the hidden side of the great shower line.

Joe’s memoir begins in 1951 at grandparents Maw and Pap’s small farm along Shanghai (it’s an Irish term) Road in Morgan County, West Virginia. Like many a homestead along the Blue Ridge Mountains, it was a multi-generational subsistence farm (“the farm was not a business”) that had been the norm in America before the great corporate-driven rural-to-urban shift that coincided with the end of World War Two.

Joe’s childhood days “Over Home” were whiled away on the usual attendant chores, hand-picking bugs off garden crops, watching Pap plow fields behind his draught horse or hand-harvest the large cornfield, sweating away with the adults during the all-hands-on-deck haying and wood cutting, helping with the late Autumn hog butchering, dodging the ever-present snakes and bullying older cousins and hunting with the adults or developing future hunting skills plinking holes in a broken metal bucket set on a fencepost.

For the Christian teetotaler Pap — who likely never brought in more than $1000 in any given year — freedom “resided in yeoman property rights” — the Jeffersonian ideal of an Agrarian Democracy. No one in Maw and Pap’s hard-working extended family ever went hungry or homeless. As Joe notes, this rural system of subsistence farming and barter right up the great rural-to-urban migration was “an economy whose currency was the human calorie.”

And, that’s what this book is all about: the post WWII shift from Maw and Pap’s agrarian democracy to the urban-dominated/techno/bureaucratic/military/security/consumer Empire of today. He writes how that shift and the resulting class stratification has led us to the brink of economic and ecological collapse.

Joe notes: “Damn few of us grasp how the loss of traditional aesthetic and foundational values, the yeoman tradition, are connected with so much modern American tragedy.”

The rush to “agri-business;” the obesity/diabetes health crisis; the out-migration to teeming cities; the resulting army of disposable laborers; the meth epidemic devastating the “white working-class’s futureless young”… all are tragedies personal and political. It’s also the root of our ecological crisis. You just can’t have “ten thousand years of agriculture synthesized into money” without it. Joe posits, “In all likelihood, there is no solution for environmental destruction that does not first require a healing of the damage done to the human community.”

Joe traces the family’s urban migration and the series of laborer jobs Daddy took on to support the family once they moved to town. Weekends saw the clan come Over Home and engage in the activities they always had before, especially gardening, canning and hunting. By Joe’s sixth grade, the family was bouncing around from one rental to another; the large family meals of Down Home replaced by Swanson’s TV dinners when available, and “coffee bread” — white bread soaked in coffee — when times were toughest.

Just as he did in Deer Hunting, Joe presents a thorough explanation of who “Mama’s People” are: poor, unattractive, alcoholic (or teetotaler), anti-Black, violent, petty criminal, third grade-educated, Christian Fundamentalist, NASCAR-loving, Scots-Irish rednecks whose misfortunes inspire a litany of country songs. Joe deftly explains how these folks are manipulated into serving as “bullet magnets” for endless Imperial wars and as shock troops for the mean-spirited “conservative” ideology that convulses American society today. Yet, he never demeans anyone. “Polite” society does enough of that. Joe just sticks to the facts.

As if society’s disapproval wasn’t enough, Joe explains how the corporatization of all things American coupled with a surplus of expendable heavy laborers has led to a “culture of shame.” Not only are Mama’s People the scapegoats of the educated classes, such folks beat themselves up and desperately try to hide their roots. That’s the ugly truth about Chamber of Commerce propaganda that declares that one only has value if they are producing goods for someone else’s profit or are part “of the middle class commissariat.” These “truths” and the “nothing prevents anyone from being the next Horatio Alger” myth are bought by people who then bemoan their predicament as “my own damn fault.” Many, like Bageant’s Daddy, simply recast their personal histories as a “Leave It To Beaver” happy fantasy. That kind of shaming has always kept the peasantry in line.

Joe developed an unlikely appetite for reading. He escaped the usual high school bullies by retreating to the library. Eventually he parlayed that love of books into knowledge that allowed him to get one step out of the permanent underclass he so lovingly writes about. He can write about it so well, cuz he never really left. Joe went through a series of working class jobs, just like his kin. He suffers the same work-related and diet-caused ailments.

“The Few Can Indeed Screw the Many”

The small multi-generational family farm was over by the mid-60s. By then, 22 million Americans had traveled the corporate-delineated one-way path from farm-to-city as America went from agrarian to consumer society. Once Joe’s generation of children of those who left the farms passes on, memories of what we once had will be lost, just as hundreds of years of hard-won intricate knowledge of place was lost in the great migration — gone irretrievably in less than 50 years. A society where the top 1% control 45% of the income and an even larger share of the wealth and where 67% are counting on Social Security for their entire retirement income is a class society by definition…and screwed.

But people do fight on: people in Chiapas are taking it on; folks in Joe’s backyard — Christian Greens — are fighting the crime of mountaintop-removal coal extraction; some two billion or so worldwide still do multi-generational agriculture on small plots … if they survive the same, inexorable corporatization (see, Monsanto), they’ll be in better shape when it all comes tumbling down.

These days, many educated, far more wealthy children a couple generations removed from the great shift engage in magical thinking escapism. (On some level who can blame them?) Some who do see what’s coming just retreat into an “it’s beyond fixing” paralysis. Yet, I’m encouraged that this last weekend while I was finishing Rainbow Pie, I met some young folks who are engaged in small-scale farming in the Blue Mountains out here in the northwest.

One told me she did it because “I like it. Always have. And, it sure seems like it’ll be a useful skill after the collapse.”

Two days later an environmental activist friend told me and my Wilderness First Responder buddy Tim that she was thinking of getting a nursing degree because “I figure it’ll come in handy after the collapse.” (My New Age friends would call this a whole lot of “synchronicity.”)

Even if it’s likely to be way worse than either — or any of us — envisions, their heads and hearts sure are in the right place. And, to their ever-lasting credit, they’re living the sanest response and they are not letting the bastards get their day, too.

“When Empires Die; They Die Broke”

Yep. Some folks are rising above the national denial and preparing for the economic and ecological shit-storm — the first squalls of which we are now battening down against. But, as Joe notes, we’re pretty unlikely to make a dent in the underlying causes if we continue to deny the existence of our massive, permanent underclass. We’re unlikely to dent it without an extensive, improbable multi-generational investment towards a just society. That would take years and trillions of dollars which just aren’t there; squandered on Imperial follies and sequestered in the holdings of that top 1% — virtually all of whom have multiple overseas hide-outs (see- Bush/Paraguay).

Continued denial of this ruling class-driven Apocalypse is deadly and immoral. Bageant notes that as the American class denial he has dedicated his life to shedding light upon continues … “we deny the one truth held in common by every enlightened civilization: we are our brother’s keepers.”

Down Home may well be done with. But, Joe Bageant has done a great service gleaning some sobering truths out of the ashes of America’s abandonment of agrarian democracy. If there is a future, historians then will scoff at the fabricated “truths” of the Chamber of Commerce propaganda network and look to Rainbow Pie and the collective works of Joe Bageant for a faithful, authentic explanation of just how it all went wrong.

To get a real taste of Bageant’s style, read his last political post:
AMERICA: Y UR PEEPS B SO DUM? Ignorance and courage in the age of Lady Gaga

One response to “Joe Bageant Passes; Review of his last book on agrarian democracy”