COICA 2.0 = Protect IP: US wants to scrub browsers of websites it opposes 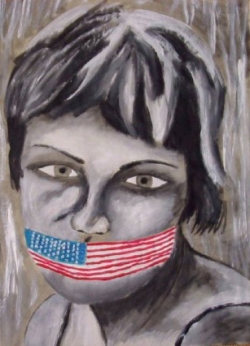 (Full text of Protect IP below) We knew that members of Congress and their business allies were gearing up to pass a revised Internet Blacklist Bill — which more than 325,000 Demand Progress members helped block last winter — but we never expected it to be this atrocious.  Last year’s bill has been renamed the “PROTECT IP” Act and it is far worse than its predecessor.  A summary of it is posted below.

Senators Leahy and Hatch pretended to weigh free speech concerns as they revised the bill.  Instead, the new legislation would institute a China-like censorship regime in the United States, whereby the Department of Justice could force search engines, browsers, and service providers to block users’ access to websites, and scrub the American Internet clean of any trace of their existence.

Furthermore, it wouldn’t just be the Attorney General who could add sites to the blacklist, but the new bill would allow any copyright holder to get sites blacklisted — sure to result in an explosion of dubious and confused orders.

Will you urge Congress to oppose the PROTECT IP Act?  Just add your name at right.

PETITION TO CONGRESS:  The PROTECT IP Act demonstrates an astounding lack of respect for Internet freedom and free speech rights.  I urge you to oppose it.

Just sign on at right and we’ll forward the petition to Congress.

Copyright infringement and the sale of counterfeit goods are reported to cost American creators and producers billions of dollars and to result in hundreds of thousands in lost jobs annually. This pervasive problem has assumed an especially threatening form on the Internet. Consumers are increasingly lured to well-designed websites that are devoted almost exclusively to unauthorized downloads and streaming of copyrighted content or sale of counterfeit goods.

These rogue Internet sites are often outside the reach of U.S. law enforcement because they are foreign-owned and operated, or reside at domain names that are not registered through a U.S.-based registry or registrar. The illegal products offered at these websites are wide-ranging, from the latest movie or music hits to pharmaceuticals and consumer products.

Today, both the Justice Department and rights holders are limited in the remedies available to block these infringing websites, even when the website is directed at American consumers and steals American owned intellectual property. Even those infringing domestic Internet sites that the Justice Department seized through its Operation In Our Sites initiative are at risk for reconstituting under an identical, but foreign-registered, domain name, which would then fall outside the reach of American authorities.

The Preventing Real Online Threats to Economic Creativity and Theft of Intellectual Property Act (“PROTECT IP Act”) authorizes the Justice Department to file a civil action against the registrant or owner of a domain name that accesses a foreign infringing Internet site, or the foreign-registered domain name itself, and to seek a preliminary order from the court that the site is dedicated to infringing activities. For an order to issue, the Justice Department must also show that the Internet site is directed at U.S. consumers and harms holders of U.S. Intellectual Property. The Department would be required to serve notice of the action promptly after filing.

If the court issues an order against the registrant, owner, or domain name, resulting from the DOJ-initiated suit, the Attorney General is authorized to serve that order on specified U.S. based third-parties, including Internet service providers, payment processors, online advertising network providers, and search engines. These third parties would then be required to take appropriate action to either prevent access to the Internet site (in the case of an Internet service provider or search engine), or cease doing business with the Internet site (in the case of a payment processor or advertising network).

The Act similarly authorizes a rights holder who is the victim of the infringement to bring an action against the owner, registrant, or Internet site dedicated to infringement, whether domestic or foreign, and to seek a court order against the domain name registrant, owner, or the domain name. However, if the order issues, the rights holder must seek the court’s permission to serve that order and may only do so on a payment processor or online advertising network, and not an Internet service provider or search engine (as available for a DOJ-initiated action).

The Act ensures that third-parties are not overly burdened to comply with an order by stipulating that the party is not required to take action beyond what is technically feasible and reasonable. Additionally, an Internet service provider is never required to modify its network or facilities to

comply with a court order. The plaintiff can request the court to compel third-party compliance only where the third party does not make reasonable and good faith efforts to comply with an order. The third-party would not be liable for any action or inaction, unless in contempt of court.

The Act includes safeguards to allow the domain name owner or site operator to petition the court to suspend or vacate the order, including in the situation in which the Internet site at issue is no longer, or never was, dedicated to infringing activities; or the interests of justice require it. Similarly, as site operators subject to an order transition the infringing websites to new domain names, the Justice Department or private party is authorized to bring a related action against the reconstituted domain name, site owner, or registrant, in the same Federal court.

The Act further protects payment processors and Internet advertising networks that voluntarily cease doing business with infringing websites, outside of any court ordered action. Those parties are immunized from damages resulting from actions taken against an Internet site where they have a good faith belief on credible evidence it is dedicated to infringing activities.

Additionally, the legislation protects consumers against counterfeit, adulterated, or misbranded pharmaceutical products sold on the Internet by providing a safe harbor for domain name registries, registrars, search engines, payment processors, and advertising networks to take voluntary action against any infringing website that “endangers the public health” by offering such dangerous medication.

The Act includes a savings clause explicitly stating that it does not limit or expand civil or criminal remedies, or enlarge or diminish vicarious or contributory liability under title 17 (including section 512). Additionally, failure to take voluntary action under the Act does not constitute liability for any party, including vicarious or contributory liability. The Act also provides that nothing in the Act shall serve as a basis for determining the application of section 512 of title 17.

9 responses to “COICA 2.0 = Protect IP: US wants to scrub browsers of websites it opposes”