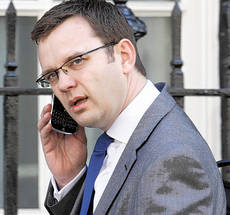 Andy Coulson, one of those arrested in the Murdoch scandal, moved from Editor of News of the World to Aide to UK PM David Cameron

Rupert Murdoch’s specialty has been the practice of journalism in cynical mockery of our desire for knowledge.

Suddenly it’s clear to everyone.

Hacking a missing teenager’s cell phone? Deleting calls, interfering with the desperate search for her whereabouts? Tapping the phones of terrorist victims, dead soldiers? What kind of newsroom culture could possibly value the intimate tidbits of unbearable worry and sorrow thus obtained? What kind of organization would call it “news”?

Even those of us long, long, long disgusted with the Murdoch brand had our moment of shock at this new low in cynicism and pandering. Something felt torn open and exposed as the details rushed out: not just a lack of ethics but an ethical void, absolute in its contempt for our lives. And this contempt is the foundation of a media empire.

Murdoch isn’t just a sleaze peddler. He’s one of the wealthiest and most powerful people on the planet — and he has a political agenda that matters more to him, I imagine, than a random billion in cash here or there. The silent virulence of his influence on public events, more than the sensational headlines and lurid scandal-mongering he inflicts on us, is my real concern.

Big as Murdoch is in the U.S., with his 24-7 rightwing propaganda network called Fox News, in Great Britain he’s bigger than the royal family. “He’s often referred to as the country’s permanent Cabinet member,” Beth Fouhy wrote recently for Associated Press. Since the days of Margaret Thatcher, he’s been the godfather of British prime ministers, able to make them offers they can’t refuse.

Since the hacking scandal hit the fan, David Cameron, the current prime minister, has been struggling to disentangle himself from his ties to Murdoch. But there’s no escaping the fact that Cameron’s former communications director, Andy Coulson, had been the editor of News of the World before joining the prime minister’s team and is one of 10 people arrested in the mess.

I don’t know if the Murdoch empire, News Corp., will emerge from the scandal intact and virulent as ever or have to be renamed News Corpse (one can only hope). But the blowing open of its operations is a stunningly teachable moment, a chance to rethink the role of journalists and the meaning of news.

As a starting place, I place side by side the two extremes of Murdoch’s exaggerated influence on our lives, our politics and our self-awareness. The spark that ignited the scandal was the revelation, by Guardian reporter Nick Davies, that News of the World staffers hacked the phone of Milly Dowler, a 13-year-old girl who was abducted near London on her way home from school in 2002. Months later, her body was discovered; she’d been murdered. Before this discovery, when there was nothing but unbearable dread and wild hope on the part of Milly’s loved ones, Murdoch minions were mining the tragedy for its titillation value, ferreting for bits of “human interest” to parade in their newspaper.

This is journalism utterly devoid of human sympathy — journalism, I would say, on the wrong side of the human race. It has zero interest in contributing to an informed society or creating social cohesion. It’s toxic junk food, a creepy sort of “reality” entertainment purveyed to bored and isolated readers for no purpose except to keep them consuming the product. It has made Murdoch rich beyond measure.

Here’s the other extreme, from Fouhy’s AP story describing Murdoch’s influence on British politics: “Murdoch eventually switched his allegiance to Tony Blair, the Labour prime minister from 1997 to 2007. Blair telephoned Murdoch repeatedly before committing British troops to the Iraq war in 2003, which was strongly endorsed by Murdoch’s newspapers across the world.”

To my mind, this magnifies the scandal a millionfold. Here’s a democratically elected head of state conferring with his secret benefactor for the purpose of bringing war to the planet. This is military-industrial journalism, colluding in war for profit, bending politicians to its interest on the strength of its financial success at peddling sleaze. Murdoch’s ethical void isn’t limited to his trashy media empire. He’s a player in war and peace.

This is journalism run amok — the precise opposite of the ideal of my profession. Rather than standing in adversarial relationship to power and representing the interests of those on the outside, it stands in adversarial relationship to common humanity. In Murdoch World, we are all abstractions, whether we have a name (Milly Dowler) or merely a mass identification label (the Iraqis).

Journalism can drift upward toward power, become its lapdog and even, as the News Corpse revelations have demonstrated, become power itself, a behind-the-scenes dictator of events, manipulating the world for its own interests.

But real journalists scatter power by telling the truth, as Davies and the Guardian have led the way in doing in the News of the World revelations. This scandal, finally, is not about Murdoch but about everyone who practices the craft of journalism. The time has come to ask ourselves: Where does our allegiance lie?

Robert Koehler is an award-winning, Chicago-based journalist, contributor to One World, Many Peaces and nationally syndicated writer. His new book, Courage Grows Strong at the Wound (Xenos Press) is now available. Contact him at koehlercw@gmail.com or visit his website at commonwonders.com.