Amy Goodman walks the Dark Side on Libya invasion

Appalling Propaganda from Amy Goodman About Libya
By Scott Creighton 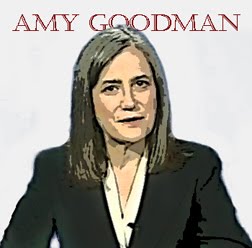 For whatever reason, she has become just another presstitute in service of the globalists who are at this minute still attacking the people of Libya, still bombing them and their infrastructure, still laying siege to cities and populations who refuse to surrender to NATO powers,  and still planning how to dice up the people of Libya’s state assets to hand them over to their favorite corporate contributors.

And Amy Goodman is in their service, lying to her audience on a daily basis.

Yesterday Amy had some “reporter” on who has been traveling around Libya (supposedly) with the “rebels” and various others, so that she could give Amy’s audience a first hand glimpse into what she (and Amy’s website) called the “revitalization” of Libya.

If this “reporter”  did actually go to Libya, she was there as an embedded journalist, just like the ones CNN and Fox News sent off to Iraq to tell the “real” story about how the Iraqis were so happy we blew the shit out of their country. Remember the Saddam statue? Remember the Jessica Lynch story? That’s embedded journalism.

So Amy Goodman has this embedded “journalist” on to set the record straight and paint a nice rosy picture of a post Gadhafi Libya. According to her, the people of Libya and Tripoli specifically, are just so damn happy that NATO bombed the shit out of them and killed many innocent civilians in the process, because…

“The mood across Libya, particularly in Tripoli, is absolutely—like there’s just a feeling of euphoria everywhere. People are incredibly relieved to finally be rid of the man who ruled their lives, minute details of their lives, for 42 years.” Democracy NOW!

And don’t worry that the people of Libya are concerned that NATO is coming in to take over their nation and chop it up and sell it off to the lowest bidder because according to Amy’s “journalist”, the people of Libya don’t think that at all. At ALL!

“One more point I want to make, which might be interesting to listeners and viewers in the U.S., is that very few Libyans I met seemed concerned about NATO hijacking their revolution.”Democracy NOW!

Of course, she was embedded with the “rebels” who were completely supported by NATO, trained by MI6 and British Special Forces, advised by Washington, led by exiled leaders who lived in Washington, funded by NATO, armed by NATO countries, and provided all the massive fire-power they needed to destroy Libya by NATO. But of course, the rebels Amy’s journalist met didn’t think that NATO had plans to take over Libya.

Well that’s good except for…

“Libya’s revolution may still be incomplete, but Western leaders are swooping into Tripoli to celebrate the rebels’ victory and offer support for the new Libya, whose success they see model for other Arab revolutions.

With sharpshooters on Tripoli rooftops, a 5-star hotel sealed by tight security, and fighting continuing less than 100 miles away, French President Nicolas Sarkozy and British Prime Minister David Cameron were today the first heads of state to arrive in the capital and embrace Libya’s National Transitional Council (NTC).

The backing of Britain and France, which led NATO’s military charge, was crucial to turning the tide for Libya’s rebels – at first little more than rag-tag militias – and enabling them to oust the Qaddafi regime.”  Alaska Dispatch

I would go on and on with this, but to be honest, Amy Goodman and Democracy NOW! aren’t worth anymore of my time or yours.

I don’t know what price it took to buy off Amy Goodman, but whatever it was, I hope Amy enjoys it a lot because she sold out her legacy of legitimacy. Her entire career is now nothing more than a bargaining chip she used to cash in big time. I hope and pray her audience has enough sense to abandon her once and for all for this shameless propaganda piece she aired on her show. The memory of her courage and dedication to the truth is now faded away completely and all that’s left is just the realization that they can get to just about anybody these days.

And Amy? Do yourself a favor. Do us all a favor. Just fucking retire before you help them justify another Shock and Awe in Syria or Lebanon or Iran, ok? We expect that shit from Bill O’Reilly. It’s kinda sad to see you doing it as well. Whatever they’re paying you, whatever they are promising you, it isn’t worth it.

We are watching you sit there looking like a vapid, pathetic shell of your former self, reading this propaganda, setting up these fake “journalists”, and going through the motions and quite frankly all you are doing is proving to them that everyone has their price. Frankly, we are sick of it. So just retire already and sit back and write your memoirs or something. Because if you think that no one has noticed the change in you over the last few years, think again.