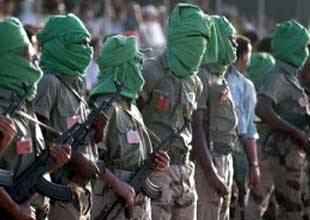 “The easiest solution was to say to the colonial powers in the beginning to come and take the oil from our people and stop the aggression.” ~Muammar Ghaddafi

US-NATO have dispatched around 1,500 foreign Al Qaeda mercenaries from Afghanistan to Libya when several hundreds of rebels were killed during recent offensive on Sirte, bani-Walid, Sabha and other towns loyal to Muamar Ghaddafi. Also the all important oil town of Ras Lanuf has been liberated by Ghaddafi forces and that oil exports by the National Transitional Council (NTC) – initially destined for western colonial masters – should now come to a standstill.

In addition thousands of tribal fighters from Southern Sahara region are joining Ghaddafi forces and the beginning of a fierce counterattack against NATO-Al Qaeda-Rebel positions is reportedly taking shape with counterattacks to commence in the next few days.

Meanwhile Muammar Ghaddafi has just delivered his latest radio message on Bani-Walid radio in which he promised to launch massive counteroffensive to liberate all of Libya.

To Libya and its free people:

Glory to you, greatest heroes of the Libyan people! You carry a proud blood of your ancestors! They were telling lies that Gaddafi is in Venezuela, and than in Niger, but I’m here with you. There are also servants of the colonialists among our people, which I’m ashamed of.

Hold on and be prepared on a daily basis. I’m receiving calls from all the cities of our Jamahiriya territory, and the zero hour will inevitably come. People who were martyred are eternal. They fought and died for their country to be free of colonialism and chains. Just as their fathers wished for in 1969. Forward! Forward!

The easiest solution was to say to the colonial powers in the beginning to come and take the oil from our people and stop the aggression. But the blood of my ancestors and my father and my children and my grandchildren and all the young children and Libyan women and Libyan men and Sheiks, blood of all who were martyred by the bombs in this aggression, pushed us to the path of defiance and rejection of colonialism.

We have said and continue to say: This is the oil of the Libyan people, not French or British. This food belongs to people. It is not my property nor theirs, it belongs to the people!

The resistors await the martyrdom of the heroes, a martyrdom which is true to the verse. To some of you who are waiting, do not be sad, because that will make you weak. Be patient for victory. Libya is not the first country in the world to be attacked by the planes and fleets of the largest coalition in the history of the world. But they overlooked the fact that Libya has a history and that Libyans are the greatest nation on earth in their resistance, persistence and defiance of the aggression! Libya will never be for traitors. Libya will be a hell for them, and a hell for NATO, the west and its agents!