Occupy the Treasury and support HR 2990 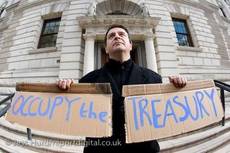 Here is a plea, hot off the press, to take the private owners and dispensers of credit out of our bizarre monetary system, and restore the constitutional function of money creation to the Federal Treasury.

Dennis Kucinich introduced a bill that would do this, only four days after the Wall Street Occupation began ~ HR 2990 The National Emergency Employment Defense Act of 2011. It’s stunning and you will love it.

It ends ‘fractional reserve’ lending (the credit casino), nationalizes the Federal Reserve, restores the federal government’s authority to originate money (without debt), pays off federal debt with the new US money as it comes due, until the debt is completely retired.

US Money would be created by a Treasury Monetary Authority and spent into circulation to fund infrastructure, education, health care, grants and loans to states. It even includes a tax-free dividend to all US citizens to directly inject liquidity into the economy.

There are powerful beneficiaries of the current system who will descend on Congress to defeat this bill. But we have a GLORIOUS revolutionary network of the 99%. This is a magical moment in history! Let’s turn this bill into LAW with massive public pressure.

With all the hysteria about government debt and deficit spending, ostensible pretexts for annihilating the public, why is no one scrutinizing the source of the problem ~ the monetary system?

Our economy has been running on credit/debt since 1913 when Congress outsourced its sovereign authority to create the nation’s money and gave that privilege away to a cartel of private banking corporations ~ the Federal Reserve System. After 1913, our so-called ‘money’ supply could only be created by banks generating credit as loans. Credit is not money. Credit is debt. Our so-called ‘money’ (Federal Reserve notes) is actually bank credit or debt. We have no United States money.

Think this through … The private individuals who control the credit supply, control the economy. They can arbitrarily expand credit exponentially, e.g. the housing bubble and $600 trillion derivatives casino, and they can also withhold the credit supply – at will – and contract the economy, e.g. the current so-called recession or ”credit crisis.” Federal Reserve chairman, Ben Bernanke, admitted that the Federal Reserve caused the Great Depression by contracting credit. The same thing is happening again today. This is why hospitals and schools are closing, businesses are collapsing, the job sector is shrinking, and municipalities have insufficient revenue … why every part of the economy is contracting. The domino effect of contraction increases as people have less to spend and can’t support local business that in turn must lay off workers. Unemployed workers have no income to pay taxes. Decreased tax revenue starves federal, state and local governments, which in turn lay off more workers and cut spending. Spending cuts and layoffs further contract the economy. Is our economy being destroyed on purpose or are these people really stupid?

Why is no one publicly questioning the power banks have to contract the economy with their monopoly control over credit? Why don’t we use sovereign money instead that is issued by the federal government, per US Constitution Article 1, Section 8? We wouldn’t have a national debt because the government wouldn’t have to borrow. We wouldn’t be at the mercy of banks that withhold credit and contract the economy because our government would inject liquidity directly into the economy. This basic truth is so obvious, there must be an unspoken reason why governments everywhere continue to borrow credit instead of originating the national money supply without incurring public debt.

Communist China and bankrupt Japan collect interest on the US debt and perhaps a handful of American citizens that invest in T-bills. But they are all latecomers and very nervous about the decreasing value of their investment.

Who else benefits? Large corporations and ultra wealthy individuals officially pay 35% in taxes, but in loophole reality WAY less, compared to 50% and 91% respectively, in 1960. Today, the federal government borrows from these two extremely affluent groups instead of taxing excessive wealth and the public pays them interest ~ an arrangement that fosters income inequality and concentration of wealth.

Who else benefits? The military siphons off 58% of the federal discretionary budget. Pentagon contractors, DHS and the “security” industry have sucked up $7.5 trillion since 9/11.  The corporate war and “security” industries are financed with borrowed credit that goes on the taxpayer tab for future generations. If Terrorism Inc had to be financed through immediate taxation do you think Americans would refuse to pay $6 trillion for illegal wars in Iraq, Afghanistan, Pakistan and Libya and $7.5 trillion for so-called “offensive security”? The cost of this antisocial spending is so excessive it would consume the entire annual income of most middle class workers. Rebellion would surely derail the corporate war and “security” gravy train.

Here are some other big beneficiaries of government debt … Wall Street financial institutions, transnational investment banks and members of the Federal Reserve System who derive billions of dollars in interest payments provided by American taxpayers. Where did sixteen trillion dollars in taxpayer loans come from to bail out corporations and domestic and foreign banks that crashed the global economy with their mortgage derivatives casino? That credit was generated by the Federal Reserve whose member banks created the crisis. Their liabilities were transferred to taxpayers and bailout funds were used to increase their monopolies. The US Treasury is their ATM and we, the taxpayers, supply the cash.

The so-called “sovereign debt crisis” that is being used in Europe as a pretext for “austerity” is classic IMF structural adjustment and has its counterpart in the US, masquerading as government deficit reduction. The predatory doctrine known as neoliberalism follows a predictable blueprint: deregulate to clear a path for criminals, drive a nation into debt, confiscate public assets as collateral on the debt, privatize the public sector, loot the treasury, slash wages, destroy unions, steal pensions, cut social spending, raise taxes on workers, and cut taxes on the wealthy. Sound familiar? Transnational predators operating through the World Bank and IMF have successfully used this blueprint to cripple one nation after another in Asia and Latin America since WWII. They moved on to ex-Soviet satellites in the nineties and are now attacking western democracies.

The global Occupy Movement has a stunning opportunity to defeat this pathological agenda by restoring sovereign monetary systems worldwide.

In the United States, Congressman Dennis Kucinich has introduced a bill that could be replicated in other countries – HR 2990 The National Emergency Employment Defense Act of 2011. The NEED Act restores the constitutional prerogative of the federal government to create the national money supply – without incurring debt – and ends ‘fractional reserve’ lending, the accounting device that banks use to arbitrarily create credit with a computer keystroke. Henceforth, ONLY the US Treasury’s Monetary Authority would have the legal authority to create US money. Banks would only be able to lend US money they actually have on deposit or borrow from the Monetary Authority. Implementation of The NEED Act would pay off federal debt with US Money as it comes due until it is permanently retired.

Money would initially enter circulation by federal spending to promote the general welfare, for example on public infrastructure ($2.2 trillion needed, creating 7 million jobs); underwriting the public education system from kindergarten through college; stabilizing social security and state pensions; funding federal mandates; making grants and interest-free loans to states for public infrastructure, education, health care and rehabilitation. In addition, the Monetary Authority would give 25% of money created to the states, and a tax-free dividend to all US citizens to inject liquidity into the economy. All without incurring one penny of debt.

Passing this legislation would give the PUBLIC control over creating the money supply and the MEANS to expand the PRODUCTIVE economy. People who are employed have money to spend which increases the number of customers for small (and large) businesses which can then hire more workers. Greater employment and increased productivity creates more state and local tax revenue which can then be spent on increasing public services. In other words, the NEED Act reverses the cycle of economic contraction engineered by private banks withholding credit – permanently.

The NEED Act nationalizes the monetary system ~ not the banking system. Serious banking regulations, Wall Street reforms and prosecutions for fraud are still in order. A top priority for reinstating the Glass Steagall Act and other Depression era protections is immediate withdrawal from the World Trade Organization 1999 Financial Services Agreement that mandated destruction of Glass Steagall and massive deregulation of the financial sector. The 1999 WTO Agreement forbids the US government to roll back these destructive mandates. By what authority? Congressional compliance with an unaccountable supranational tribunal that undermines our laws, our economy and our national sovereignty is treason.

Who wouldn’t want a public monetary system that serves the whole society? The beneficiaries of a debt scheme that siphons off our nation’s resources to finance antisocial pursuits and concentrate wealth in the hands of a few. Their lobbyists will descend on Congress. This bill will die a quiet death in the House Committee on Financial Services and never be brought to the floor for a vote unless we – the 99% – make it visible and demand its passage.

The Occupy Movement has enormous potential to transform the structural inequality built into our monetary, economic and political system. Superficial “reforms” are meaningless. Please devote yourself to building public momentum to demand passage of this bill. If we reach critical mass, we just might ‘form a more perfect union, establish justice, ensure domestic tranquility, promote the general welfare and secure the blessings of liberty to ourselves and our posterity.’

13 responses to “Occupy the Treasury and support HR 2990”