A Poem for Scott Olsen, the Veteran and Protester Put in a Coma by Oakland Police 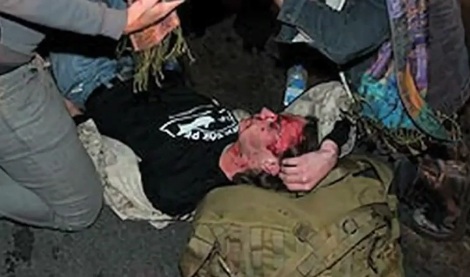 but orders are orders. I followed the game plan,
and my bosses said I acted honorably.
I was the prefect picture of a policeman

with my dark uniform, black helmet and shotgun.
Who cares if I shot a dirty fucking hippy?
My rubber bullets smashed in the face of a veteran

(the papers say) but that guy was a danger, man.
Someone had to stand up for the citizenry.
I was the perfect picture of a policeman

working overtime to enforce the city’s ban
against the mob and its freedom of assembly.
My rubber bullets smashed in the face of a veteran

and I’m sorry he’s got a broken skull, but damn
if these aren’t hard times, and I need my salary.
My rubber bullets smashed in the face of a veteran.
I was the perfect picture of a policeman.

My thoughts go out to Scott Olsen, his friends and his family in this, their hour of need. He was a courageous man peacefully defending our country’s freedoms and doing his best to protect the Occupy Oakland protestors from harm, and he did not deserve a “non-lethal” projectile fired at his head by some thoughtless and cowardly law enforcement officer.

[Note for non-poets: this poem is a known as villanelle, and the form requires that certain lines repeat throughout the poem. For more information on villanelles, please go to this website.]

An Iraq war veteran badly wounded in clashes between protesters and police on the streets of Oakland was awake and lucid, hospital officials and family members said on Thursday.

Scott Olsen, a 24-year-old former U.S. Marine struck in the head during Wall Street protests on Tuesday night, had been upgraded from critical to fair condition overnight.

Olsen, 24, has become a rallying cry for the Occupy WallStreet movement nationwide and Oakland organizers said they would stage a general strike over what a spokeswoman called the “brutal and vicious” treatment of protesters, including the former Marine.

Olsen “responded with a very large smile” to a visit from his parents, Highland General Hospital spokesman Warren Lyons said at a late-afternoon press conference on Thursday.

“He’s able to understand what’s going on. He’s able to write and hear but has a little difficulty with his speech,” Lyons said.

He said doctors had not operated on Olsen yet and were waiting to see if swelling in his brain eased.

Olsen’s aunt, Kathy Pacconi, meanwhile told Reuters in an email that her nephew was showing signs of improvement.

“I believe he knew his mom and dad were there and tomorrow he’ll be really happy to see his sister, Melissa, because they are really close. Hopefully he’ll start to improve with her visit,” Pacconi said.

Occupy Oakland organizers said their strike, scheduled for next Wednesday, was intended to shut down the city.

‘SHUT THE CITY DOWN’

“We mean nobody goes to work, nobody goes to school, we shut the city down,” organizer Cat Brooks said. “The only thing they seem to care about is money and they don’t understand that it’s our money they need. We don’t need them, they need us.”

Spokeswomen for the city of Oakland and Mayor Jean Quan could not be reached for comment.

Brooks said a general strike was a “natural progression” following a crackdown by the city of Oakland early on Tuesday morning in which protesters were evicted from a plaza near city hall and 85 people were arrested.

Protesters sought to retake that plaza on Tuesday night and were repeatedly driven back by police using stun grenades and tear gas. It was during one of those clashes that protesters say Olsen was struck in the head by a tear gas canister fired by police.

The hospital has confirmed Olsen was hurt during the protest, but could not say how he was wounded. Acting Oakland Police Chief Howard Jordan had told a news conference his department was investigating the incident.

Olsen is believed to be the most seriously wounded person yet in confrontations between police and activists since Occupy Wall Street protests began last month in New York.

News of his injury ignited a furor among supporters of the protests. Activists in Oakland and elsewhere took to Twitter and other social media urging demonstrators back into the streets en masse.

More than 1,000 protesters moved onto the streets of Oakland again on Wednesday night as police largely kept their distance.

Friends say Olsen had been active in several anti-war veterans groups and had joined Oakland protesters in a gesture of solidarity after learning of the police crackdown there.

Keith Shannon, 24, who said he served with Olsen in Iraq, told Reuters his friend suffered a two-inch skull fracture.

Olsen served two tours in Iraq from 2006 to 2010 with the 3rd battalion, 4th Marine Regiment, Shannon said, adding that he and Olsen deployed together and were assigned to a tactical communications unit.

10 responses to “A Poem for Scott Olsen, the Veteran and Protester Put in a Coma by Oakland Police”