The News of Empire 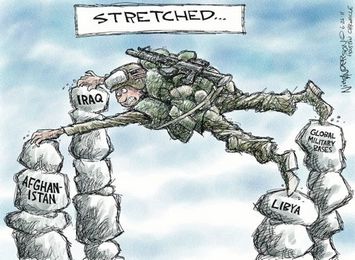 “Mr. Obama and his senior national security advisers have sought to reassure allies and answer critics, including many Republicans, that the United States will not abandon its commitments in the Persian Gulf even as it winds down the war in Iraq and looks ahead to doing the same in Afghanistan by the end of 2014.”

I pluck a paragraph from the New York Times and for an instant I’m possessed by Alfred, Lord Tennyson, aquiver with puzzlement down to my deepest sensibilities. I hold you here, root and all, little paragraph. But if I could understand what you are, root and all, and all in all, I should know what empire is, and hubris . . . and maybe even, by its striking absence, democracy.

The paragraph contains the careful verbiage of exclusion, which is the only language in which the geopolitical powers that be are able to communicate.

The paragraph, one of many that could have been plucked for study and put under the microscope of outrage, is from a story just before Halloween, by Thom Shanker and Steven Lee Myers, informing us that, while the United States will be pulling troops out of Iraq at the end of the year, the regional war is anything but over: The U.S. military will be massing troops in Kuwait, sending more warships to the region and tightening its military alliance with the six nations that make up the Gulf Cooperation Council (including Saudi Arabia and Bahrain), in order to develop “a new security architecture” in the Gulf and establish its “post-Iraq footprint.”

Or in the words of Secretary of State Hillary Clinton: “We will have a robust continuing presence throughout the region.” And this, she explains, “is proof of our ongoing commitment to Iraq and to the future of that region,” which we care about because it “holds such promise” — oh God, the compassion is killing me — “and should be freed from outside interference to continue on a pathway to democracy.”

What’s striking, first of all, is that the “news” is presented to us, under the guise of objective reporting, as a fait accompli: Our supreme leaders have the following plans, the cursory details of which they are nice enough to let us in on.

There is no counter-tide present in reporting that emanates from the national defense beat — no acknowledgement of a rising national disgust at war or our enormous military failures of the past decade, which the plans the Times story outlines merely continue.

There’s no acknowledgment even of obvious contradictions or hypocrisies, such as the fact that our presence in the Gulf arguably constitutes the very “outside interference” from which, according to Clinton, the region should be freed.

And certainly there isn’t the least irreverence: no suggestion, for instance, that we have an interest in this oil-rich region beyond a deep love for the people and their democratic aspirations; or that our partners in the Gulf Cooperation Council are autocrats who brutally repress dissent and, ahem, democracy.

The story reads, instead, like interlocking blocks of propaganda dropped into place, not so much disseminating information as protecting the security state planners from questions and challenges. This is the news of empire.

Note that when the story does acknowledge critics, those critics are Republicans, that is to say, empire fanatics as opposed to empire moderates, thus implying that the only reasonable question our post-Iraq footprint raises is whether we should be “post-Iraq” at all. “. . . American military officers and diplomats, as well as officials of several countries in the region, worry that the withdrawal could leave instability or worse in its wake.”

This much should be clear: War is a given. Got it?

And war could follow more than one trajectory. If there’s a “security collapse” in Iraq, our troops in Kuwait could quickly redeploy to the country we’ve already destroyed. But those same troops could also respond to “a military confrontation with Iran.”

Perhaps the most telling quote in the Times story was from Bahrain’s foreign minister, Sheik Khalid bin Ahmed al-Khalifa. With the United States out of Iraq, a regional alliance is necessary because, he said, “Now the game is different.”

The only thing wrong with this comment is that this isn’t a game: not our eight and a half years in Iraq, our decade in Afghanistan or our possible invasion of Iran. Innocent people have died and will continue to die in horrific numbers, toxins will spread, lives will be destroyed. The consequences cannot be contained. They are bleeding now and will continue to bleed into the future. But the Times story affects no awareness of this; it has the depth of a gamer review.

Is there a democracy at either end of the missiles, warships or troop deployments? Suddenly I’m back on the sidewalk with the Occupy movement, which has arisen at last in this era of passive citizenship to confront the embedded helplessness and hopelessness that come with the corporatocracy and its subservient media.

Citizens are standing up to the assumptions of empire. Their numbers are small — for the moment — but their spirit could prove to be irresistible.

Robert Koehler is an award-winning, Chicago-based journalist, contributor to One World, Many Peaces and nationally syndicated writer. His new book, Courage Grows Strong at the Wound (Xenos Press) is now available. Contact him at koehlercw@gmail.com or visit his website at commonwonders.com.