He’s Back: Internet censorship must be stopped 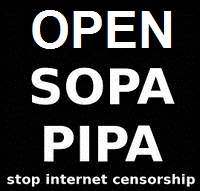 After failing to get COICA (Combating Online Infringement and Counterfeits Act) passed in 2010, he is back again this year with PIPA (Preventing Real Online Threats to Economic Creativity and the Theft of Intellectual Property Act).

Do not forget PIPA is the son of COICA.  Back then (2010) while the Vermont ACLU was nominating Senator Patrick Leahy as the Civil Libertarian of the Year, the national ACLU office was writing him a letter in opposition to COICA legislation.  Senator Wyden from Oregon subsequently tabled it.

These guys really love their acronyms.  This ridiculous name– PIPA – should have been our first clue that this is yet another attempt toput more profits into the coffers of multibillion dollar conglomerates.  As Homeland Security enhances the profits of the Military Industrial Complex under the guise of security, PIPA enhances the profits of multibillion dollar corporations in the music, film and pharmaceutical industries in the name of copyright infringement.

But the public has begun to catch on.  OWS (Occupy Wall Street) efforts and the Internet are raising the consciousness of voters.  The public is becoming painfully aware about how politics is run in Washington andPIPA is a perfect illustration of this process.  It is entirely about the control of the politicians through legal bribery.

So what if there is no real due process?

So what if thousands of innocent and tiny websites get victimized and shut down without the opportunity to address their accuser before action is taken?

So what if all accusers are to be held harmless for any false accusations that they may make?

So what if legitimate copyright infringers are victimized by this legislation?

So what if the door is now opened to more aggressive censorship and the compromise of free speech?

It is the price we must pay to get billions more into the hands of these billion dollar industries.

Does the Patriot Act ring a bell?  Without a doubt, this bill represents the most fundamental attack on our constitution.  It was first launched by a Republican and then reauthorized WITHOUT CHANGE by a Democrat.  Money, greed and legal bribery control both sides of the isle and PIPA is just another manifestation of business as usual in Washington.  Money pulls the strings and the political puppets then dance.  Senator Leahy is no different than any other politician in Washington.  Currently it is the only way to get reelected.  Those in office (the incumbents) have all the money and if they play ball with their primary contributors they get to stay in office and become very rich.

Maybe Leahy can pull off a Chris Dodd special. By anyone’s measure this former Senator was one of the most legally corrupt politicians in Washington and now he resides over the Motion Picture Association to the tune of over $1 million a year. Perhaps Senator Leahy can do several dances before he leaves office and secure a fat private sector job when he retires.

This is about big money going to big business – not to the people. The people are always second-class citizens to them, and rather than point this out to the public, mainstream media perpetuates it.

Part of copyright law and conspicuously absent from all copyright infringing legislation (PIPA, SOPA and now OPEN) and most all news outlets is a thing called Fair Use.  It is section 107 of title 17 of the copyright law.  It generally says for the purpose of commentary, criticism, news reporting, research, teaching, library archival, scholarship and the manifestation of new information, it is perfectly legal to use the works of others (copyright infringement) without their permission.

Think about this for a moment.  What invention was not created by standing on the shoulders of previous inventors?  What documentarian can describe the past without using the past to illustrate his works?  What political satirist can criticize the hypocrisy of Washington without exposing previous statements and previous actions in film as recorded by others?

Copyright law embraced a key concept when it was established and one that has been absent for quite some time.  There is supposed to be a balance between the protection of intellectual property and the public’s right to know.  It is called Fair Use and it is part of copyright law.

First off new copyright infringement laws are not even needed to prosecute these bad boys. Megaupload.com was recently shut down without using new copyright infringement laws to accomplish such. It is a strategy that appears to go after the criminals while enabling internet censorship. Want to put this matter to bed?  See how many senators will sponsor a facsimile of these words into PIPA, SOPA and now OPEN:

“This legislation is directed at all websites engaged in the sale and distribution of unaltered music, movies and drugs and as protected by U.S. trademark and copyright law.

“This legislation is not about copyright infringement as it applies to thousands of bloggers, documentarians, political satirists, re-mixers, librarians, scholars and teachers who in the course of their work often use segments from another for archival purposes, to illustrate a point, to initiate a discussion or a criticism or bring new issues to light.  This constitutes a fair use of copyright law and is fundamental to free speech and the constitution and will be protected at all costs.”

Unfortunately these bills and these efforts are far from dead.  The massive blackout on January 18 protesting them only caused a brief pause, and now a new one, OPEN (Online Protect and Enforcement of Digital Trade Act), has recently been introduced.  Free speech on the Internet is just too significant a Congressional indictment to leave alone.  My words, my film and my site will soon be under attack and I do not possess the resources to battle the DOJ and their corporate sponsors.

Under the guise of copyright infringement and intellectual protections, these legal criminals will keep coming after the Internet.  It is the last bastion of free speech on the planet and it is definitely under attack.

While you still can, visit Chris Pratt’s deceptionsUSA.com website, watch the film, Deceptions, and take action.

2 responses to “He’s Back: Internet censorship must be stopped”