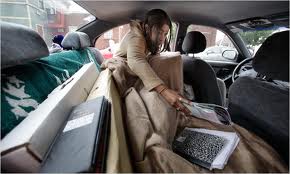 As editor of the Daily Mail in 1970s and 80s, David English invented a newspaper for those urgently seeking membership of the English middle classes. Whether his readers ever achieved their ambitions was beside the point; their prejudices and illusions were reflected, often brilliantly. Women were central to his project. The Mail became “their” paper, boasting a new “media feminism” that subtly divided men and women into opposing camps and added a dash of moral panic.

This is now standard media practice. “Most weeks some lovely, caring berks tell me I am a man-hating witch,” wrote Suzanne Moore recently in the Guardian, “so let’s get it out there. Sometimes I am. The acceptable kind of suck-it-up feminism (I love men really!) is hard to sustain after yet more abuse stories… Do I think all men are rapists? No. Do I think all women can be raped. Yes?”

How quickly the broad brush of blame is applied to a rash of dreadful murder and kidnap cases. Throw in an abduction in Cleveland, Ohio, and the arrest of “yet another TV personality”; and, according to Cynthia Cockburn and Ann Oakley, this represents “the profound, extensive and costly problem of male sexual violence.”

Part of the problem, another commentator insinuates, is that men don’t care as much as women because they don’t use Twitter enough to express their abhorrence of rape and kidnap. This all adds up to a “crisis in masculinity” requiring men to join in a “conversation” about their social and moral deficiencies on terms already decided.

I am reminded of the elevation of Australian prime minister Julia Gillard to feminist hero following a speech she gave last October attacking Tony Abbott, the opposition leader, for his misogyny. Almost no one mentioned Gillard’s hypocrisy — her stripping of benefit from the poorest single parents, mostly women, her inhuman treatment of refugees, including the detention of children, and her campaign against stricken indigenous Australians, forcing them off their land in defiance of international law. Under her watch, more Australian soldiers have died in colonial wars than under any recent prime minister.

That Gillard might be an old-fashioned class warrior and militarist was not news. The same could be said of many of the “progressive” female Labour MPs who entered Westminster with the first Blair administration in 1997 and supported their leader’s almost immediate legislated attack on single mothers on benefit, and his numerous violent adventures abroad, notably the bloodbath in Iraq. Harriet Harman, a self-declared feminist and currently Labour’s deputy leader, comes to mind.

The problem with media-run “conversations” on gender is not merely the almost total absence of male participants, but the suppression of class. It is tempting to say real politics are missing, too, but bourgeois boundaries and prescriptions are real enough. Thus, gender, like race, can be presented in isolation. Class is a forbidden word; and gender subordinate to class is heresy. The Daily Mail model is built on this.

There is indeed a crisis among men – actually ordinary men and women – and it is not their masculinity that is to blame, but the neutering of any credible resistance to a sociopathic system now given the Orwellian title of “austerity”.

With honourable exceptions, the bourgeois media club relegates and distracts from the fact that a full-blooded class war is under way. Ask the women and men in Greece, Spain and Portugal who face Robocop police in defence of their right to basic decencies: jobs, education, medicine, even food. Ask the young people in state schools in Britain who have no hope of attending university; a recent survey found 11 to 16 year olds had “given up” because they knew their families could not afford higher education. Ask the family of Stephanie Bottrill, a disabled grandmother in the West Midlands, who took her own life in despair at the assault on housing benefit known as the “bedroom tax”.

The killers and kidnappers whose trials apparently require wall-to-wall voyeuristic coverage are no less violent and no less abusive of children than a government that drives people to suicide, that sends young soldiers to kill or have their legs blown off in Afghanistan and that arms and supports fanatics in Syria and Saudi Arabia.

In incisive articles published mostly on opendemocracy.net, Heather McRobie describes how simultaneous war and “austerity” policies have exacerbated all kinds of abuse, including domestic violence. She lists “the most pitiless decimations of the country’s social goods” – from cuts in public sector jobs to the closure of emergency hospital departments and domestic violence shelters and courts. “In media discussion of economic issues circa 2008,” she wrote, “women were largely Sex and the City caricatures of white prosperity, frivolity, recession-triggering over-spenders.” Behind these gender stereotypes lay the fake “empowering” of poor women in the United States. Persuaded to buy their own homes with rotten sub-prime mortgages, African-American women and their families fell into a chasm of debt. A report by United and Fair Economy, a non-profit group, estimates the total loss to Americans of colour who took out sub-prime loans as between $164bn and $213bn. Seven of Obama’s top Wall Street campaign donors profiteered from these juicy deals, as did the major British banks – until the “bubble” burst and their “toxic” debts were picked up taxpayers, and the poor.

The imposition of this criminal debt on ordinary people is a breathtaking scandal. Why has it not been challenged with any seriousness? Where is the political opposition? Class is your answer. The style may be different from that of the Tory toffs in power, but most Labour MPs are from the new bourgeoisie. This unrepresentative managerial and professional class exercises also power right across the trade union bureaucracy; and it dominates the media. Once again, it’s time to ask: whose side are you on?

For more information on John Pilger, please visit his website at www.johnpilger.com

This entry was posted in Economy Economics and tagged austerity, class war, divide and conquer. Bookmark the permalink.