A Tribute to the Work of Homeland Secretary Big Sis Janet 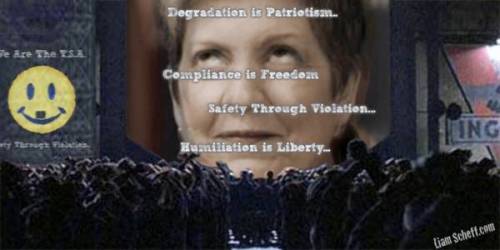 “Our dear protector,” officially Secretary of the Department of Homeland Security, is stepping down from her careful watch over the nation to take over the University of California system, and leave the job of peddling fear and stoking control to someone else for a while.

By Bob Adelmann
The New American

Many were surprised at Janet Napolitano’s announcement that she will leave her position as Secretary of the Department of Homeland Security (DHS) at the end of August to become president of the University of California. Chosen from more than 300 candidates vying for the position, Napolitano managed to keep her interest in that position, and her successful bid for it, from the public until Friday.

I thank President Obama for the chance to serve our nation during this important chapter in our history. And I know the Department of Homeland Security will continue to perform its important duties with the honor and focus that the American public expects.

In response the president issued his dutiful reply:

Since day one, Janet has led my administration’s effort to secure our borders, deploying a historic number of resources, while also taking steps to make our immigration system fairer and more consistent with our values.

And the American people are safe and more secure thanks to Janet’s leadership in protecting our homeland against terrorist attacks.

Senator Jeff Sessions, (R-Ala.), saw things just a little differently: Napolitano’s tenure has been marked “by a consistent disrespect for the rule of law,” he observed.

Almost from her first day in office Napolitano failed to grasp the difference between truth and falsehood. Taking office in January 2009, she stoked controversy and an angry response from the Canadian ambassador when she incorrectly claimed that the September 11, 2001 attackers had entered the United States from Canada. When caught, she demurred without apology:

To the extent that terrorists have come into our country … across a border, it’s been across the Canadian border. There are real issues there.

Thus began the long litany of inaccuracies, distortions, and cover-ups issued by Napolitano and her agency. In an interview with CNN’s Candy Crowley about how the DHS “system” worked in deflecting an attack on Northwest Airlines Flight 253 into Detroit on Christmas Day, 2009, Napolitano said:

One thing I’d like to point out is that the system worked. Everybody played an important role here. The passengers and crew of the flight took appropriate action. Within literally an hour to 90 minutes of the incident occurring, all 128 flights in the air had been notified to take some special measures in light of what had occurred on the Northwest Airlines flight.

When forced to correct the account, Napolitano told Matt Lauer on December 28 that her comments “were taken out of context” and admitted that in fact “our system did not work.”

Napolitano either allowed or encouraged a “female sorority house” environment at the highest levels of her department that resulted in a federal discrimination lawsuit being filed by special Immigrations and Customs Enforcement (ICE) agent James Hayes which claimed her subordinates, Dora Schriro and Suzanne Barr, mistreated and sexually harassed him and other male staffers. When Hayes first reported the misbehaviors (beyond propriety to describe here) to the Equal Employment Opportunity Office, Napolitano launched a series of misconduct investigations against him. Soon thereafter Barr went on leave and then resigned altogether in September, 2012.

One of the most outrageous incidents concerned the publishing of a threat assessment report entitled “Rightwing Extremism: Current Economic and Political Climate Fueling Resurgence of Radicalization and Recruitment” in April, 2009. The report claimed that the election of a black president, the economic meltdown, home foreclosures, concerns about impending gun control legislation, illegal immigration, and other factors were likely to drive recruiting into right-wing extremist factions. From that report:

The DHS/Office of Intelligence and Analysis (I&A) has no specific information that domestic rightwing terrorists are currently planning acts of violence, but rightwing extremists may be gaining new recruits by playing on their fears about several emergent issues. The economic downturn and the election of the first African American president present unique drivers for rightwing radicalization and recruitment…

The consequences of a prolonged economic downturn — including real estate foreclosures, unemployment, and an inability to obtain credit — could create a fertile recruiting environment for rightwing extremists and even result in confrontations between such groups and government authorities similar to those in the past.

The report referred to various “conspiracy theories” that might put the country at risk, along with a porous Mexican border:

Historically, domestic rightwing extremists have feared, predicted, and anticipated a cataclysmic economic collapse in the United States. Prominent anti government conspiracy theorists have incorporated aspects of an impending economic collapse to intensify fear and paranoia among like-minded individuals and to attract recruits during times of economic uncertainty…

DHS/I&A assesses that rightwing extremist groups’ frustration over a perceived lack of government action on illegal immigration has the potential to incite individuals or small groups toward violence.

When challenged about those “findings,” Napolitano was forced to make numerous apologies and her department admitted to a “breakdown in internal processes” in creating the report.

Congressman Jeff Duncan (R-S.C.), chairman of the Homeland Security Committee’s Subcommittee on Oversight and Management Efficiency, noted in an editorial in March that the Government Accounting Office (GAO) identified billions of dollars in cost overruns incurred by the DHS and that even the DHS Inspector General’s office identified more than $1 billion in “questionable” expenses. He pointed out that the Transportation Security Administration (TSA), one of Napolitano’s agencies, pays salaries of more than $100,000 a year to over 3,500 bureaucrats while the DHS itself was paying out performance bonuses of $61 million in 2011. As Duncan noted:

Our country is over $16 trillion in debt. Numerous examples of departmental cost overruns, schedule delays and performance problems cannot continue in this constrained budget environment.

One is reminded of General Sherman’s March to the Sea where total war against Georgia citizens was waged in late 1864 in order to destroy Georgia’s economy. The obvious benefit of Napolitano’s departure for the University of California is that she may be likely to inflict less damage there than she did as head of the DHS.