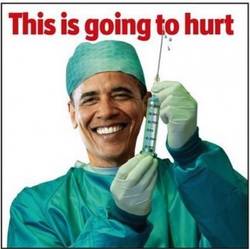 Obama promised that if you like your plan, you can keep it, period— “no matter what.”

Yet the NBC report said the government knew that wasn’t true, saying that buried in regulations from the July 2010 law was an estimate that because of normal turnover in the individual insurance market, “40 to 67 percent” of customers will not be able to keep their policy.

“So it’s true there are existing healthcare plans on the individual market that do not meet those minimum standards and therefore do not qualify for the Affordable Care Act,” Carney said in response to a question about an earlier remark by David Axelrod, a senior adviser to President Barack Obama during his first term, the Weekly Standard reported.

And NBC News, citing unnamed sources, reported that the administration knew that some 50 percent — or as many as 80 percent — of those with individual insurance policies could expect to be canceled largely because their policies don’t meet Obamacare’s minimum standards of coverage. NBC’s experts say the costs of new policies will skyrocket.

Axelrod told MSNBC a “vast majority” of Americans can keep their health insurance plan if they like it.

“Most people are going to keep their plan,” Axelrod said, according to a transcript of the remarks reported by Breitbart.

“The head of Blue Cross in Florida was on television yesterday and said there’s a small number of people being transferred to plans that have a higher quality. Most of them will be subsidized and end up paying less for those plans.”

When Sen. Tom Coburn added the switch would “double the deductibles,” Axelrod added: “The majority of people in this country — the vast majority — are keeping their plan.”

“What the president said and what everybody said all along is that there are going to be changes brought about by the Affordable Care Act to create minimum standards of coverage, minimum services that every insurance plan has to provide, so that an individual shopping for insurance, you know, when he or she purchases that insurance, knows that maternity care is covered, that preventive services are covered, that mental health services are covered, that the insurance policy you buy doesn’t have [an] annual limit or a lifetime limit, that there are out-of-pocket expenses capped at a maximum level, both annually and for a lifetime.”

The new requirements have prompted some insurers to raise the premiums — dramatically in some cases, according to the The Washington Post — for people who bought bare-bones plans on the individual market.

But Carney noted a minority of consumers find themselves in this position, since “Eighty-plus percent of the American people already get insurance through their employer, through Medicare, or through Medicaid.”

“It’s correct that substandard plans … are no longer allowed because the Affordable Care Act is built on the premise that health care is not a privilege, it’s a right, and there should be minimum standards for the plans available to Americans across the country,” he added.

Yet the NBC report said the government knew that wasn’t true, saying that buried in regulations from the July 2010 law was an estimate that because of normal turnover in the individual insurance market, “40 to 67 percent” of customers will not be able to keep their policy.

And because many policies will have been changed since the key date, “the percentage of individual market policies losing grandfather status in a given year exceeds the 40 to 67 percent range.”

“This says that when they made the promise, they knew half the people in this market outright couldn’t keep what they had and then they wrote the rules so that others couldn’t make it either,” Robert Laszewski of Health Policy and Strategy Associates, told NBC.

He estimated 80 percent of those in the individual market will not be able to keep their current policies and will have to buy insurance that meets requirements of the new law, which generally requires a richer package of benefits than most policies today.

George Schwab, 62, of North Carolina, told NBC he was “perfectly happy” with his plan from Blue Cross Blue Shield, which also insured his wife for a $228 monthly premium. But this past September, he got a letter saying his policy was no longer available.

The “comparable” plan the insurance company offered him carried a $1,208 monthly premium and a $5,500 deductible. And the best option he’s found on the exchange so far offered a 415 percent jump in premium, to $948 a month.

“The deductible is less,” he said, “But the plan doesn’t meet my needs. It’s unaffordable.”

For months, Laszewski has warned that some consumers will face sticker shock — and recently got his own notice that he and his wife can’t keep their current policy, the so-called “Cadillac” plans offered for 2013. The best comparable plan he found for 2014 has a smaller doctor network, larger out-of-pocket costs, and a 66 percent premium increase.

“Mr. President, I like the coverage I have,” Laszweski told NBC. “It is the best health insurance policy you can buy.”