In order for the government to send drones against people they wish to spy on or to attack, they must have GPS-coordinates. Are the people of Boston aware that Lockheed Martin collected their census data?

President Obama authorized the use of drones domestically when he signed FAA Reauthorization Act. They can now be used domestically for a wide range of functions, both public and private, governmental and corporate.  And quite definitely against “domestic terrorists.”

Boston just had domestic terror suspects in their community.  What if the president decided to send drones against terrorist suspects in Boston (or any other city), as it does on a daily basis against suspected terrorists in other countries?

There is nothing in place to stop him.

This much is clear:

In order for the government to send drones against people they wish to spy on or to attack, they must have GPS-coordinates.

Are the people of Boston aware that Lockheed Martin collected their census data?

Lockheed Martin is not only a military contractor but a major producer of GPS systems (led by the Global Positioning Systems Directorate at the U.S. Air Force Space and Missile Systems Center), and drones.

Are they aware that Lockheed Martin trespassed onto their property and that of Americans across the country and GPS-tagged their homes without any permission?

Are they aware this GPS tagging provides the essential coordinates required to kill any Americans via drones?

“Why did the Census Bureau award a $500 Million Dollar Contract to Lockheed Martin Corporation, The Worlds Largest Defense Contractor?”

“In 2004 the United Nations Secretariat published a pdf entitled “United Nations Expert Group Meeting to Review Critical Issues Relevant to the Planning of the 2010 Round of Population and Housing Censuses”. Subtitled “Integration of GPS,Digital Imagery and GIS with Census Mapping” On page 2 it says “4. The census symposium, held in New York in 2001, provided a comprehensive review of the significant capabilities of GPS, Satellite imagery, GIS and handheld computers, and their relevance to census mapping operations. ” This study is about GPS mapping during the census process.

“A Similar pdf  from the UN Dept. of Economic and Social Affairs Statistic Division says that the aim of the meeting was to “set priorities and propose concrete outputs for the development of the 2010 World Population and Housing Census Programme.” The meeting was attended by representatives from 18 countries including the US who was represented by Jay K. Keller, Chief of International Relations, US Census Bureau.

“In July 2006 NPR carried the story, Census Bureau Adopts GPS to Find American Homes, where it states, “Two-and-a-half years from now, in early 2009, the Census Bureau plans to send an army of 100,000 temporary workers down every street and dusty, dirt road in America. They will be armed with handheld GPS devices. Robert LaMacchia, head of the Census Bureau’s geography division, says they’ll capture the latitude and longitude of the front door of every house, apartment and improvised shelter they find. “We will actually knock on doors and look for hidden housing units,” he says. “We will find converted garages; from the outside, it may not look like anybody lives there.”

But census workers will add each dwelling, legal or not, to the Census Bureau’s Master Address File. Recent proposed budget cuts have put part of this plan in jeopardy. But if Congress restores the money, the census will end up with the geographic coordinates — accurate to within 10 feet — for about 110 million residences. “ 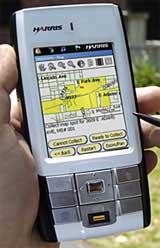 “Several defense contractors were awarded contracts to help carry out this operation in the US. From a $500 Million dollar contract awarded to Lockheed Martin, see link, to HARRIS who supplied the GPS handheld devices used by census workers.”

While Bostonians are facing the astounding shut down of their entire city in martial law fashion because of suspected terrorists (and trying to face the news coming in that the bombing was a CIA operation and a false flag), they must now face the reality that Congress has allowed for drones to be used in the US with no safeguards whatsoever, and the president has the power to order their use to assassinate untried Americans.

What would have been the result to the community if a drone attack had been used to kill the young suspect found hiding unarmed in a boat in someone’s backyard in Watertown?

Continuing from the article “Why Did the Census Bureau …”  Emphasis added.

“The Federal Aviation Administration (FAA) Reauthorization Act facilitates the government use of unmanned spy planes in US airspace and approves deployment of 30,000 by 2020. It also requires the FAA to rush a plan to have as many in the air as possible within 9 months. These drones have been used for spy and assassination missions worldwide.  According to an article in Wikipedia U.S. Air Force (USAF) Chief of Staff General T. Michael Moseley said, “We’ve moved from using UAVs primarily in intelligence, surveillance, and reconnaissance roles before Operation Iraqi Freedom, to a true hunter-killer role with the Reaper.”

“In a report by New Scientist one drone manufactured by Lockheed Martin, one of the contractors used by the census bureau, the RQ-170 Sentinel craft, may have been brought down in Iran by jamming its GPS signal.

“Tying this altogether it seems as though the government has implemented the UN plan to GPS mark all residences and this will make it possible to send in drones instead of personnel when the government chooses thereby removing the human element from the situation. You cannot reason with a drone and it cannot make a judgement that it may be operating on faulty intel. Also, there is the potential for the enemies of this country to crash these drones because of the GPS vulnerability.”

“John W. Whitehead, president of The Rutherford Institute, is calling on Congress to be proactive in adopting safeguards to protect Americans against the domestic use of weaponized surveillance drones.”  In his written testimony to the Senate Judiciary Subcommittee, Whitehead pointed out that there has been no public discussion whatever of the issue – of the dangers or the numerous risks, and “warned against any government use of drones without appropriate civil liberties protections …”

Those includes prohibitions on drones being outfitted with

and against any data recorded by the drones being used in criminal prosecutions.

Rutherford Institute is calling on local, state, and government officials to adopt legislation that would limit domestic use of drones, in an environment in which “at least 30,000 drones are expected to occupy U.S. airspace by 2020.”

“If we have learned one thing from President Obama’s rash use of drones in the United States’ counter-terrorism efforts overseas, it is that this technology is too powerful, too lethal and too indiscriminate for us to allow it to be unleashed on the American populace before any real protocols to protect our safety and privacy rights have been put in place,” said constitutional attorney John W. Whitehead. “We cannot afford to wait until after these drones have been deployed domestically to establish clear guidelines. Such an approach can only end in tragedy.” [Emphasis added.]

The American people have not even begun to consider what it would mean if the government “thought” a “terrorist” was in their neighborhood or even community and used drones.

Previously the question was whether people were willing to give up rights to feel safe from terrorists, but the question now posed by drones is quite literally, are the American people ready to give up their lives and the lives of those dear to them.

Put most plainly, are people willing to be blown to smithereens to stop a suspected terrorist?

Would people in Boston have been?

Would any people in any American city have been?

1.  Why was a private military contractor collecting US census data?

2.  Why were they allowed to trespass on property across the country to take data that had not obtained a legal right to?

3.   Why is the government collecting data that is linked directly to the capacity to send missiles into American homes?

4.  Why was that targeting data sent to the White House?

5..  What would have prevented the president from ordering strikes in Boston under current law or his recent executive orders giving himself the right to assassinate anyone?

It goes without saying that the military contractors making the drones have a vested interest in using them.

Does it also go with saying that the results would, instead, be indistinguishable from war, and with exactly the same military contractors involved.

This could have been Watertown, Massachusetts. Nothing is in place to prevent this from happening. From the UN down, everything has been put in place to allow it.

There is, in fact, no place in the country where it would be “safe” for the government to use drones, “to keep the public safe.”  Nor any place in which it would be sane.

Why is the US involved in obeying UN plans to GPS-tag all American homes?  And why is that simultaneously linked to multinational military drone contractors?