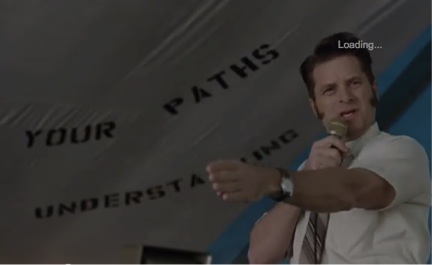 This world is a veil and the face you wear is not your own.
Preacher Joel Theriot, True Detective

Tent preacher Joel Theriot’s full sermon from episode three of True Detective provides a preview and explanation of detective Rust Cohle’s conversion from a laconic nihilist extraordinaire who can barely live with himself to an enlightened soul with some prospect for peace.

In episode 7, Cohle laments his long journey through violence and depravity then says I’m ready to tie it off. Many suspected that this forecast death for Cohle in the final episode. In a very real sense, that theory proved correct but it was a different type of death.

As it turns out, True Detective is the story of a seeker of truth. Rust Cohle’s moment of enlightenment in episode 8 came after years of searching and suffering.

The most elegant and revealing statement of Cohle’s struggle and revelation is, in my opinion, the sermon delivered by Joel Theriot in episode 3, The Locked Room. The seemingly less than sophisticated preacher and an audience of those at the margins of life in rural Louisiana hide the profound message delivered for those willing to listen. Episode 3 shows only a portion of the sermon. The entire sequence is available on YouTube and is well worth watching (several times).

The sermon represent a narrative map for the broader story told throughout the series, which reaches a climax at the end of the season finale. Of note, preacher Theriot is of the evangelical school of Christianity. He both delivers the sermon to and experiences it with the congregation as indicated by their frequent, fervent interaction. There are no strictures, admonitions, or rules; just the presentation of a higher wisdom and path to inner peace available to everyone with ears to hear. Theriot’s sermon is in italics along with my comments.

He saw you in those dark corners. He heard you. Oh brothers, he heard those thoughts.

The question, are you there?

Since the death of his daughter, Cohle has suffered unrelenting guilt for failing to protect her. For years, Cohle has been the only person listening to his thoughts. No one else is there. He is alone without comfort.

And the answer is yes, yes, yes.

Theriot has a forceful answer to the question Are you there? He is and he is with us every moment. But what does he represent. Everything in the scene tells us that he is Jesus. But we don’t hear the name Jesus until four minutes into the six-minute sermon. Cohle and partner Marty Hart are seen at the back of the tent watching Theriot preach. Cohle’s nonchalant attitude, leaning against the tent post is more than disinterest. It represents contempt from the Cohle we know up to this point. (In the final airing of this episode, he says to Marty: What do you think the average IQ of this crew is? I see a propensity for obesity, poverty and fairy tales.)

Your sorrows pin you to this place. They divide you from what your heart knows. … We bandaged our soft selves in hardness and anger. You are a stranger to yourself and yet he knows you. And, when your hard heart made you like unto the stone and broke you from his body – which is the stars and the wind between the stars – he knew you. He knew you yet and forever. Because I ask you, how could a father forget his children?

Cohle became a stranger to himself as a result of hardness and anger due to the death of his daughter. He was so hardened to the world, so profoundly skeptical and alienated, it broke Cohle from his body; separated him from the embrace and protection of the peace surrounding him at the time of his greatest need.

If ever your sorrow becomes such a burden that you forget yourself, forget this world, I want you to remember this truth…

This world is a veil and the face you wear is not your own.

The shape of our face is not yet known to us.

The story of Cohle’s life after the loss of his daughter is the story of sorrow and grief becoming such a burden that Cohle forgot himself and the world. Theriot challenges everyone there, including Cohle, to remember this truth. This world is a veil and we are not ourselves. The shape of our face … not yet known to us is the essence of the message. By using the term yet, Theriot indicates that the veil can be lifted, that we can know ourselves as Cohle realizes at the end of the final episode.

Cohle’s insights shared with Marty mark both his enlightenment and his willingness to join the world through a real relationship with his partner. Cohle talks about descending into the darkness of death as losing my definitions. This prepares him to see the ability to join with his lost daughter as the final words of the sermon promise.

Be in him and of him and then know peace. That is his gift to us, our birthright. In the end, we will find ourselves at the beginning and will at last know ourselves and our true faces will weep in his light; and those tears, those tears will feel like a warm rain. Amen

This further elaborates Cohle’s enlightenment. This is our birthright but realizing it requires profound suffering and trials, in some cases. This was one of those cases.

N.B. For those interested, a similar message appeared nearly two millennia ago:

Jesus said, “Let him who seeks continue seeking until he finds. When he finds, he will become troubled. When he becomes troubled, he will be astonished, and he will rule over the All.” The Gospel of Thomas, Nag Hammadi Library (Trans. T.O. Lambdin)