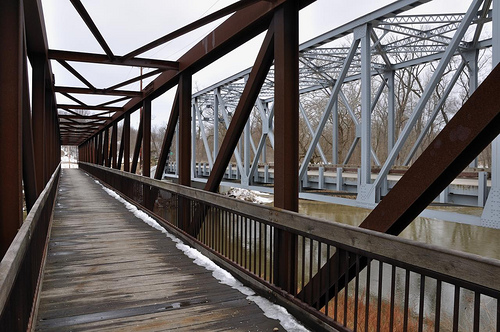 We’re all used to the partisan “Left/Right” convention that is used to factionalize and keep us from talking to each other. Diatribes full of hyperbole pass for political discourse, and listening has become a lost art.  This is bad enough but one subject in particular gets shut out of the conversation when it is dominated by shock and awe: what about Freedom?  Creeping authoritarianism is of greater concern to me than social policy, so it was of great interest when I came upon a sensible dialogue between two writers who approach issues differently but share more than we might expect.

The urge to confront the 800-pound gorilla in the room (creeping government control)  is a sub-text in much of what is written today. With the rise of so many technological tools that invade our privacy, read and record our communications, and provide access that any dictator would drool over- is it almost a no-brainer to assume they will be used against us. If we remain in our cheerleading sections busy despising each other, we’ll miss any opportunity to rein in or control the mechanisms of tyranny now being assembled.

With this in mind, COTO Report has set up this new page, Bridges, for cross-border dialogues. Here we will link specific bridge pieces posted at COTO Report, where full discussion across the political spectrum can be nurtured. The only rules are no ad hominem comments, and stick to the topic.

Thought for the Day: A unionized public employee, a tea party activist and a CEO are sitting at a table with a plate of a dozen cookies in the middle of it. The CEO takes 11 of the cookies, turns to the tea partier and says, “Watch out for that union guy… he wants a piece of your cookie!

Green Tea Anyone?
David Staples, West Cobb Patch (Georgia), August 2013
What began as unlikely allies in an initial effort by the Tea Party and the Sierra Club to defeat the proposed T-SPLOST (Transportation Special Purpose Local Option Sales Tax) has evolved into an unlikely set of allies who are working together to find areas of mutual agreement on energy policy.

Left and Right Together
Dr. Bob Bowman (Nuclear physicist), June 2011
Neither the Progressive Populists nor the Conservative Populists are strong enough to take back the country for the people.  Only if we put our differences aside and work together can we succeed.

What Libertarians and Progressives have in common
PressTV, March 12, 2011
Libertarians know and hate the Federal Reserve. They hate Goldman Sachs and J.P Morgan. But they are not willing to go to the poor people who are being forced to pay for the crimes of those people that they hate because it’s a union or because there may be some Democrats involved in it. Libertarians and progressives can find common ground, but at this point still they are refusing to step back and concede a little bit to find it. They have to come together on campaign finance and lobbying and most importantly they can come together on breaking up the banks.

The First Step to Defeating Tyranny is Solidarity in Alternative Media
Activist Post, Feb. 1,  2011
Most of us come from one side of the false left-right political paradigm, and will probably always have some embedded biases on certain issues.We can all agree that time is running short; we must put aside our differences and find solidarity, as the agenda rapidly progresses and the control grid closes in on all of us. In other words: respectful debate is constructive; divisive argument is not.

Left and Right Together
By Robert M. Bowman, June 2010
There is no longer Republican nor Democrat, conservative nor liberal, left nor right.  There are only we Patriots speaking truth to power and taking back our country for the people.

Renaissance 2.0
March 2010
The Council on Renewal presents six topics in 12 videos on the New World Order, which essentially began with the 1913 creation of the Federal Reserve Bank. (2010, 106 mins) 1. Rise of Financial Power; 2 Debt: Imperial Power and Control; 3. Ownership; 4. Culture of Empire (in four parts); 5. Emerging Global Empire (in two parts); and 6. Brightening the Future (in three parts).

On the racism and pathology of left progressive First-World activism
August 4, 2010
Analyzing social justice movements that seek to overthrow the exploitative hierarchy, Denis Rancourt explores the pathological resistance to real change and shows how libertarians are closer than either the left or the right toward achieving individual sovereignty.

A Bipartisan Coalition Against the EPA
June 11, 2010
To the delight of teapartiers and progressives, six Democrats joined 41 Republicans in supporting the Murkowski Resolution, which sought to limit the EPA’s power in the cap and trade scheme.  The Senate passed the resolution anyway, 53-47.