Selling the public on teratogenic wars: ‘deceptions2’ a lesson in war propaganda

Under 30 minutes, deceptions 2 is Chris Pratt’s follow-up to his popular full-length documentary from 2010 (reviewed here). D2 focuses on the use of public relations firms to manipulate the public into supporting foreign wars of aggression.

But these aren’t ordinary wars, where industry sends armies into the bush to slaughter natives to seize their lands. Instead, now the US and its allies are poisoning the lands they invade, using depleted uranium and caustic chemicals, and generating an epidemic of birth defects.

END_OF_DOCUMENT_TOKEN_TO_BE_REPLACED

Iraq vet Ross Caputi’s film opens with a fleeting synopsis of the American heartbreak — and the bandage we tape across it.

His documentary, Fear Not the Path of Truth, is about the U.S. devastation of Fallujah, in which he participated as part of Operation Phantom Fury in November 2004, but the first couple minutes give us an overview of his hometown, the “former industrial city” of Fitchburg, Mass.:
END_OF_DOCUMENT_TOKEN_TO_BE_REPLACED

Inconsistencies and Unanswered Questions: The Risks of Trusting the Snowden Story

Last June, Glenn Greenwald at The Guardian revealed that Edward Snowden was the NSA insider behind “one of the most significant leaks in US political history.” Snowden explained his motivations through Greenwald by saying, “There are more important things than money…. harming people isn’t my goal. Transparency is.”

Such altruistic motivations were welcome news at the time but have come into question recently given that only a tiny fraction of the documents have been released nearly a year after Snowden started working with Greenwald. Perhaps more importantly, billionaire Pierre Omidyar is funding Greenwald’s slow release of those documents. It is worth noting that Omidyar’s Paypal Corporation has links to the NSA.

END_OF_DOCUMENT_TOKEN_TO_BE_REPLACED

In this blockbuster no-holds-barred conversation, Sibel Edmonds, Guillermo Jimenez and James Corbett discuss Edmonds’ recent series of articles on Glenn Greenwald and his connection to billionaire Pierre Omidyar. We talk about the NSA/PayPal connection and Greenwald’s refusal to discuss this issue, and Edmonds reveals specific examples of publicly documented cases that Greenwald has been covering up for years: LISTEN HERE: http://www.corbettreport.com/mp4/bfpr02.mp4

The NSA Whistleblowing Case: Something is Awfully Rotten in the State of …?Imagine a major government whistleblower who leaks his evidence and obtained documents to the highest bidders in the mainstream media and mega corporations. Does that sound awful, disgraceful and despicable? Okay. Now, imagine a pseudo journalist who obtains over 50,000 documents from a government whistleblower, and then takes some of this information and puts it out for bid, reserves a certain portion for a lucrative book deal, and saves the rest for a mega corporation that has a record of screwing whistleblowers. How does that sound? This is what I mean by the title of this commentary: Checkbook Journalism & Leaking to the Highest Bidders.

END_OF_DOCUMENT_TOKEN_TO_BE_REPLACED

Barack Obama did not tell the whole story this autumn when he tried to make the case that Bashar al-Assad was responsible for the chemical weapons attack near Damascus on 21 August. In some instances, he omitted important intelligence, and in others he presented assumptions as facts. Most significant, he failed to acknowledge something known to the US intelligence community: that the Syrian army is not the only party in the country’s civil war with access to sarin, the nerve agent that a UN study concluded – without assessing responsibility – had been used in the rocket attack.

END_OF_DOCUMENT_TOKEN_TO_BE_REPLACED

In order for the government to send drones against people they wish to spy on or to attack, they must have GPS-coordinates. Are the people of Boston aware that Lockheed Martin collected their census data?

President Obama authorized the use of drones domestically when he signed FAA Reauthorization Act. They can now be used domestically for a wide range of functions, both public and private, governmental and corporate.  And quite definitely against “domestic terrorists.”

END_OF_DOCUMENT_TOKEN_TO_BE_REPLACED

She’s at it again, one of my favorite alternative media researchers…

END_OF_DOCUMENT_TOKEN_TO_BE_REPLACED

Stopping a War Before It Starts 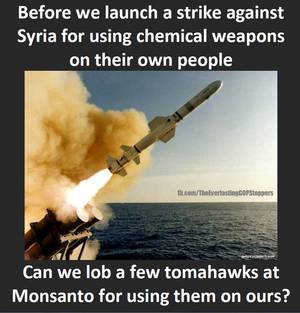 Who’s up for stopping a war?

This is the time, as the next war strains to be born, amid the same old lies as last time, amid the same urgency and pseudo-debate and pretensions of seriousness:

The government of Syria has crossed a “red line.” It has used poison gas, killing hundreds of innocent people and committing a heinous war crime. And suddenly, clear as a bell, we have good vs. evil. Our only course of action, President Obama and his spokespersons tell us, is to “carry out a punitive strike against the Syrian government.”

END_OF_DOCUMENT_TOKEN_TO_BE_REPLACED

Greeks reject US doublespeak on chemtrails and climate change

Wayne Hall, a Greece chemtrail activist, takes a look at how the US steers the discussion of climate change and geoengineering in this 15-minute video:

END_OF_DOCUMENT_TOKEN_TO_BE_REPLACED

The Protagonists of the “Global War on Terrorism” are the Terrorists

The following video features Hillary Clinton candidly acknowledging that America created and funded Al Qaeda as a terrorist organization in the heyday of the Soviet-Afghan war.

What she does not mention is that at no time in the course of the last 30 years has the US ceased to support and finance Al Qaeda as a means to destabilizing sovereign countries.

END_OF_DOCUMENT_TOKEN_TO_BE_REPLACED

Failures to Confront the Unspeakable, and The Way Ahead. Part I

In the last 50 years there have been two major threats to life on our planet. The first, the nuclear arms race and its near disaster of 1962, was narrowly averted by President John F. Kennedy and his brother Robert Kennedy, who then set a course for peace.

END_OF_DOCUMENT_TOKEN_TO_BE_REPLACED

The Moral Equivalent of Nuremberg

My favorite quote was from the British government spokesperson, who assured us: “All ammunition used by UK armed forces falls within international humanitarian law and is consistent with the Geneva Convention.”

Tears come to my eyes as I think about the kindness of coalition bullets, the empathy of coalition bombs — unlike, I’m certain, the ammo used by terrorists, which is cruel, which hates our way of life and wants only to destroy it.

Forgive me the sarcasm. Another study has come out, this one underwritten by the Department of Obstetrics and Gynecology at the University of Michigan, linking the U.S.-British war in Iraq with a hideous, heartbreaking and “staggering” increase in birth defects in areas of the country where bombing and heavy fighting occurred.

END_OF_DOCUMENT_TOKEN_TO_BE_REPLACED

On my new radio show, Playing for Keeps, my co-hosts Adam Ericksen, Suzanne Ross and I will have the pleasure of interviewing global peace activist and Nobel Peace Prize nominee Kathy Kelly. The show will be on Monday, May 21, at 11 a.m. Central time.

NATO is visiting Chicago next week and so are nonviolent protestors from around the globe. While the NATO powers are in town, we are delighted to bring you two-time Nobel Peace Prize nominee Kathy Kelly, who has been speaking truth to power for decades. Kathy is the coordinator of Voices for Creative Nonviolence and has witnessed for peace in Gaza, Afghanistan, and Iraq.

END_OF_DOCUMENT_TOKEN_TO_BE_REPLACED

Al-Qaeda manipulated the US into putting sanctions on Yemen

The US is moving to place sanctions on anyone who opposes what Washington calls a democratic process in Yemen. Anti-war activist Susan Lindauer says this brings the US right into Al-Qaeda’s trap.

­Yemen is fighting an alleged Al-Qaeda insurgency with military support from the United States. On top of this, the Arab state continues to suffer from months of political unrest, with anti-government protesters demanding more reforms.

END_OF_DOCUMENT_TOKEN_TO_BE_REPLACED

May the Fourth Be With You

I first began my journey to understand Kent State as a result of a woman who confided in me regarding her husband’s wartime PTSD. She was at that time working with Alan Canfora on his life-long project to bring the Kent State Massacre back into the national spotlight. For Alan and his friends who were either maimed, wounded like him, or slaughtered, justice has yet to be served for the heinous offenses of May 4, 1970. END_OF_DOCUMENT_TOKEN_TO_BE_REPLACED

Who Was Osama? Who Is Obama?

By Michel Chossudovsky
Global Research, May 2, 2012

While the President and Commander in Chief of the United States of America, Barack Hussein Obama “celebrates” the first anniversary of the alleged death of bin Laden, the substantive issue as to WHO WAS OSAMA BIN LADEN remains unheralded. (Remarks by President Obama in Address to the Nation from Bagram Air Base, Afghanistan, see video at foot of article)

Through lies and fabrications, president Obama`s carefully scripted speech upholds a world of total fantasy, in which “bad guys” are lurking and “plotting acts of terror” Islamic “jihadists” are said to be threatening Western civilization.

Each and every statement in Obama’s May 1st speech at Bagram Air Force base regarding the role of Al Qaeda is a fabrication:

END_OF_DOCUMENT_TOKEN_TO_BE_REPLACED

Growing up, falling in love

The AP story on military maneuvers in the Arctic reads like the gleeful report of a mugging.

“To the world’s military leaders, the debate over climate change is long over. They are preparing for a new kind of Cold War in the Arctic, anticipating that rising temperatures there will open up a treasure trove of resources, long-dreamed-of sea lanes and a slew of potential conflicts.”

Wow, what fun — a new playground, with maybe 90 billion barrels waiting for corporate exploitation beneath the melting ice cap, 30 percent of the world’s untapped natural gas, and all sorts of minerals, diamonds, gold, copper, zinc and so much more. And the world’s armed forces get to play war games. Boys will be boys!

END_OF_DOCUMENT_TOKEN_TO_BE_REPLACED

In January 2012, “Deva” took a camera phone picture of herself, picking up her TV in the background which was set to the news.  The camera captured the backward spelling of KILL, undoubtedly a subliminal message deliberately blasted to the masses still caught in TV land.

END_OF_DOCUMENT_TOKEN_TO_BE_REPLACED

By Brian A. Burchill
Global Research

The UK’s Guardian recently interviewed “current and former U.S. and European officials with access to intelligence on Iran,” and concluded that the United States, its European allies, and even Israel, agree that Tehran is probably years away from having a deliverable nuclear warhead.1

END_OF_DOCUMENT_TOKEN_TO_BE_REPLACED

The “Honorable Michael B. Mukasey?”  At this juncture I could express shock,

disbelief and horror at such a thought after reading former FBI Special Agent Colleen Rowley’s article available via Information Clearinghouse and also at the Huffington Post.  But I won’t.

Rowley takes exception that such a relic from the Bush Administration could be called upon by any academic institution, let alone one involved in the training of professional attorneys, to speak on the subject of ethics and the implementation of unethical, often illegal, policies. END_OF_DOCUMENT_TOKEN_TO_BE_REPLACED