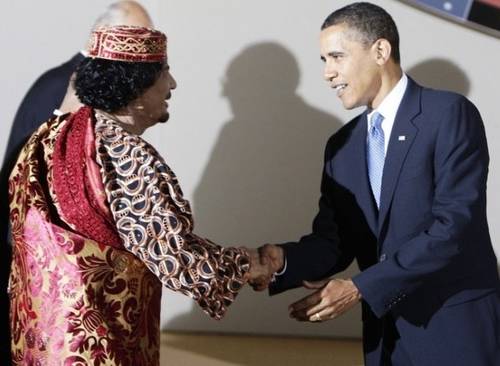 In 2011 when Muhammar Qaddafi refused to leave quietly as ruler of Libya, the Obama Administration, hiding behind the skirts of the French, launched a ferocious bombing campaign and a “No Fly” zone over the country to aid the so-called fighters for democracy.

The US lied to Russia and China with help of the (US-friendly) Gulf Cooperation Council about the Security Council Resolution on Libya and used it to illegally justify the war. The doctrine, “responsibility to protect” was used instead, the same doctrine Obama wants to use in Syria. It’s useful top look at Libya two years after the NATO humanitarian intervention.

END_OF_DOCUMENT_TOKEN_TO_BE_REPLACED

The Obama Administration is a ‘State Sponsor of Terrorism’

A major transition in US counter-terrorism doctrine is unfolding. While Barack Obama, following in the footsteps of  George W. Bush, remains firmly committed to waging a “Global War on Terrorism” (GWOT), his administration is now openly supporting selected rebel units in Syria which are part of the Al Qaeda network.

Known and documented, Al Qaeda is a creation of the CIA, which has covertly supported the “Islamic Terror Network” since the heyday of the Soviet Afghan war.  While Al Qaeda is a US sponsored “intelligence asset”, a “New Normal” has been established.

END_OF_DOCUMENT_TOKEN_TO_BE_REPLACED 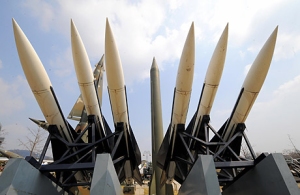 The connections between the foreign intervention crisis in Syria, the vast NSA surveillance program that has recently been exposed, and the sequence of events that began with NSA program changes in February, 2001 — six months before 9/11 — are illuminating.

In mid June 2013 the Obama administration announced that it will start arming insurgents against the Syrian government because the regime crossed a “red line” by using chemical weapons — which it estimates have killed, over time, an estimated 100-150 rebels.[1]

END_OF_DOCUMENT_TOKEN_TO_BE_REPLACED

Al-Qaeda manipulated the US into putting sanctions on Yemen 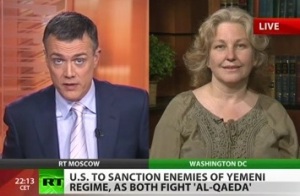 The US is moving to place sanctions on anyone who opposes what Washington calls a democratic process in Yemen. Anti-war activist Susan Lindauer says this brings the US right into Al-Qaeda’s trap.

­Yemen is fighting an alleged Al-Qaeda insurgency with military support from the United States. On top of this, the Arab state continues to suffer from months of political unrest, with anti-government protesters demanding more reforms.

END_OF_DOCUMENT_TOKEN_TO_BE_REPLACED

Who Was Osama? Who Is Obama?

By Michel Chossudovsky
Global Research, May 2, 2012

While the President and Commander in Chief of the United States of America, Barack Hussein Obama “celebrates” the first anniversary of the alleged death of bin Laden, the substantive issue as to WHO WAS OSAMA BIN LADEN remains unheralded. (Remarks by President Obama in Address to the Nation from Bagram Air Base, Afghanistan, see video at foot of article)

Through lies and fabrications, president Obama`s carefully scripted speech upholds a world of total fantasy, in which “bad guys” are lurking and “plotting acts of terror” Islamic “jihadists” are said to be threatening Western civilization.

Each and every statement in Obama’s May 1st speech at Bagram Air Force base regarding the role of Al Qaeda is a fabrication:

END_OF_DOCUMENT_TOKEN_TO_BE_REPLACED

War crimes in Libya and the March shift

Foreign Policy just published a roundup of weapons contributed to the Libyan rebels in the regime change effort. The e-Journal is a publication of the Washington Post. Colum Lynch’s April 4 article relies on the March 20 UN report to the UN Security Council by a panel of experts appointed to track the UN resolutions and responses from the start of the conflict.

These two paragraphs, noncontroversial in establishment world, outline clear violations of Principle VI (a), (b), and (c), of the Nuremburg Principles, affirmed by the United Nations General Assembly.

“With military supplies, training, advice — and of course the backing of NATO war planes — this coalition of governments provided critical support to change the course of the conflict, ultimately leading to Qaddafi’s downfall. ” Colum Lynch, Foreign Policy, March 4

It’s right there. The rebels were getting their clock cleaned by the legal government of Libya. The UN Security Council approved a humanitarian mission run by NATO to protect Libyan civilians based almost exclusively on evidence from one questionable source, an activist who was part of the Libyan rebels group. END_OF_DOCUMENT_TOKEN_TO_BE_REPLACED 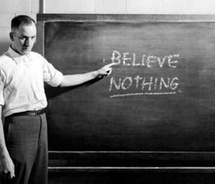 You know, don’t you, that you have to invite vampires into your home or they are not capable of entering, or better, they are forbidden to enter by some kind of law that governs the undead.  (It’s important to have rules in the necromantic realms as it shows that there is order in all of God’s creations, even the evil ones.)

I was put in mind of this “rule” when I read the “School Diary” column in yesterday’s local paper.  It was penned by a Bloomington South High School student and was headlined, “School diary: Rights of life, liberty, pursuit of happiness are far from universal.“  It’s nice to see we learn the proper way to start a piece of propaganda in our high schools.

END_OF_DOCUMENT_TOKEN_TO_BE_REPLACED

‘Human Rights’ Groups and the Pretext for War in Syria

The Arab League has announced it’s reached a deal with Syria on easing the country’s long-running political crisis. The agreement urges Damascus to immediately withdraw security forces from the streets, release jailed demonstrators, and start dialogue with the opposition. Syria also agreed to allow rights groups and Arab League watchdogs into the country. But the U.S. still says it wants to see President Assad resign.

END_OF_DOCUMENT_TOKEN_TO_BE_REPLACED 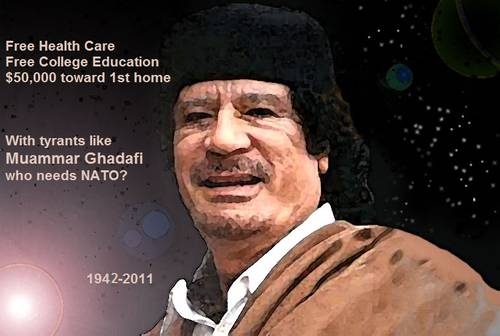 It doesn’t matter to them if it’s untrue. It’s a higher truth.

“We came, we saw, he died.” — US Secretary of State, Hillary Clinton, giggling, as she spoke of the depraved murder of Moammar Gaddafi

Clinton and her partners-in-crime in NATO can also have a good laugh at how they deceived the world.

END_OF_DOCUMENT_TOKEN_TO_BE_REPLACED

The Murder of Muammar Gaddafi

The International Criminal Court is due to receive a suit against NATO over the killing of Libyan ex-leader Muammar Gaddafi. But the Gaddafi family’s chances of finding justice in The Hague are all too slim, says journalist James Corbett.

In their suit, which cites the “deliberate killing” of a person protected by the Geneva Convention, Gaddafi’s family will target NATO’s executive bodies and the leaders of its member states, their lawyer, Marcel Ceccaldi, said on Wednesday.

END_OF_DOCUMENT_TOKEN_TO_BE_REPLACED

By Franklin Lamb
The Peoples Voice

The people I had hoped most to be able to find upon returning to Libya were eight students from Fatah University (now renamed Tripoli University) who became my friends during three months in Libya this summer. They had all been strongly opposed to what NATO was doing to their country (NATO bombs destroyed some classrooms at the University during final exams in late May) and I was very keen to sit with them again if possible since the August 23rd fall of Tripoli when most of them scattered given the uncertainties of what would happen and we lost contact.

Thanks to Ahmad who was waiting for me we re-united quickly. Some excerpts and impressions from yesterday’s all night gathering with Ahmad, Amal, Hind, Suha, Mohammad and Rana:

“I know Sanad al-Ureibi”, Ahmad said disgustedly about the 22 year old who is claiming he fired two bullets at close range into Muammar Gadhafi on October 22nd.

END_OF_DOCUMENT_TOKEN_TO_BE_REPLACED

This morning I had a chance to interview award-winning writer, Prof. Michel Chossudovsky about the Occupy Wall Street movement.

Michel Chossudovsky is the President and Director of the Centre for Research on Globalization (CRG). He teaches Economics at the University of Ottawa and his books have been translated into over 20 languages.

Go to globalresearch.ca for more information.

END_OF_DOCUMENT_TOKEN_TO_BE_REPLACED

The Son of Africa claims a continent’s crown jewels 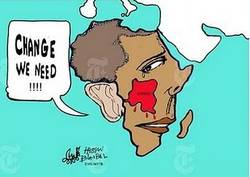 On 14 October, President Barack Obama announced he was sending United States special forces troops to Uganda to join the civil war there. In the next few months, US combat troops will be sent to South Sudan, Congo and Central African Republic. They will only “engage” for “self-defence”, says Obama, satirically. With Libya secured, an American invasion of the African continent is under way.

Obama’s decision is described in the press as “highly unusual” and “surprising”, even “weird”. It is none of these things. It is the logic of American foreign policy since 1945.

END_OF_DOCUMENT_TOKEN_TO_BE_REPLACED

First, we’ll show the section on Libya, then followed by the entire film

END_OF_DOCUMENT_TOKEN_TO_BE_REPLACED

At face value, the tenuous narrative of a struggling, desperate NATO confounded by months of fierce resistance on all fronts and an increasingly brutal and transparently atrocious proxy army on the ground in Libya, suddenly wringing victory from what was essentially a catastrophic failure, is difficult to believe. This, especially as NATO desperately needs to turn its full attention toward Syria as the window of its imperial ambitions quickly closes forever. Already, claims that Muammar Qaddafi’s son Saif al-Islam had been captured have turned out to be admittedly false, Reuters finally admits [1], even after an elaborate tale had already begun spreading through the biased, irresponsible corporate-driven Western media. 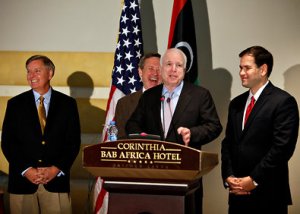 Photo: It’s all smiles and laughs in Tripoli as McCain, a chief proponent and driving force behind the US intervention in Libya, literally glorifies Al Qaeda’s exploits in the now ruined nation. Miles away, the very rebels he was praising were purposefully starving the civilian population of Sirte in an effort to break their will, while they and NATO indiscriminately used heavy weapons aimed at crowded city centers.

END_OF_DOCUMENT_TOKEN_TO_BE_REPLACED 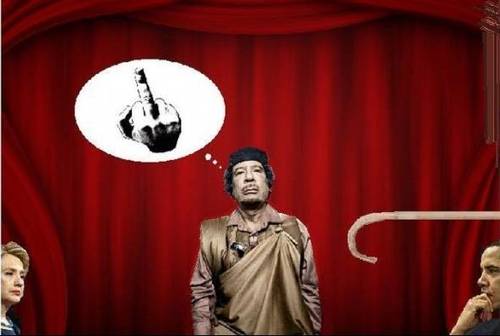 Dy Yusuf Shakeer, Libyan most famous journalist says that the Libyan leader Muammar Gaddafi is alive. So far, Shaker has not said a single lie, reason why the Libyans listened to him before the NATO bombed its TV channel to silence him.

“I’ve heard enough for today. Enough insults to our intelligence by saying that the Libyans now we are free… We had never lived under siege, killed, persecuted, imprisoned and in this destruction. The only death that I will celebrate will be the one of Zionism and imperialism.”

Muammar to Ghadafi is alive and leading the Libyan resistance.

END_OF_DOCUMENT_TOKEN_TO_BE_REPLACED

7 pm UPDATE:  Others doubt NATO killed Gadhafi:
Gaddafi is not dead! His son is not dead! Sirte is still under control of Green resistance!

InfoWars: Do You Believe al-Qaeda’s Claim Gaddafi is Dead?

END_OF_DOCUMENT_TOKEN_TO_BE_REPLACED 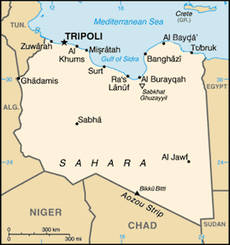 The situation in Sirte is dire.  Six weeks under siege after months of aerial attacks.  Children and old people dead of hunger and thirst. Water supply hit. Hospitals without medical supplies to treat the ill and injured, and then bombed by NATO. The dead lying in the streets.

In their missile-launcher-laden graffiti-decorated pick-up trucks, the rebels drive into the city edges in the morn and back out by dark, hailed as ‘freedom-fighters’ by their embedded foreign press, they more resemble armed gangs.

END_OF_DOCUMENT_TOKEN_TO_BE_REPLACED

Libyan resistance to NATO invasion grows: Updates from the Front

Roundup of news from za-kaddafi.ru and other independent sources, including that Libyans took out a US paratrooper plane.

Today, Dr. Christof Lehmann, of NSNBC (No Spin News By Christof Lehmann), revealed some very interesting news.  Incidentally, Dr. Leymann’s NSNBC has become well-known for its accuracy in reporting the situation on the ground in Libya.  He says:

“According to reliable sources, a series of secret meetings between tribal leaders from Zintan, Libya and Algeria resulted tonight in an agreement that a unified front of tribal militia will enter the war which they call “The War for the Liberation of Northern Africa”. According to the same sources this alliance of tribes is backed by a unified North African Front, including Moroccan Tribes as well as Polisario who is fighting against the Moroccan administration of the Sahrawi Arab Democratic Republic.

END_OF_DOCUMENT_TOKEN_TO_BE_REPLACED 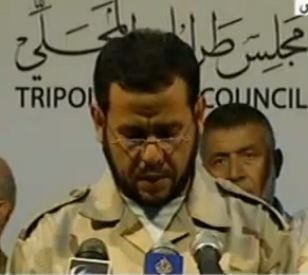 By Christof Lehmann
No Spin News

Oct. 4, 2011  Yesterday NATO and Transitional National Council mercenaries initiated the heaviest assault yet on the strategically and economically important city of Sirte, advancing into the suburbs of the city. After heavy fighting, the attack was ground to a halt this morning.  Though heavy fighting continued in other cities, the fronts were relatively calm, which indicates that the TNC is running low on reserves. Is the all-out assault a desperate attempt to register one victory before the NATO Meeting in two days?