Your Government on War 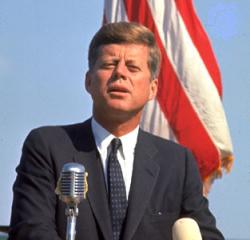 “Our primary long range interest in Geneva, however, is general and complete disarmament, designed to take place by stages, permitting parallel political developments to build the new institutions of peace which would take the place of arms. . . . While we proceed to safeguard our national interests, let us also safeguard human interests. And the elimination of war and arms is clearly in the interest of both.”

That was President John F. Kennedy speaking to the 1963 graduating class of American University —announcing that the human race was ready to move beyond war. This was the speech in which he revealed that talks on a Nuclear Test-Ban Treaty with the Soviet Union had begun, and that the U.S. was unilaterally suspending atmospheric nuclear testing.

END_OF_DOCUMENT_TOKEN_TO_BE_REPLACED

Posted in Constitution, War and Peace