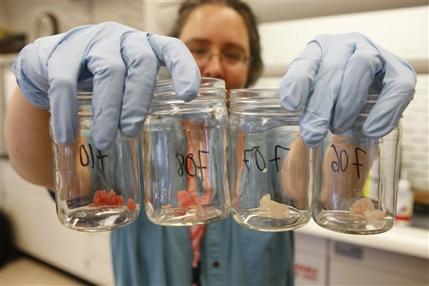 Washington Post reports: “Ten products, including fish, shrimp, oysters, crab cakes, and packaged Cajun dishes such as jambalaya and shrimp etouffee are being promoted at 72 base commissaries along the East Coast, said Milt Ackerman, president of Military Solutions Inc., which is supplying seafood to the businesses.”

Of course, the military-industrial complex doesn’t want anyone to think about the thousands of fish, birds and other wildlife along the Gulf Stream that have showed up dead in the past several weeks, likely from the dispersants that failed to degrade, if not the oil itself which is showing up in humans.

END_OF_DOCUMENT_TOKEN_TO_BE_REPLACED

Corexit? Phosgene gas? What Else? Now over 30 mass kills around the globe

WTF is happening? Are some of these mass die-offs a result of Corexit sprayed in the Gulf of Mexico last year and now making its way up the coast and over to England? Corexit can’t explain all the mass die-offs. We have one report from Russian intelligence that Phosgene Gas was sprayed in Arkansas, resulting in those die-offs. But what about New Zealand? And Ontario? Have the psychopaths gone on a murderous rampage around the globe?

END_OF_DOCUMENT_TOKEN_TO_BE_REPLACED

Fracking the life out of Arkansas and beyond

(Updated below.) The last four months of 2010, nearly 500 earthquakes rattled Guy, Arkansas. [1] The entire state experienced 38 quakes in 2009. [2] The spike in quake frequency precedes and coincides with the 100,000 dead fish on a 20-mile stretch of the Arkansas River that included Roseville Township on December 30. The next night, 5,000 red-winged blackbirds and starlings dropped dead out of the sky in Beebe. [3] Hydraulic fracturing is the most likely culprit for all three events, as it causes earthquakes with a resultant release of toxins into the environment. [4]

END_OF_DOCUMENT_TOKEN_TO_BE_REPLACED 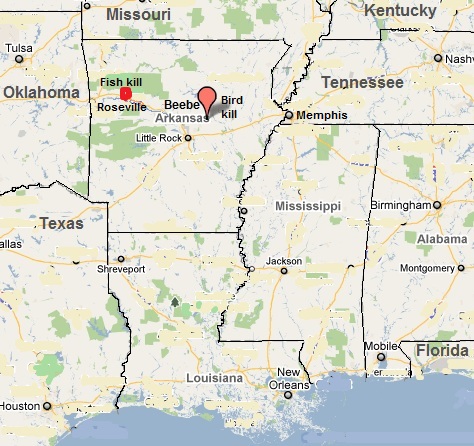 Jan 6. UPDATE: Fracking the life out of Arkansas and beyond