Among several “chemicals of concern” recently removed from a list of proposed regulations by the Environmental Protection Agency, Bisphenol A, a neurotoxin and endocrine disruptor that also damages DNA, has been banned in several other nations and in eleven US states.

BPA is used in making plastics from bottles to food packaging, and in thermal receipt paper. It’s found on paper money, and in epoxy resin used in food cans and textiles. Though BPA penetrates nearly half of all food stuffs, several more toxic bisphenols, like BPS, reports GreenMedInfo, also invade the food supply.

END_OF_DOCUMENT_TOKEN_TO_BE_REPLACED

Last week, the University of Missouri announced a new method to detect silver nanoparticles in fresh produce and other food products. Though not mentioned by researchers, it’s conceivable that the protocol could be modified to test for chemtrail dispersants, as well, since the particles dispersed are in the nano size range, measured in billionths of a meter.

Over 200 agricultural pesticides contain nanosilver, which studies have shown to be toxic to humans, under certain conditions. Over 1,600 consumer products are known to contain nanoparticles, ranging from clothes to cleaning agents, to food, cosmetics, and drugs; but with no regulatory requirement to disclose, the real number is likely far higher by orders of magnitude.

END_OF_DOCUMENT_TOKEN_TO_BE_REPLACED

Thyroid cancer cases have more than doubled since 1997 in the U.S., while deadly industrial practices that contaminate groundwater with radiation and other carcinogens are also rising.

New information released by the U.S. National Cancer Institute (NCI) estimates that 56,460 people will develop thyroid cancer in 2012 and 1,780 will die from it.

END_OF_DOCUMENT_TOKEN_TO_BE_REPLACED

The first ever lawsuit concerning risks of nanotechnology was filed in federal court last month when several groups jointly sued the US Food and Drug Administration for its lack of response to a 2006 petition demanding that products with nanomaterials be labeled and their affects tested for safety. [Image]

END_OF_DOCUMENT_TOKEN_TO_BE_REPLACED

The Gulf of Mexico disaster has not gone away.  In fact, it has grown exponentially since the main stream media stopped talking about it. According to the Gulf Rescue Alliance, an organization composed of scientists, medical professionals and seafood industry professionals, among others, the problem cannot be simplified to the damage already caused by the oil spill. It is worse, much worse.

The Real Agenda received exclusive information regarding the current state of the ongoing emergency in the Gulf of Mexico.

END_OF_DOCUMENT_TOKEN_TO_BE_REPLACED

Five of the 57 ingredients in dispersants approved by the U.S. Environmental Protection Agency for use on oil spills are linked to cancer, finds a new research report based on data obtained through a Freedom of Information Act request by environmental groups on the Gulf of Mexico.

The report from Earthjustice, an environmental law firm, along with Toxipedia Consulting Services, is based on material released by the U.S. EPA in response to a Freedom of Information Act request made by Earthjustice on behalf of the Gulf Restoration Network and the Florida Wildlife Federation.

END_OF_DOCUMENT_TOKEN_TO_BE_REPLACED 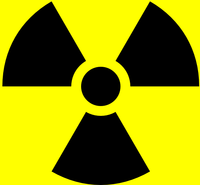 In 1992, the EPA produced Protective Action Guides to enforce the law following any incident involving the release of radioactive material. According to documents obtained by PEER.org, here is what the EPA is planning to change:

END_OF_DOCUMENT_TOKEN_TO_BE_REPLACED

The New York Times reveals that the U.S. Environmental Protection Agency has known since at least 2009 that hydrofracking (to increase oil and gas extraction) is contaminating US waters with radioactive waste. Josh Fox’s film “Gasland” didn’t win the Oscar for Best Documentary, despite that most Americans know all about “Inside Job” and the criminal banksters and their government protectors, but few know about the dangers of fracking and how regulators protect driller profits over human and environmental health.

In this first in a series, the NYTimes fails to mention Arkansas, the meteoric rise in earthquakes associated with fracking, and the livestock and mass wildlife deaths.  Maybe it’ll get to the rest of this fracking mess.  As is, tho, it’s still worth the read. ~ Ed.
END_OF_DOCUMENT_TOKEN_TO_BE_REPLACED

Fracking the life out of Arkansas and beyond 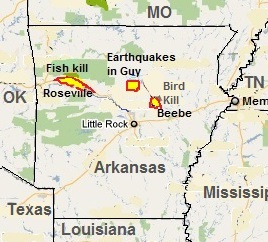 (Updated below.) The last four months of 2010, nearly 500 earthquakes rattled Guy, Arkansas. [1] The entire state experienced 38 quakes in 2009. [2] The spike in quake frequency precedes and coincides with the 100,000 dead fish on a 20-mile stretch of the Arkansas River that included Roseville Township on December 30. The next night, 5,000 red-winged blackbirds and starlings dropped dead out of the sky in Beebe. [3] Hydraulic fracturing is the most likely culprit for all three events, as it causes earthquakes with a resultant release of toxins into the environment. [4]

END_OF_DOCUMENT_TOKEN_TO_BE_REPLACED

The Case Against Fluoride: Toxifying the Tap

In July of this year, the United Nations declared access to clean water a human right. The United States was among 41 nations that abstained from supporting the resolution. Since October 15th is Blog for Water Day, a close inspection of a common US practice – fluoridating city water supplies – is in order.

The subject of water fluoridation has been controversial for decades, but a new book, The Case Against Fluoride, won the accolades of a Nobel Laureate:

END_OF_DOCUMENT_TOKEN_TO_BE_REPLACED

ORANGE BEACH, Ala. — Wherever disaster strikes, there’s always an associated crud. There was the Exxon Valdez Crud. The Nine Eleven Crud. The Katrina Cough, and then the TVA coal ash cough. Now, along the entire coast of the Gulf of Mexico, there is the BP Crud, afflicting workers and the general population from Louisiana to Florida.

END_OF_DOCUMENT_TOKEN_TO_BE_REPLACED

By Paul Napoli
The Injury Board

A new study has identified 39 additional coal ash dumpsites in 21 states that are contaminating water supplies with heavy metals, showing the government is inadequately monitoring these disposal sites and lax at regulating the toxic waste. The study is entitled IN HARM’S WAY: Lack of Federal Coal Ash Regulations Endangers Americans and Their Environment and was released just days before the U.S. Environmental Protection Agency (EPA) starts a series of hearings across the U.S. to consider regulation of toxic coal ash waste.

END_OF_DOCUMENT_TOKEN_TO_BE_REPLACED

Areas of the Gulf of Mexico reopened to fishing still show oil and dispersants, according to local fishermen and independent journalist Dahr Jamail. Witnesses report that BP’s contractors are still spraying surface oil with dispersants. With Obama assuring us that Gulf seafood is safe to eat (despite this JAMA report to the contrary), Gulf Coast residents have to wonder if we are not under attack by our own government and the oil barons it serves. ~ Ed.

END_OF_DOCUMENT_TOKEN_TO_BE_REPLACED

Corporate criminals and their accomplices: BP and MMS

Jeffrey St. Clair is co-editor with Alexander Cockburn of the muckracking Web site and newsletter CounterPunch–where he has written extensively on BP’s Gulf catastrophe and other environmental issues. At the Socialism 2010 conference in San Francisco, he described the conveyor belt between the executive suites of energy companies and the offices of government agencies that regulate them–and how this incestuous relationship set the stage for the BP disaster.

END_OF_DOCUMENT_TOKEN_TO_BE_REPLACED

In Drinking Water, What’s Legal Can Be Poisonous 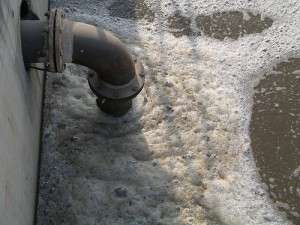 In another of The New York Times’ startling articles on the state of U.S. waters, Charles Duhigg reports on the myriad chemicals polluting drinking water supplies and regulators’ inability to manage them.