Totalitarianism in the US: An Accident Waiting to Happen

By Numerian
First appeared in The Agonist

Listening to Paul Ryan’s speech at the Republican National Convention, I couldn’t place where I had come across something quite like this before. Then it struck me – Pravda! I used to subscribe to Pravda in high school and college, first to learn Russian, and second, to pursue a college program in Soviet studies. Pravda was a newspaper that specialized in the Big Lie – the Five Year Plan was always ahead of schedule, Soviet industrial capabilities exceeded that of any other country, people were starving on streets all across America. The newspaper was a non-stop stream of lies, just as Paul Ryan’s speech was studded with Big Lies – lies that were easily disprovable, such as Barack Obama did nothing about the Simpson-Bowles recommendations to reduce the budget deficit (Paul Ryan didn’t mention he voted against these recommendations when the House killed any chance of enacting them); or that Obama made it easier for people to live off welfare (the President altered the enrollment rules of welfare at the request of Republican governors); or the Romney favorite – Obama cut over $700 billion of Medicare benefits for individuals (the cuts were imposed on hospitals and insurance companies, not beneficiaries, and Romney has the same cuts in his economic plan). (Image: Wikipedia) END_OF_DOCUMENT_TOKEN_TO_BE_REPLACED

“The problems we are facing were not created by us, but we deign to shed light on them and so we are blamed for them. The truth is, every person at our protest is there because the system is broken.” Samuel Rutledge, Open Newswire, Portland Indymedia

The fascist financiers of the Money Party are growing restless. Occupy Wall Street began with a call to action from the activist online group Anonymous in August. It was barely featured in the mainstream or alternate media. Instead of a small crowd that could easily be ignored then disbursed, fifty thousand citizens showed up at the headquarters for the world financial system, Wall Street. Despite the best efforts of Mayor Bloomberg and NYPD, the Occupy Wall Street continues. The message went out to the country and the world. Now, there are over 100 occupy events in Oakland, Kansas City, Washington, DC, and elsewhere. (Image: K. Kendall)
END_OF_DOCUMENT_TOKEN_TO_BE_REPLACED

9/11, WTC7 and the Black Eagle Trust: How Bank of New York may have laundered $240 billion

“On that fateful day, the Securities and Exchange Commission declared a national emergency, and for the first time in U.S. history, invoked its emergency powers under Securities Exchange Act Section 12(k) easing regulatory restrictions for clearing and settling security trades for the next 15 days. These changes would allow an estimated $240 billion in covert government securities to be cleared upon maturity without the standard regulatory controls around identification of ownership.” ~E.P. Heidner

Few people are aware of the huge Black Eagle Trust fund, let alone its critical relation to the 9/11 attacks. A brilliant summary of excellent information regarding this covert fund compiled by meticulous researcher E.P. Heidner ties together many previously unexplained threads in the 9/11 mystery in ways that are most compelling. Heidner presents volumes of solid evidence to support his thesis that one of the main reasons for the attacks was to cover up the laundering of over $200 billion in bonds from this secretive fund that were to come due the day after 9/11.

END_OF_DOCUMENT_TOKEN_TO_BE_REPLACED

William Engdahl, *Gods of Money: Wall Street and the Death of the American Century*

Globalization and de-industrialization were the opening moves of the trap- privatization is the trap closing on our necks.  Of course the rest of the world has been experiencing all this for a long time; but we are no longer the minor beneficiaries of American Imperialism, we have become the next course in its move to devour the world.- Claudia

Find the book at: Amazon Review of: Gods of Money: Wall Street and the Death of the American Century (Paperback) by Reg Little

END_OF_DOCUMENT_TOKEN_TO_BE_REPLACED

Why Aren’t Lehman Bros in Handcuffs Yet?

From around the web, several sources are questioning Lehman Brothers’ rampant thievery and cover-up facilitated by corporate media:

END_OF_DOCUMENT_TOKEN_TO_BE_REPLACED

NY Times Bestselling author of Economic Hitman, John Perkins, explains in excerpts from his new book, Hoodwinked: An Economic Hitman Reveals Why the World Financial Markets Imploded—and What We Need to Do to Remake Them, that the US lives under a corporatocracy, with US policy captured to serve corporate profits rather than the public good.

END_OF_DOCUMENT_TOKEN_TO_BE_REPLACED 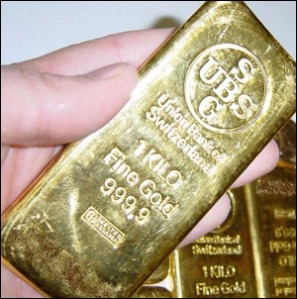 It’s one thing to counterfeit a twenty or hundred dollar bill. The amount of financial damage is usually limited to a specific region and only affects dozens of people and thousands of dollars. Secret Service agents quickly notify the banks on how to recognize these phony bills and retail outlets usually have procedures in place (such as special pens to test the paper) to stop their proliferation.

But what about gold? This is the most sacred of all commodities because it is thought to be the most trusted, reliable and valuable means of saving wealth.

A recent discovery — in October of 2009 — has been suppressed by the main stream media but has been circulating among the “big money” brokers and financial kingpins and is just now being revealed to the public. It involves the gold in Fort Knox — the US Treasury gold — that is the equity of our national wealth. In short, millions (with an “m”) of gold bars are fake!

Who did this? Apparently our own government.