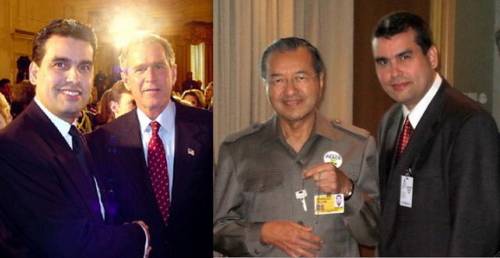 William Rodriguez, 9/11 Hero and the last man out of the Towers, with President George W. Bush at White House award ceremony; with Malaysian Prime Minister Mahathir Mohamad at a private 9/11 presentation.

By Richard Roepke
Before It’s News

Most folks know that William Rodriguez is the 9/11 hero who saved hundreds of lives, the last person to escape alive from the World Trade Center before they collapsed, and that his testimony that the basement of WTC1 exploded before the plane hit was ignored by officials. But many may not be aware that another maintenance worker reported the same for WTC2, or that three witnesses to events inconsistent with the 9/11 Commission Report who went public turned up dead — one of whom reported stepping over dead bodies in WTC7 before the Towers came down. Though lengthy, this investigative report reveals more details that deserve the attention of all who believe in truth and justice. ~Ed.

END_OF_DOCUMENT_TOKEN_TO_BE_REPLACED

In this edition of the show Susan Modaress interviews Alan Sabrosky, US Marine Corps Veteran.

Alan Sabrosky a writer and consultant, specializing in national and international security affairs discloses intriguing facts on the implication of Israel in 9/11 events that are by and large unheard of in mainstream media.

END_OF_DOCUMENT_TOKEN_TO_BE_REPLACED

A Time for Truth 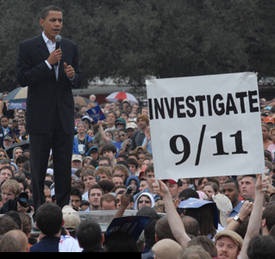 By Susan Lindauer
9/11 Whistleblower and author of Extreme Prejudice: The Terrifying Story of the Patriot Act and the Cover Ups of 9/11 and Iraq

Some of our leaders think Americans don’t need the truth about 9/11 any more, because Osama’s dead and it’s over.

As somebody who got brutalized at “ground zero” of the 9/11 cover up for most of the past 10 years, I could not disagree more. I’m sick of asking for a proper Congressional investigation. Congress already knows the truth about 9/11. That’s why they’re not poking around. However, it’s a huge mistake for the rest of us who know the truth, or parts of it, to wait for permission to speak. America has trapped itself in a mythic nightmare about terrorism that exaggerates our enemies, while our leaders manipulate our sense of patriotism and effectively blind us to mistakes in national security policy. It’s not a successful policy if it weakens our country.

END_OF_DOCUMENT_TOKEN_TO_BE_REPLACED

Posted in 911, Obama and Company, War and Peace

I now believe I have reasonable grounds to bring into suspicion that there may be a “false flag” terrorist attack during the Olympics in Canada, which take place in Vancouver and Whistler from Feb. 12th until Feb. 28th. I have compiled the following suspicious activity that I have found through various media sources. I’m not going to go as deep into each point as I could, and I will try to source information as best as I can, but some of it also comes from my own sources which I am not able to provide a link to.

END_OF_DOCUMENT_TOKEN_TO_BE_REPLACED

By Ernest A. Canning

Three separate “conspiracy theories” are used to show how the misuse of the term “conspiracy theory” as a means to dismiss any theory, whether supportive or destructive of official reality, is unscientific: JFK assassination, 9/11, and the 2004 election. END_OF_DOCUMENT_TOKEN_TO_BE_REPLACED