Agribusiness giant Monsanto, which genetically modifies plants to exude or tolerate pesticide or to produce nonviable seed, hired the services of the mercenary firm Blackwater to spy on activists, Jeremy Scahill reports. A death-tech firm weds a hit squad.

This is no doubt in response to a decade of GM crop sabotage efforts around the globe. END_OF_DOCUMENT_TOKEN_TO_BE_REPLACED 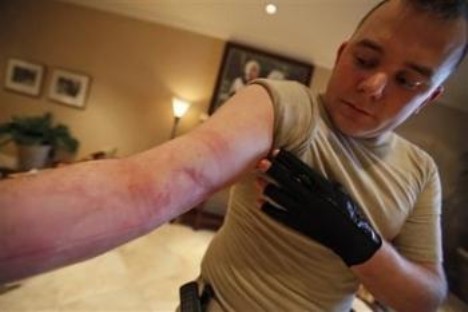 Pfc. Justin Shults shows some of the burn wounds he received after being electrocuted in a shower facility in Iraq, in this photo taken Wednesday, Jan. 21, 2009 in San Antonio, Texas. Shults suffered third-degree burns on 13-percent of his body. He is suing contractor KBR Inc. for faulty wiring of the facility. (AP Photo/San Antonio Express-News, Kin Man Hui)

Lawmakers tell Defense Secretary Gates they ‘are appalled by the Pentagon’s failure to pursue answers’ in death of Adam Hermanson.

END_OF_DOCUMENT_TOKEN_TO_BE_REPLACED

In April 2002, the CIA paid Blackwater more than $5 million to deploy a small team of men inside Afghanistan during the early stages of US operations in the country. A month later, Erik Prince, the company’s owner and a former Navy SEAL, flew to Afghanistan as part of the original twenty-man Blackwater contingent. Blackwater worked for the CIA at its station in Kabul as well as in Shkin, along the Afghanistan-Pakistan border, where they operated out of a mud fortress known as the Alamo. It was the beginning of a long relationship between Blackwater, Prince and the CIA.

END_OF_DOCUMENT_TOKEN_TO_BE_REPLACED

A former Blackwater employee and an ex-US Marine who has worked as a security operative for the company have made a series of explosive allegations in sworn statements filed on August 3 in federal court in Virginia. The two men claim that the company’s owner, Erik Prince, may have murdered or facilitated the murder of individuals who were cooperating with federal authorities investigating the company. The former employee also alleges that Prince “views himself as a Christian crusader tasked with eliminating Muslims and the Islamic faith from the globe,” and that Prince’s companies “encouraged and rewarded the destruction of Iraqi life.”