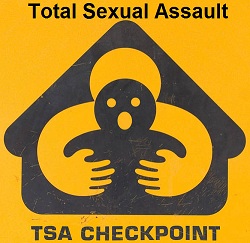 Alaska State Rep. Sharon Cissna of Anchorage was returning from Seattle when the TSA insisted on an intrusive hand exam at SEA-TAC Airport. Below is her statement:

PRINCE RUPERT, BC (February 21, 2011).  The following is Rep. Sharon Cissna’s account of the events of February 20th, 2011 at  SEA-TAC International Airport:

“The evening of the 20th of February 2011 started with relief, as I was anxious to get back to the important work of the Alaskan Legislature.  Heading into security after time with the line of passengers, I felt upbeat.  I’d blocked out the horror of three months earlier, but after the pleasant TSA agent checked the ticket and ID, I suddenly found myself directed into scanning by the Seattle Airport’s full-body imaging scan.  The horror began again.  A female agent placed herself blocking my passage.  Scan results would again display that my breast cancer and the resulting scars pointed a TSA finger of irregularity at my chest.  I would require invasive, probing hands of a stranger over my body. Memories of violation would consume my thoughts again.”