END_OF_DOCUMENT_TOKEN_TO_BE_REPLACED

The News of Empire

“Mr. Obama and his senior national security advisers have sought to reassure allies and answer critics, including many Republicans, that the United States will not abandon its commitments in the Persian Gulf even as it winds down the war in Iraq and looks ahead to doing the same in Afghanistan by the end of 2014.”

I pluck a paragraph from the New York Times and for an instant I’m possessed by Alfred, Lord Tennyson, aquiver with puzzlement down to my deepest sensibilities. I hold you here, root and all, little paragraph. But if I could understand what you are, root and all, and all in all, I should know what empire is, and hubris . . . and maybe even, by its striking absence, democracy.

The paragraph contains the careful verbiage of exclusion, which is the only language in which the geopolitical powers that be are able to communicate.

END_OF_DOCUMENT_TOKEN_TO_BE_REPLACED

The Logical Outcome of the Occupy Movement

Hopefully many of you are realizing exactly what options remain. If we can’t change American politics through the ballot box, what alternative is left?

When the media asks people in the Occupy Movement what it is they want, the answer given by those that understand what the movement is all about, give their reasons for being there but add that they are not speaking for the movement, only for themselves. This is the purest form of democracy. Claiming to represent anyone else besides you is the correct way to respond. Most of us have many of the same goals, but it would be presumptuous to say that anyone represents the movement.

One thing has become abundantly clear, and this is probably the most important part of the movement; most of the 99%’ers are not asking the United States government to do a thing.

END_OF_DOCUMENT_TOKEN_TO_BE_REPLACED

Oakland Use of Illegal Force

Why Wall Street Is Not Enough, This is War

The disease is police forces in a nation of laws violating those laws, those who are supposed to protect the public safety making it more than clear to us here at VT that they are willing to stoop to criminality to work for the 1%.

END_OF_DOCUMENT_TOKEN_TO_BE_REPLACED

Rioting Across America – The Great Depression

END_OF_DOCUMENT_TOKEN_TO_BE_REPLACED 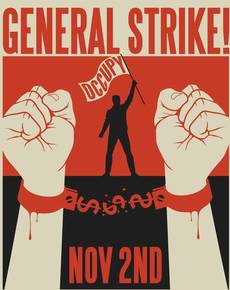 Oakland is going to observe a general strike on November 2. The strike will be “against the growing gap between the rich and everybody else,” said the website of Occupy Oakland. “The whole world is watching Oakland,” OO said in a statement. “Let’s show [the world] what is possible.” The OO announced on its website that it is planning a march to the Port of Oakland, the US’ fifth busiest, to “shut it down.” New agency reported that tens of thousands of people are expected to participate in the general strike. It was also reported that organized labor will extend support. These are signs of growing discontent.

The decision for city-wide general strike was passed by Occupy Oakland General Assembly by a 96.9% majority. The OO has urged other groups nationwide to organize similar events.

END_OF_DOCUMENT_TOKEN_TO_BE_REPLACED

Occupy What? A Short Guide to Real Change

Heretic Productions presents David Icke, in a fine diatribe about what should happen to bring an an end to the current dollartocracy.

END_OF_DOCUMENT_TOKEN_TO_BE_REPLACED

Shut It Down on Oct. 28th: National Strike

A momentum is occurring. People are uniting across the world. They are sending a message. The next step is fast approaching:

For one day we peacefully protest in a symbol that will be felt across the globe. We step out of the system and step back into ourselves.

Turn off all lights. Unplug all electrical devices. Abstain from using TV, radio and internet or phone. Abstain from making any purchase of any kind. Choose that morning to cancel any services you feel you no longer need. That morning call in sick to work.

END_OF_DOCUMENT_TOKEN_TO_BE_REPLACED

This morning I had a chance to interview award-winning writer, Prof. Michel Chossudovsky about the Occupy Wall Street movement.

Michel Chossudovsky is the President and Director of the Centre for Research on Globalization (CRG). He teaches Economics at the University of Ottawa and his books have been translated into over 20 languages.

Go to globalresearch.ca for more information.

END_OF_DOCUMENT_TOKEN_TO_BE_REPLACED

Occupy the Treasury and support HR 2990

Here is a plea, hot off the press, to take the private owners and dispensers of credit out of our bizarre monetary system, and restore the constitutional function of money creation to the Federal Treasury.

Dennis Kucinich introduced a bill that would do this, only four days after the Wall Street Occupation began ~ HR 2990 The National Emergency Employment Defense Act of 2011. It’s stunning and you will love it.

It ends ‘fractional reserve’ lending (the credit casino), nationalizes the Federal Reserve, restores the federal government’s authority to originate money (without debt), pays off federal debt with the new US money as it comes due, until the debt is completely retired.

END_OF_DOCUMENT_TOKEN_TO_BE_REPLACED

By Michael Franti and Spearhead

END_OF_DOCUMENT_TOKEN_TO_BE_REPLACED

Dr. Eowyn
Fellowship of the Minds

“Those who don’t know the game or are assets and manipulators of  the game will want to ‘endorse’ people and organisations they say they support  in cleaning up America – but they will be the very people and groups that are  systematically destroying America.” –David Icke, October 16, 2011

The movement that began as Occupy Wall Street in New York has spread to other cities across America as well as countries.  In Italy, the Occupiers instigated a riot in Rome, torching cars and smashing windows, which required armed police to be brought in.

In the name of equity, the Occupiers say they are the 99% opposed to the top 1%, the filthy rich. So who are America’s Top 1%?

END_OF_DOCUMENT_TOKEN_TO_BE_REPLACED

1 vs. 99: Keystone XL seizes private US land for oil to China

The NYTimes reports that TransCanada, a Canadian oil company, promises to confiscate private land from South Dakota to the Gulf of Mexico, and has already filed nearly 60 lawsuits against private US citizens who refuse to allow the Keystone XL pipeline on their property, even though the controversial project has yet to receive federal approval.

“Randy Thompson, a cattle buyer in Nebraska, was informed that if he did not grant pipeline access to 80 of the 400 acres left to him by his mother along the Platte River, ‘Keystone will use eminent domain to acquire the easement.’”

END_OF_DOCUMENT_TOKEN_TO_BE_REPLACED

Americans have been watching protests against oppressive regimes that concentrate massive wealth in the hands of an elite few. Yet in our own democracy, 1 percent of the people take nearly a quarter of the nation’s income—an inequality even the wealthy will come to regret.