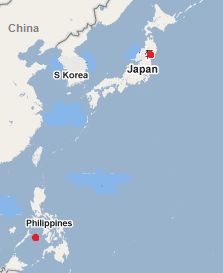 Address Japan Nuclear Threat with Truth and Precaution, not Misinformation

The threat to Filipino health and environment from the nuclear power plant disaster in Japan is serious and should not be downplayed. This threat should be addressed with truth and precaution and not misinformation. Government officials and the mainstream media repeatedly claim that there is no possibility that the nuclear radiation from Japan will reach the Philippines and that the radiation leak is minimal and poses no significant health risks. This is a gross misrepresentation of facts.

There is already a partial meltdown and it is not farfetched that a complete meltdown will occur, if it has not already occurred by the time this article is circulated. There is already a significant breach in the reactor core containment facilities, both immediate and secondary. There is no doubt that significant amounts of radioactivity had already been released into the open environment, exposing thousands of people within several kilometers radius. It is highly probable that this radiation pollution will worsen in the next few days and will most likely reach the Philippines.